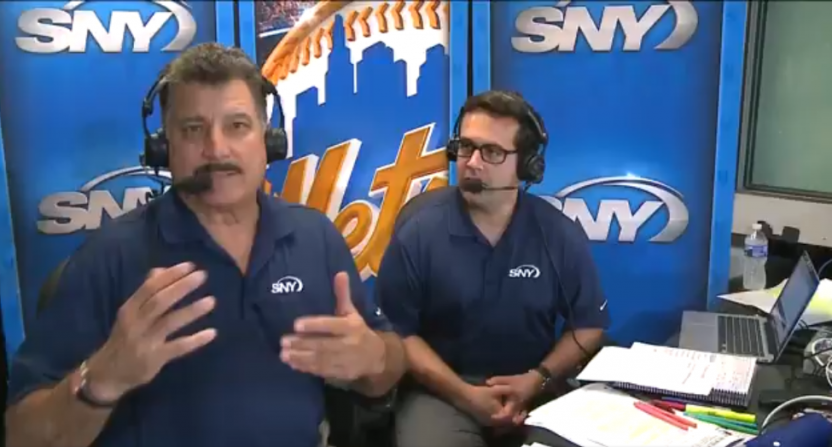 Amazingly, the biggest media fallout from the Miami Marlins’ Jose Ureña drilling the Atlanta Braves’ Ronald Acuña with the very first pitch of the game Wednesday may come from a broadcaster on a completely different game. That would be Keith Hernandez, the SNY Mets analyst, who decided to weigh in on this during their Mets-Orioles Wednesday broadcast. The situation already had provoked plenty of outrage across the web at Ureña and the Braves, but Hernandez decided to endorse Ureña plunking Acuña for the crime of Acuña’s previous home runs against the Marlins, saying “You gotta hit him”:

This is what Keith Hernandez had to say about Urena hitting Acuna. ??? pic.twitter.com/xeLszYDpic

“In today’s game, you don’t throw at hitters, so I don’t think they know, they don’t know how to get out of the way of a ball, or know it’s coming. But you hit three home runs, I’m sorry, you’re going to go down. You’re going to lean over the plate, you’re going to let them put a whupping on you? It’s not going to happen. And I know that happens in today’s game. Obviously, it’s the Marlins, I’m sure [manager] Don Mattingly ordered that, I don’t think the pitcher did, not today’s pitchers. There was a day where when you didn’t have to tell the pitcher, if he’s getting his fanny kicked, he would knock someone down. They’re playing the Cardinals, excuse me.” [They were not playing the Cardinals.]

“So you’ve got two teams fighting for a division, fighting for a wild-card.” [Play-by-play commentator Wayne Randazzo corrects Hernandez about the Braves playing the Marlins.] “Oh, they’re playing the Marlins, I’m sorry, I got messed up there. So you’ve got a team that’s out of it that’s retaliating, and that’s just part of the baseball code. If someone’s hitting home runs, leaning over home plate, I’m sorry, I’m not going to let you do that. Here’s one in your ribs, or on your back, and let’s see if you stay in there next time. That’s just my strong feeling.”

And it got even more notable from there:

Well, Hernandez was certainly correct that people were not going to like that. A sampling:

He played in an era when a struggling pitcher was expected to shake things up by drilling a batter, or when a hot hitter might get thrown at just because he was hot. I hope the sport has evolved forward from that, as it has with the use of helmets/etc. Just absurd.

Mets broadcaster @keithhernandez is advocating for intentionally hitting players when they’re playing well? Unbelievable and unnerving comments. How about throwing good pitches? Or, I don’t know, the novel idea of walking a guy. https://t.co/tOKw07Th17

Even Braves’ reliever Peter Moylan went in on Hernandez:

This is just next level bullshit!!!! The kid is playing the game with joy and needs to be hurt for being great. You are a clown @keithhernandez https://t.co/htnJZeQQ1o

Yeah, that one didn’t go all that well for Hernandez. And yes, Olney’s right that Hernandez played in a different era where this kind of logic was more popularly acceptable, and he can certainly state that on-air if he wants. But the backlash is far from surprising. And it will be interesting to see if there’s any fallout from this, including perhaps a recantation or apology, or if Hernandez will stick to his guns. In any case, it’s fascinating that the hottest media take on this came from a broadcaster calling a different game.