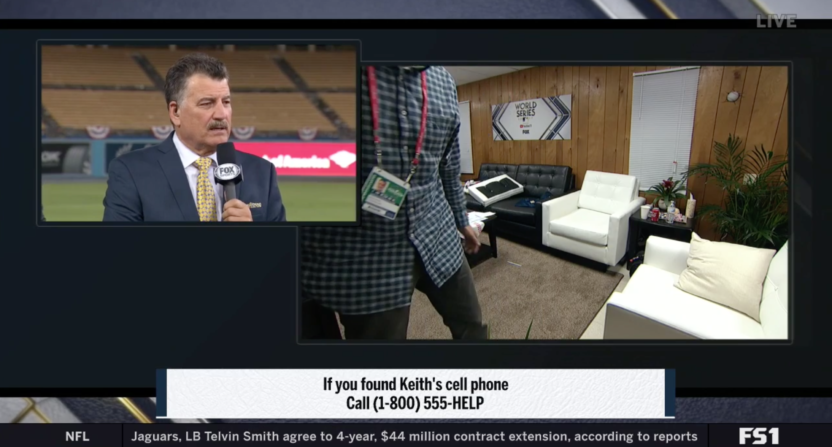 Anyone prone to occasional air-headedness can relate to how Keith Hernandez felt Wednesday night. The former Mets first baseman and current SNY/Fox baseball analyst was on set discussing the thrilling World Series Game 2 but was preoccupied by the fact he had misplaced his cell phone.

Hernandez’s dilemma became an issue of national import when Fox host Kevin Burkhardt paused the FS1 postgame show to inform America that the analyst’s phone, with an orange OtterBox case, was gone. The issue was so pressing, it turned out, that the network had sent a search party into the network’s green room to find the phone. Fox even flashed a chyron reading, “If you found Keith’s cell phone, call (1-800) 555-HELP.” But as Fox cameras showed two men digging under furniture, Hernandez solemnly revealed that, “Oh man, it’s not gonna be there. I left it out in center field. It’s not there.”

The 64-year-old Hernandez, who is comfortably the oldest member of the Fox studio crew, declared that, “That’s what happens when you’re not born into this,” as his colleagues giggled uncontrollably.

Minutes later, the saga of Hernandez’s missing phone reached a happy conclusion. As a growing crew of searchers continued to look under couches in the green room, Burkhardt pointed behind the set, down the left-field line, where the show’s stage manager was approaching with Hernandez’s phone.

Hernandez was naturally glad to get his phone back, although his excitement was tempered by David Ortiz grabbing it, poking at the screen and then — remarkably and hilariously — tossing it off set. Burkhardt spoke for all of us when he breathlessly asked, “Did you really just do that?”

Anyway, we are quite glad Hernandez recovered his phone. Now we can only hope Ortiz didn’t break it.