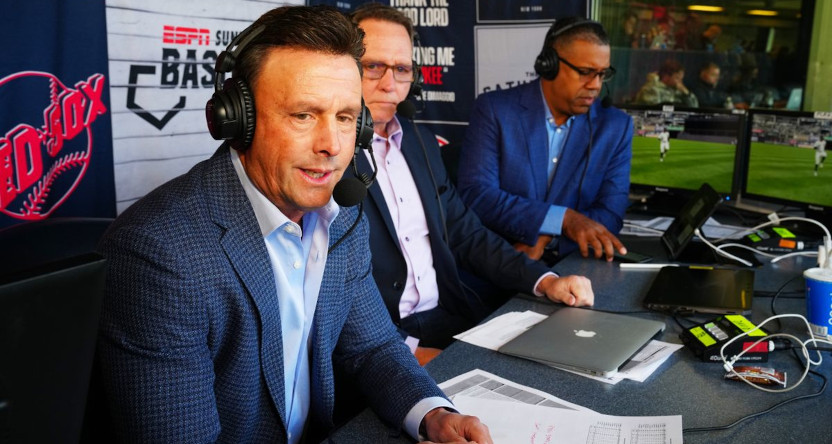 There’s been a long history of mic’d up players and coaches in many different sports. But MLB has taken it to a new level the last couple of years, having players regularly wear microphones for live conversations with the broadcast booth, not just later-running features.

This MLB approach started with All-Star Games and spring training, then was used in the regular season for the first time during the pandemic-shortened 2020 season. It went away last year, but has been brought back, making 2022 the first full MLB season to regularly feature this. And there are potential observer effect pitfalls to that, where a distracting broadcast question at the wrong time might impact an on-field result; that’s why this started with games that didn’t particularly matter. But it’s since been dialed up to regular-season games, and there haven’t been too many cases of it going poorly from a distraction standpoint.

In particular, ESPN has been mic’ing up players weekly on Sunday Night Baseball. (They’ll have Atlanta Braves‘ third baseman Austin Riley wearing a mic for tonight’s game against the St. Louis Cardinals.) And that’s led to some pretty great conversations, including two with Boston Red Sox outfielder Alex Verdugo. Sports Illustrated‘s Emma Baccellieri got some notable insights from both the broadcast and players’ sides in a feature on this this week, with both ESPN SNB play-by-play voice Karl Ravech (seen at left above during a SNB broadcast in April) and Verdugo discussing how they’re able to make this work without it being distracting to players:

“They’re doing their job,” Ravech says. “We don’t ever want to interfere with that.

“We trust them to speak when it makes sense, and they trust us to ask questions and realize, look, there may have to be a pause here.”

…And as for what it means to hold a conversation while trying to do his job? It’s actually kind of nice, [Verdugo] says, to have something else to focus on while standing by himself in the outfield.

“I’m always all over the place,” Verdugo says. “Like, I’m focusing on the game, but I’m always looking at everything, right? So this was cool.”

Verdugo has an interesting perspective as someone who’s done this twice, with him enjoying a July Sunday Night Baseball mic’d up appearance against the New York Yankees enough that he volunteered to wear the mic again this past Sunday against the Orioles. And Baccellieri’s piece notes that that’s happened in general for ESPN; they started off having to approach people every week, and they’re now getting quite a few players volunteering. So that speaks to this not being particularly bothersome for the players. (And because it’s opt-in rather than mandated, those who think it might disrupt their on-field concentration can just decline.)

There’s another notable tidbit in there on the profanity that sometimes gets picked up on these mics. That certainly isn’t unique to ESPN broadcasts (one of those previous examples is from Fox), or to player mics (many of the most notable f-bombs have come from other stadium mics, or umpire or manager mics, not player mics, and they’ve also shown up in interviews), or to MLB (we also regularly see it in golf, the NFL, the NBA, college basketball, and more). But ESPN senior coordinating producer for baseball coverage Phil Orlins told Baccellieri “From a tactical standpoint, we actually do have a way to eliminate the player microphone for a few seconds without affecting the rest of the audio,” so they can cut mics in situations where players are both running for a ball or there’s a close play on the basepaths. And that might explain why we haven’t heard a ton of these on player mics on Sunday Night Baseball.

There have certainly been some worthwhile additions to MLB broadcasts from these player mics. The conversations have often been excellent, and they often have fit in well to the broadcast rhythm. As Orlins told Baccellieri, baseball “offers spaces that are wonderful and really important to the character of the sport,” so there’s room for these exchanges with the booth in a way there might not be in other sports.

But there have also been great moments from players just talking through their own play and thought processes, from Cincinnati Reds‘ first baseman Joey Votto discussing both his defensive and hitting approaches on an ESPN2 Opening Day broadcast this year earlier this year to Toronto Blue Jays‘ pitcher Alek Manoah delivering an incredible breakdown of his pitch-by-pitch approach on Fox’s All-Star Game broadcast last month. And overall, these conversations have added a fair bit to many broadcasts. So it’s good to hear that both the broadcasters and the players involved are thinking about how not to disrupt anything that’s happening on the field, as that will likely be key to keeping this practice going in the longer term.