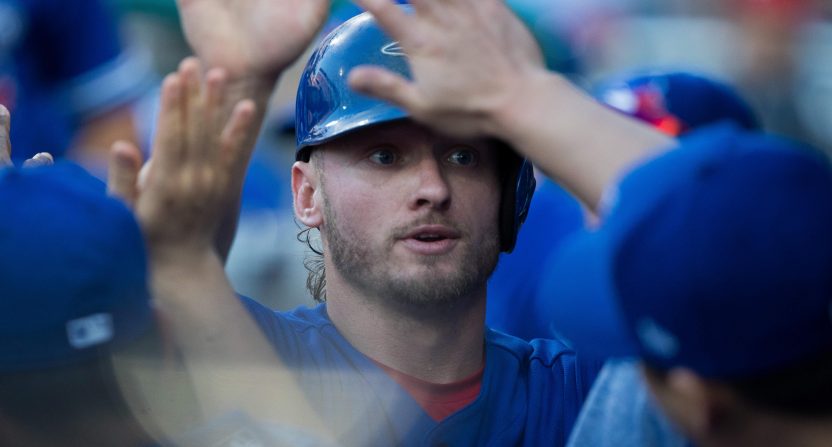 Cleveland Indians third baseman Josh Donaldson had been in the process of signing a new deal with the Toronto Blue Jays before they traded him to Cleveland. At least that’s what we thought. But according to Donaldson’s agent Dan Lozano, that may not have been the case.

Lozano put out a statement criticizing Fancred writer Jon Heyman of being incorrect in his reporting that Donaldson had an offer and turned it down. Things got personal when Lozano insinuated that Heyman had some sort of bias against Lozano’s agency, MVP Sports Group.

“Just as in February, when Jon Heyman mis-reported information “according to friends” of Josh Donaldson, he once again is incorrect regarding contract negotiations between Josh and the Blue Jays. The fact is that the team never extended an offer to Josh, no years or dollars were ever specifically discussed, and it’s unfair to Josh for someone to repeatedly misrepresent his business affairs citing their “beliefs.” This is not the first time Jon has been reckless in his reporting about an MVP Sports Group client, and I believe it’s clear his motivations have less to do with the truth than they do with his other agenda.”

Donaldson responded to Heyman back in February and claimed that while he respected Heyman’s profession, he didn’t receive an offer and wished Heyman would get someone on the record the next time he reported about Donaldson’s contract situation.

@JonHeyman I respect what you do for a living, but you don’t know my friends. Nor do my friends know what I want, because there is still information to be gathered. I havn’t asked for anything. What I have said is I would like to stay. Cont. https://t.co/mCKqqj9OR1

@JonHeyman I would listen to an offer, but I havnt had one to listen to so it’s been pretty easy. Thanks for your concern about my future and next time I hope you put a name by it, because you are using my name in a manner I don’t appreciate.

Clearly, this is a game of “he said, he said” and we’re probably not going to be able to figure out who is correct. Lozano puts out a rather heavy accusation against Heyman for pretty much saying he made up the news and if anyone would know if the Blue Jays didn’t offer Donaldson a contract, it would be Lozano.

On the other hand, where is Heyman’s motivation to lie in this situation? Lozano notes an “agenda” and that it somehow involves MVP Sports Group but the only thing I could find via a Google search is a couple posts from when Heyman was at CBS Sports referring to Lozano as a “controversial agent” and linking to a pretty scathing Deadspin report about Lozano from 2011.

Considering Donaldson didn’t have much leverage given that he had occasional injuries this season and the Blue Jays have Vladimir Guerrero Jr. waiting in the wings, I can see why Donaldson and Lozano would be upset about Heyman’s reporting. Especially since Donaldson and Lozano were trying to seek out a long-term deal and unfortunate circumstances prevented that from happening. But being upset at somebody’s reporting and accusing them of having an agenda against you are two very different things and that could have potential repercussions in the future.