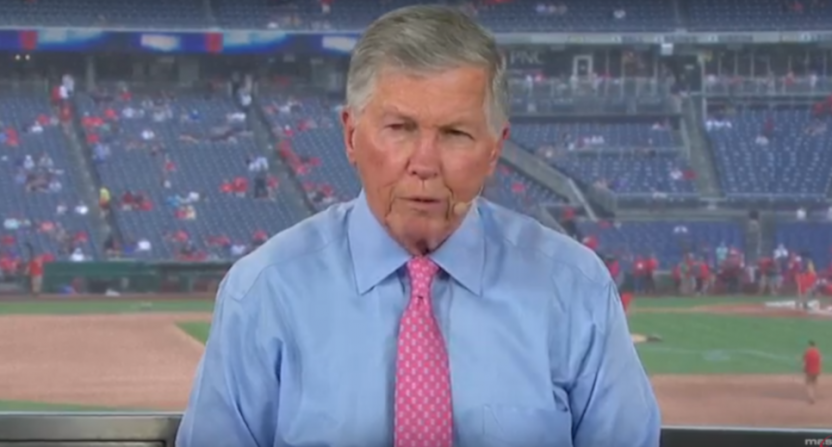 The Washington Nationals’ pre- and post-game shows on MASN will look entirely different in 2019, the first major overhaul they’ve seen in over a decade. Last month, the team decided not to pick up a contract option for analyst Ray Knight, who had been in that role since 2007, but was pulled off Nationals’ broadcasts in September after a reported verbal altercation with a MASN employee (he was also charged with assault and battery over a fight in 2017, but those charges were eventually dropped). Now, famed D.C. broadcaster Johnny Holliday, who’d been hosting the Nationals’ pre- and post-game shows since 2006, is also stepping away.

The 81-year-old Holliday is well-known in the D.C. area for his work as the full-time voice of Maryland Terrapins football and basketball, a role he’s held since 1979. He’s going to continue with that, but decided that Knight’s exit marked a good time for him to leave his Nationals’ work, especially with the travel it involved. Barry Svrluga of The Washington Post has more:

When the Nationals are home, the shows originate from Nationals Park, which was an easy commute from Holliday’s Kensington home. But when the team is on the road, the shows are broadcast from a studio in suburban Baltimore, and the nightly travel began to wear on Holliday.

“With Ray gone, seems like a good time to back off a little,” Holliday wrote in an email. “Now I will have more time with family and I have a very happy wife, as you might imagine.”

It makes sense for Holliday to pick this time to leave, with his long-time partner exiting and travel causing him some issues. And that probably works well for both him and MASN; he can focus on his Maryland work, while they can start completely fresh with a new studio show without worrying about if whoever they tab as analyst would fit both with Holliday and with an eventual replacement for him.

Svrluga mentions some in-house possibilities for the studio show, including sideline reporter Dan Kolko and Byron Kerr (who covers the Nationals for MASN’s website), and it will be interesting to see if the Nationals go with those or if they go further afield. In any case, the MASN Nationals pre- and post-game shows are going to be very different in 2019.