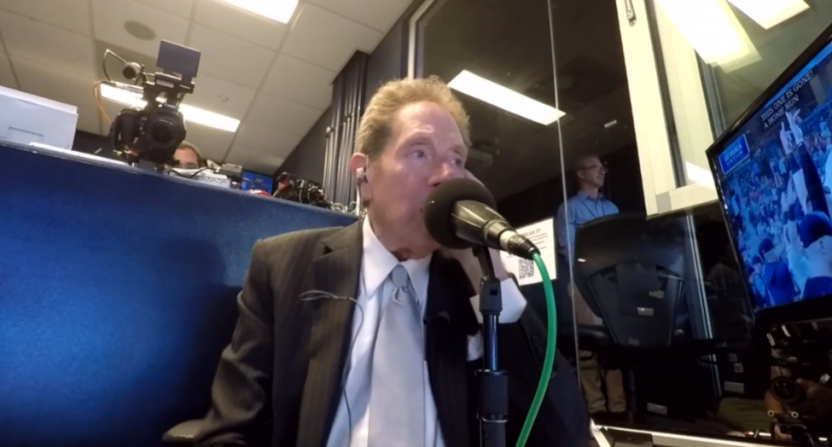 Long-time New York Yankees’ radio play-by-play voice John Sterling (who’s held that role since 1989, and only saw his streak of 5,060 consecutive games called snapped earlier this month) is profiled on this week’s edition of HBO’s Real Sports With Bryant Gumbel, and the profile has some interesting elements. Gumbel hosts this segment himself, and it features him in conversation with Sterling, plenty of Sterling’s calls (good and bad), a look at Sterling’s apartment, and commentary from Sterling’s WFAN broadcast partner Suzyn Waldman and Yankees’ manager Aaron Boone. One of the most notable parts comes from Sterling’s reaction to various criticisms of him (including bashing of his dramatic home run calls) as relayed by Gumbel:

Waldman, who’s been the primary color commentator for Yankees’ radio broadcasts alongside Sterling since 2005, also tells Gumbel that Sterling’s approach produces either love or hate from fans.

“John is different. There’s no other John Sterling out there. John is one of those that you either emotionally love him or you don’t.”

Sometimes with Sterling, that goes wrong, and there are some examples in the segment, with his “High, far, gone!” home run call in particular ending poorly when the ball goes foul or is caught. But Sterling told Gumbel while he works to get things right, he’s not too concerned about criticisms or occasional errors.

That past gets some discussion here as well. Sterling told Gumbel broadcasting was a childhood dream for him, one he first adopted after listening to popular radio shows…and wanting to be the announcer who introduced them.

“I’m a little boy, and the radio is on, and the announcer said ‘Live from Hollywood, it’s the Eddie Bracken Show!’ But I didn’t want to be Eddie Bracken, I wanted to be that guy. …I listened to everything; newscasts, disc jockey shows, obviously sports. I knew I was going on the air.”

Sterling went on the air at 25, and he called baseball and basketball in Baltimore, New Jersey, Washington and then Atlanta. (That featured in him doing play-by-play for a Nets-Hawks game on YES in December.) He joined the Yankees’ announcing team in 1989, and has been mostly known for that role since. And he’s still making old-school references, including one in this segment to 1956 musical The Most Happy Fella. He told Gumbel he has no plans to change that, either.

“Am I caught in a time warp? Yes. That’s what I like and that’s what I have liked my whole life.”

Sterling is 81, but he’s said repeatedly he has no plans to retire “as long as I have a voice.” And he told Gumbel he doesn’t think age is slowing him down.

“I go on the air and it’s the same thing. One day it will happen and I won’t feel good about it, but right now, not yet.”

The whole feature on Sterling (produced by Nick Dolin) can be seen on the latest episode of HBO’s Real Sports With Bryant Gumbel, which airs Tuesday at 10 ET/PT on HBO.