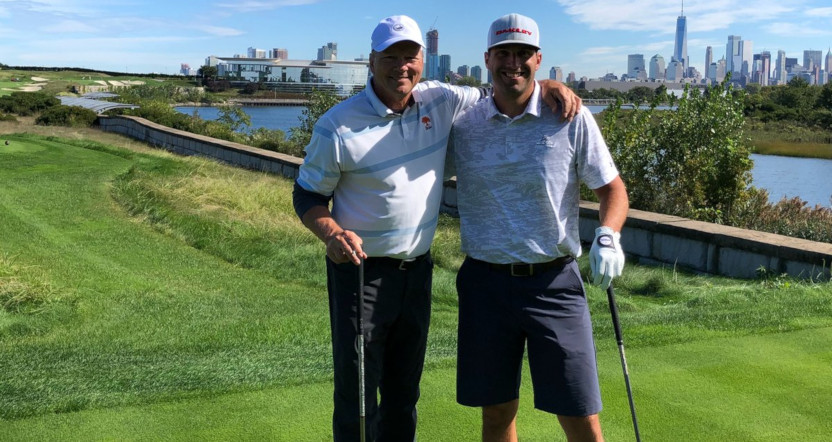 There may not be much live sports on right now, but there are plenty of discussions of past events, and some of those involve some notable broadcasters. One in particular involves a 2007 golf game between John Smoltz and Jeff Francoeur, both members of the Atlanta Braves at that point and both current broadcasters (Smoltz with MLB Network and Fox, Francoeur with the Braves’ telecasts on Fox Sports South). MLB.com’s Mark Bowman wrote about that game (and other Smoltz golfing adventures) Wednesday, sharing accounts from Smoltz, Francoeur (seen at right above golfing with fellow Braves’ commentator Joe Simpson in 2018), and Braves’ player turned ESPN analyst Larry “Chipper” Jones. Here’s how Bowman describes what happened on the 18th hole in 2007 at the Ritz-Carlton Grande Lakes course in Florida, near where the Braves held spring training at that time, with Jones entering with a five-shot lead but coming up short:

Even if Smoltz birdied the hole, Francoeur would have still won with a triple bogey or better.

“So he sets up as only Frenchy can do and tries to rip his driver 700 yards. He pulls it left into the water,” Smoltz said. “If he’d have just dropped down by the water, I couldn’t beat him. So real quickly, I said, ‘You know, there’s not much advantage by dropping down there. You might as well re-tee it.’ So, he re-tees and he hits it farther left in the water.”

“After he hit the second one in, everybody was like, ‘Oh boy,’” added Jones.

“So I said, ‘You know the drill, might as well re-tee again,’” Smoltz said. “This time, he’s trying to hit it so far right that he pull-hooks it out of bounds. So now he’s hitting seven off the tee. I’m foaming at the mouth. He hits his next drive and it hits land before going in the water.”

…”Each and every shot, you could see him getting angrier and angrier.”

Jones wound up recording a 14 on that par-5 hole, and Smoltz birdied it, giving him the easy win. And as Bowman relates, Smoltz used that as an excuse to make fun of Francoeur for quite some time, telling cart servers to tell Francoeur any drink was $14 and telling club pros to tell Francoeur the entrance code was #14. So this led to quite a lot of jokes. And as Bowman relates, Francoeur did beat Smoltz at the Seminole Golf Club in Juno Beach, Florida a few weeks later, but still hurt himself in the process; he jumped into the Atlantic Ocean afterwards, but forgot that they’d agreed to play 36 holes, so he had to go buy new clothes before losing the next 18 to Smoltz.

Of course, it’s no particular surprise that Smoltz wound up on top here. He’s long been viewed as one of the best athlete golfers out there, and he even qualified for the U.S. Senior Open in 2018 and played three Champions Tour events in 2019. But it’s still amazing to read in detail about Francoeur blowing a five-shot lead and recording a 14 on one hole. And we very appreciate Bowman providing us with the details of this famous golf clash between future broadcasters.