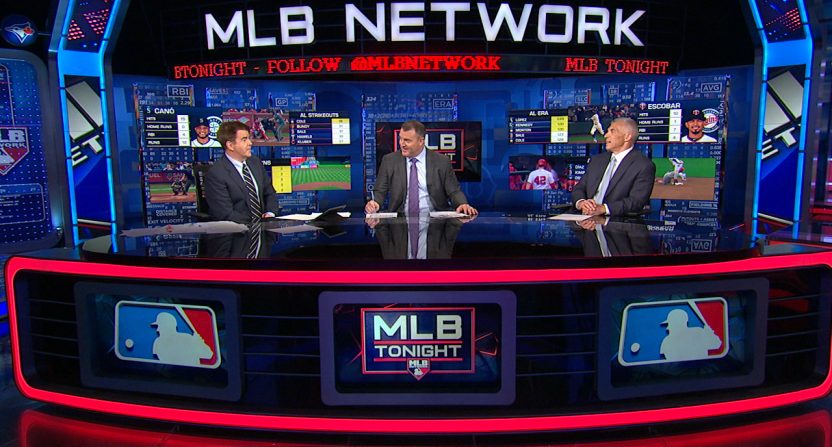 It certainly seems like Joe Girardi is ready to have a lot on his plate.The 54-year-old former MLB player and manager for the Florida Marlins and New York Yankees is ramping up his responsibilities at MLB Network, including calling Tuesday’s MLB Network Showcase between the New York Mets and Chicago Cubs alongside Bob Costas and Jim Kaat. That will set up Girardi’s September, when he’ll appear across the network’s studio programming, including MLB Now and MLB Tonight.“This is really a fun time of year to be calling games and seeing what one day does to the next and what it means,” Girardi told Awful Announcing over the phone from the network’s New Jersey headquarters. “It’s just really enjoyable to be around two people [Costas and Kaat] that have seen so much in the game.”As much as Girardi likes talking about baseball on TV, it’s no secret that he wants to manage again. He’ll get to do that this fall as Team USA’s skipper for the Premier 12 tournament, which will act as qualifiers for baseball’s return to the Olympics next summer in Tokyo. Paul Seiler, the executive director and CEO of USA Baseball approached Girardi in late April about the job, and it became a no-brainer.“We talked for maybe three hours and they offered me the opportunity,” Girardi said. “There’s something special about having USA across your chest. I jumped at it.”If Team USA qualified for Tokyo next August, would Girardi be interested in returning to the job?“You cross that bridge when it comes,” he said. “I can’t tell you what’s gonna happen tomorrow, let alone three months from now. I’ll worry about that when the time arises.”Though Girardi said he definitely wants to go back to managing on a full-time basis, that’s not to say the Illinois native wasn’t enjoying a more quiet life with his family. He described just being a husband and father, grabbing rebounds for his basketball-playing daughter, quizzing his oldest daughter for college and being a coach for his son’s summer league baseball squad.“I will not be the manager, I will be the assistant coach,” Girardi clarified. “So all the complaints go to the manager.”Girardi appears ready to once again take on the complaints and scrutiny and go through the grind of being a big league manager. The teams he’ll be calling on Tuesday, New York and Chicago, could both have open positions in the offseason where Girardi would be a top choice if interested. And if he was intrigued by those possibilities, Girardi definitely didn’t show those emotions and played it close to the vest on the phone, explaining his perspective from someone who’s been fired before.“I’ve basically been let go twice, and it’s no fun,” Girardi said. “It’s not something that you wish upon anyone. So I hope every manager keeps their job because I know what it feels like.”Girardi’s past experiences, as with most people, helped shape how he’s useful as a color commentator and TV talking head. After carving out a 15-year playing career, Girardi did some broadcasting work with YES in 2004, and was a pre and postgame analyst for Fox for a few games during the 2006 World Series. His tenure as Marlins manager ended after one Manager of the Year campaign in 2006, and he returned to YES for the 2007 season before taking the Yankees job for 2008.“I hadn’t really broadcast a game since 2007, so there were some nerves,” Girardi said. “It was just getting comfortable with the process. I wasn’t necessarily nervous about being on camera or talking baseball. It was the process of how to prepare when you didn’t have everything at your fingertips.”

Girardi had to get used to soliciting people for help in terms of research rather than having troves of information at his disposal like he had as a manager. But he said he’s enjoyed working in the booth and the studio with former peers and competitors like Pedro Martinez, Jim Thome, Dan Plesac, and Mike Lowell. When it’s his turn to talk and not have to think about the cameras or the preparation, he’s able to focus and give the viewers his unique and experienced perspective on what’s going on.“Whether it’s the catching perspective, managing, how you work a bullpen, how you do different things. That’s how I see the game,” Girardi said. “I’m not gonna try to be someone that I’m not.”Who Girardi is, is a data and research nerd with an engineering degree from Northwestern.“I have a bunch of notes in front of me right now,” Girardi said, as he was preparing to appear on an afternoon studio show. “And I choose to write things out, because I think you remember it better than if you look at an iPad. So that’s how I’ve always done it. And I’m a very analytical guy. It’s kind of the way that my mind works. I’ve always enjoyed math and science and school.”Girardi became known in his days as Yankees manager for his thick binder of notes on what to do in certain matchups, especially concerning his bullpen and pinch hitting. While he said he’s kept every scorecard from his managerial career, he’s only kept binders from his last couple of years with the team.“I think keeping anything beyond that didn’t really make sense,” Girardi said, happily debunking the potential myth that he was a binder hoarder. “As far as keeping all the notes I wrote, too many names change from year to year, and they change places. And players change from year to year. So you have to write new notes anyway.”Asked to share some notes on his Yankees successor Aaron Boone, Girardi was nothing but complimentary of the second-year skipper.“I mean they’re in first place, I think that speaks for itself,” Girardi said. “He’s had to deal with a number of injuries, injuries to star players, and they’ve continued to be extremely productive and play well.”Girardi has become more publicly productive away from his home life, calling games, gearing up for Team USA in the fall and even some taped features for MLB Network, including a recent tutorial on hauling in pop-ups as a catcher.“I thought that my pop-up catching abilities have fallen off dramatically,” Girardi said, relieved that a ball didn’t hit him in the face, “but I was able to make enough plays that we were able to put a feature together.”Girardi could undoubtedly be a Major League manager next season, but for now he’s just enjoying baseball and taking everything in as it comes.”I’m talking about a game that I truly love and watching the great athletes and the things that they’re able to do,” he said. “The one thing about baseball that I remember Don Zimmer saying to me is ‘you’ll never see everything.’ So you’ll see things in games that you’ll say ‘man, I’ve never seen anything like that.’ And sometimes you’ll chuckle, sometimes you’ll just be in amazement. And that’s what I like about this game, because it’s always changing.”