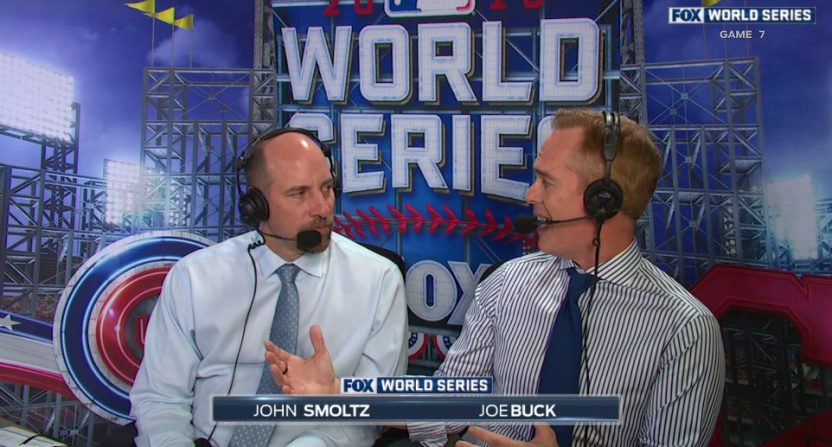 Through at least 2021, the World Series TV broadcasts will still be called by Joe Buck. As per Andrew Marchand of The New York Post, Buck has signed a contract extension with Fox for three years beyond the two already remaining on his contract, and he’s said that he’ll keep calling the World Series while Fox has the rights. (Their current deal runs through the 2021 season, and they may wind up landing rights beyond that.)

This is a change from what Buck has previously said. Back in December 2016, he told Tim McKiernan of 590 The Fan in St. Louis that he was contemplating not calling the World Series after his contract ended in 2019:

“Yeah, I think I — I love it — but I’ve been doing it for a long time and I feel like somebody else should do it. I’ve done enough. I’m signed for three more World Series, and that’ll be 22 — which is stupid to even think about. If somebody said right now, before I walk outta here, you’re done, I’ve had the greatest career miles beyond anything I could have ever dreamed.

But I would like to get some of my time back and be at home, be in St. Louis, be with my wife and watch my kids, even though they’re 20 and 17, and doing their own thing. I’ve been gone a lot this year, and I’m not crying about it. I love it. But I need to take stuff out.”

And that desire to spend more time with his family could have grown even more recently, as Buck now has three-month-old twins with his wife Michelle Beisner-Buck (an NFL reporter for ESPN). He’s also being asked to do more NFL work, as Fox has named him and Troy Aikman as their lead team for Thursday Night Football (which is what led to this renegotiation/extension in the first place).

But in exchange for that, Fox has dialed down how many NFL Sundays Buck will have to call, and he was already doing less regular-season MLB than he had at some points in the past. He told Marchand his decision to stick with the World Series is partly about Fox working with his schedule (saying “Fox has been so good in letting me shape my calendar year that by the end of it, I’m ready to start back up again,”) and partly about how he’s enjoyed working with analyst John Smoltz (his MLB booth partner since 2016), saying “If there is one person who has kind of changed that for me, it is John Smoltz.”

So Buck is going to be calling World Series games through at least 2021 now, two more years than he was initially signed for. And with his overall Fox deal now running through 2022, he could add at least one more if Fox is able to retain the World Series rights. And Buck is only 49, so there could be lots more ahead for him; while he still takes some flak on social media, he told Marchand he doesn’t really pay much attention to that, and there’s a growing consensus amongst broadcasting critics that he’s improved substantially over the years. He also seems to be taking himself less seriously than he did at some points earlier in his career, poking fun at himself in cameos on Brockmire and talking pot brownies with Dan Le Batard; while there are still some who don’t like Buck, he’s certainly improved his ratings with some recently.

And Fox executives still like Buck, and that’s what really matters. He told Marchand that the only Twitter account he worries about is the one belonging to Fox Sports president Eric Shanks, and this deal makes it clear Shanks still wants him around. And maybe Fox will get further World Series rights and Buck will keep calling these games into the future. Maybe we’ll even get to see him call the top of the 47th one day:

[The New York Post/screencap from doblu.com]