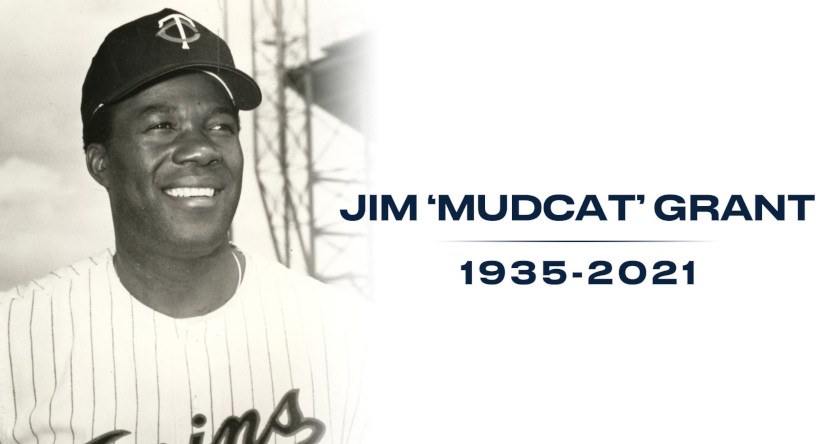 One of Major League Baseball’s remarkable figures has passed away at 85. Jim “Mudcat” Grant played in MLB from 1958-71 with the Indians, Twins, Dodgers, Expos, Cardinals, Athletics, Pirates and Athletics again, making a big mark there. His impact was particularly felt with the Twins in 1965, when he became the first Black AL pitcher to win 20 games (he went 21-7) and helped them make the World Series, delivering starting wins in Games 1 and 6 (plus hitting a three-run homer in Game 6 and throwing five innings of relief in Game 5).

During his career, Grant also sang in nightclubs with his “Mudcat and the Kittens” group, and gained a lot of fame for his musical skills. After his playing days, he went on to be a broadcaster with both the Indians and A’s. During his time as a broadcaster, his “a little chin music” phrase about high and inside pitches took off. He continued with music as well, playing on TV shows hosted by Johnny Carson and Mike Douglas, singing the national anthem ahead of an A’s game in 1970, and performing with Count Basie and Duke Ellington. He even hosted a TV variety show in Minneapolis.

“It was definitely special for me,” Grant said at a recent TwinsFest. “I didn’t know there was never an African-American pitcher who won 20 games in the American League. As the season progressed, I started getting all kinds of mail, and even Howard Cosell called me a couple times when I got to 18 wins. So, it was really special.”

As Grant got older, he understood the significance of the milestone, and it became his mission to celebrate the accomplishments of the Black Aces (http://www.theblackaces.com/), African-American pitchers who won at least 20 games. Grant’s book, “The Black Aces: Baseball’s Only African-American Twenty-Game Winners”, came out in 2007, and since then Carsten Sabathia and David Price have joined the exclusive club.

“It was a lot of fun doing that book and doing all that research,” Grant said. “I found out so many things that happened and how African-Americans contributed to Major League Baseball. I think it’s just a wonderful thing.”

Beyond that, Grant was a regular figure advocating for Black history in baseball and working to improve Black participation in the game. As Bill Lubinger of The Cleveland Plain Dealer wrote around a January 2019 Cleveland Cavaliers game where Grant, Jimmy Jackson, Cris Carter and Jim Brown were honored in a “Black Heritage Celebration” of local athletes, Grant experienced plenty of adversity due to his skin color in both the minors and majors, but also got support from a wide range of teammates. And he spent a large amount of his later years trying to boost Black participation in baseball, including organizing tournaments.

As the number of black players in the majors has shrunk from more than one in four by the mid-70’s to about one in 10 last season, Grant has been out front of an effort to counter the trend.

“Do we just sit here and say, ‘Well, that’s too bad?’ No, you get out and you do something about it,” he said. “You provide a place of opportunity where kids can show some skills at an early age and maybe this will get bigger and bigger and we can motivate them to play this game.”

Grant was also a frequent figure at Negro Leagues Baseball Museum events, and president Bob Kendrick delivered a nice tribute to him Saturday:

Absolutely heartbroken over the news of the passing of my dear friend & creator of the Black Aces, Jim “Mudcat” Grant! I’ll cherish the many memories & can still hear his voice calling me “El Presidente!” RIP!?? @MLB @MLB_PLAYERS @MLBNetworkRadio @Twins @Royals @41actionnews RT pic.twitter.com/DANsJFiEAy

Some living members of the Black Aces chimed in with tributes to Grant as well, including Fergie Jenkins and Dontrelle Willis:

Saddened to hear about the passing of Mudcat Grant. The first Black Ace and basically wrote the book on pitching. One of my best friends. My thoughts are with the Grant family. You will be missed my friend. pic.twitter.com/uIKog3Lk7F

Things weren’t easy for Grant for much of his life, with his father dying when he was young, his mother having to go to work in a canning factory, and him having to work in a mill himself at 13. Even his “Mudcat” nickname came from a bad place. As he once shared, that started with white teammates of his in the minors thinking he was from Mississippi (he was from Florida), and calling him “Mississippi Mudcat.”

But the “Mudcat” name became one Grant eventually adopted himself over time, and it wound up being a good fit for his combination of athletic and musical skills. And he definitely brought those to the table often, including with this 2011 performance of “What A Wonderful World” at a memorial for former teammate Harmon Killebrew:

Grant will be missed by many throughout the baseball world. Our thoughts go out to his friends and family.