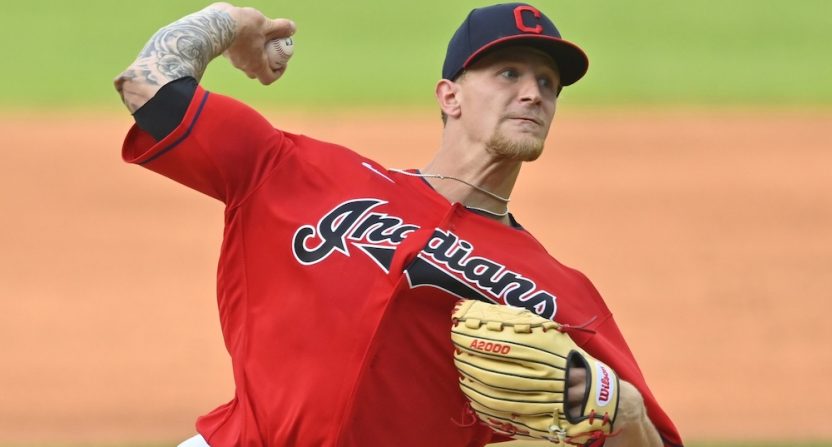 Cleveland Indians pitcher Zach Plesac isn’t happy with how his disregard for MLB’s COVID-19 protocols has been portrayed by the media. The second-year major-leaguer made his gripes Instagram official with a video he posted Thursday.

Anyone who thought Plesac might show some contrition for breaking protocols and putting his teammates at risk of contracting COVID-19 was immediately shown otherwise by the caption accompanying the video:

“Not an apology. Not a justification. The Truth.”

Plesac began the six-minute video by saying he wanted to “clear the air about some stuff, kinda voice my opinion, voice some raw emotion to you guys” before throwing a brushback pitch at the media.

“The media really is terrible, man,” said Plesac. “They do some evil things to create stories and make things sound better, make things sound worse. Truthfully, I’m disgusted with the way the media’s handled this whole situation surrounding our team. This is why, based on my feelings, I wanted to express the truth to you guys.”

Corona virus is REAL. Moving forward, it is our job to practice certain safety guidelines without letting it affect our quality of life. 🤍🙏🏼

Plesac then explained that he did exactly what had been reported, first by The Athletic. He went out with a group of friends, breaking the bubble-like scenario MLB is trying to maintain for its teams, and broke curfew. As a result, Plesac was put in quarantine for three days to make sure he hadn’t contracted COVID-19 and to prevent him from possibly infecting others in the Indians’ traveling party.

Maybe as The Athletic’s report was aggregated, Plesac’s night out was portrayed as a raucous night out at a Chicago bar among many patrons by some outlets. But the initial report by Ken Rosenthal and Zack Meisel said he (and teammate Mike Clevinger) went out with friends, violating team rules along with health and safety protocols. Going by Plesac’s standards, the truth was indeed conveyed to readers.

Plesac then attempted to justify his actions, saying “Things are inevitable. You’re going to see people, you’re going to socially interact. You can’t sit in a room all day is the truth of the matter.”

He’s correct in pointing out that the standards for a “safe” number of people to congregate with is constantly changing. But that’s been an issue throughout this pandemic. Scientists are continually learning more about the virus and how it spreads, so there are no definitive rules to be followed.

But Plesac asks, well, what’s a safe situation? How can he make sure no one is put at risk? Well, MLB laid that out for him with its stricter protocols. Stay in your hotel or go home. Don’t fraternize with people outside of teammates, coaches, staffers, and family. Don’t risk contracting the virus from people who aren’t being constantly tested for COVID-19 as MLB personnel are.

Plenty of people are going to agree with Plesac’s stance. We have no idea if everyone in the group he hung out with was each wearing a mask or maintaining any sort of distance. But it’s also readily apparent in looking at the news and social media that many don’t believe such measures are necessary or that COVID-19 is as serious as has been portrayed.

Based on his remarks, Plesac doesn’t appear to be one of them. He’s saying he showed judgment that may not have been bad because a doctor couldn’t provide a definitive answer.

There are also many who are predisposed to dislike the media, believing that the press is often out to shame people, especially amid this pandemic. Those who reported or aggregated this story are out to ridicule Plesac, to scold him for not following the rules that so many of us are.

(Would pointing out that Plesac isn’t wearing his seatbelt correctly in that Instagram video also fall under that category?)

But was any incorrect information actually reported? Even Plesac admits he broke protocol. Perhaps he doesn’t like that his Cleveland teammates were asked about what happened, that reporters were trying to create tension in the Indians’ clubhouse. Shane Bieber said Plesac “screwed up.” Francisco Lindor said, “You can’t put yourself first.” Adam Plutko was far more emphatic.

Adam Plutko on Mike Clevinger and Zach Plesac: "They hurt us bad. They lied to us. They sat here…and publicly said things they didn’t follow through on. … I’ll let them sit here and tell you how they’re gonna earn our trust back. I don’t need to put words in their mouths.

Is that what Plesac views as blowing this story out of proportion, as trying to create a problem where none existed, even though those quotes from Indians players clearly demonstrate otherwise?

In his three starts this season, Plesac has compiled a 1.29 ERA and 1-1 record with 24 strikeouts and two walks in 21 innings. He’s part of an excellent Indians starting rotation that leads MLB with a 2.39 ERA and a .197 opponents’ batting average.

Cleveland will likely be part of MLB’s expanded postseason based on the strength of its pitching, which is why the careless actions of two players possibly jeopardizing a chance at the team making the playoffs and playing for a World Series title was highlighted. What if Plesac and Clevinger contracted COVID-19 and caused an outbreak similar to what the Miami Marlins and St. Louis Cardinals have experienced? That’s what media and fans have been responding to.

But Plesac got to say his piece, thanks to social media. And you may agree or disagree with him, depending on your views of this entire situation. Yet criticizing reporters for doing what they’re supposed to do, relaying information to the public, makes Plesac look like a guy who’s angry and embarrassed over getting caught doing what he’s not supposed to do. Ripping the media is an easy way to try and deflect that.