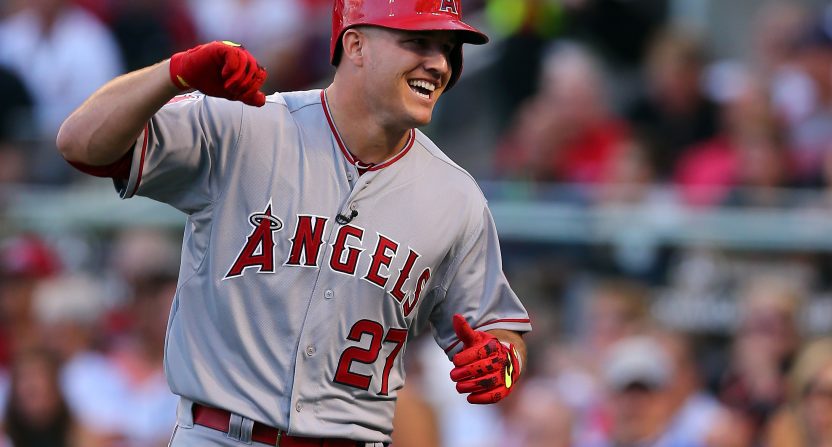 At just 26 years old, Mike Trout is rapidly building his Hall of Fame résumé and his place in Cooperstown is little more than a formality. He’s already a two-time MVP (with three more runner-up finishes) and a seven-time All-Star. Trout has led the American League at least once in on-base percentage, slugging percentage, runs scored, total bases, RBIs, walks, and stolen bases. In addition to that, he’s a near mortal lock to lead the league in Wins Above Replacement any time he plays a full season. Putting Trout’s numbers into historical perspective draws comparisons to the likes of Ruth, Mantle, Mays, Bonds, and the upper echelon of the sport’s most iconic names.

Mike Trout is to Major League Baseball as LeBron James is to the NBA or Tiger Woods to golf or Sidney Crosby to the NHL. At least he should be.

So how is Trout only as recognizable as an NBA reserve who was recently traded as part of a salary dump?

That’s the astonishing claim made in the Washington Post on the day of the MLB All-Star Game by Q Scores, a company that measures the awareness of public figures and their consumer appeal. According to their research, Trout’s best NBA comparison in the marketplace is Kenneth Faried, who was traded from the Denver Nuggets to the Brooklyn Nets to gain salary cap space. The all-world MLB slugger, on his way to becoming one of the all-time greats, is only as relevant as a player who averaged a career high 13.7 PPG in 2014 and appeared in 32 games last season.

Trout scored a 22 in Q Scores’ awareness category, Schafer said, which means a little more than one in five Americans even know who he is. The closest NBA player to Trout in terms of awareness among the general population, per Q Scores’s research, is reserve forward Kenneth Faried, who was traded by the Denver Nuggets to the Brooklyn Nets last week in a salary dump. If that’s to be believed, it means that if you stopped a random person on the street, they’d be about as likely to be familiar with a power forward who averaged 14.4 minutes last season as the hands-down best baseball player on the planet.

How can that be possible? Perhaps you’re a little bit skeptical about the comparison because it does seem ambitious to think that 20% of Americans know Kenneth Faried, especially considering the low national profile of the Nuggets. Perhaps it’s a fond remembrance of Faried’s heroics in leading Morehead State past Louisville in a first round upset in the 2011 NCAA Tournament.

The larger point remains, though. The average NBA player is much more recognizable than the average MLB player. And the gap between superstars is even more pronounced. Even if you think the Faried comparison is dubious, what if it was Andre Iguodala? Or David West? Or George Hill? Or Trevor Ariza? Wherever the true comparison is, it’s an unflattering, depressing reality for Major League Baseball.

So how does baseball ensure that the player that could define this generation doesn’t become a national afterthought? Trout is in the prime of his career – is there a way to suddenly increase national interest in his astounding numbers and all-around greatness?

For his part, it seems as if Trout is content with his lack of global superstardom. When speaking to the New York Times last season, he talked about minimizing his endorsement and sponsorship opportunities away from the field.

“There’s some endorsements you have to do, but for me, I try to minimize it,” Trout said. “During the off-season, I try to get my mind off baseball as much as I can. You don’t need those endorsements and photo shoots; it kind of brings it back. Maybe down the road I’ll get more into it, but right now, I’m just a baseball player. I come to the ballpark, try to get better each and every day and help the team win.”

One of Trout’s few endorsement deals is for BodyArmor sports drink. This spot on YouTube has 250,000 views, which certainly won’t set the world on fire. And as far as seeing Trout’s personality on display, well, you can see that he’s not exactly Peyton Manning when it comes to these things.

In an in-game interview during Tuesday night’s All-Star Game, Trout used the opportunity to talk about his passion for… following the weather.

In the midst of this debate about his “brand” we should stop and consider that Trout appears to be just fine with his Faried Fame. That doesn’t necessarily help Major League Baseball, but it shouldn’t be Trout’s responsibility to sell himself out to 9,000 different commercial enterprises if he doesn’t want to. It should be up to MLB to make sure their stars are more marketable.

But if the reaction from MLB commissioner Rob Manfred is to be believed, it’s Trout’s fault instead of baseball’s that he’s not more recognizable. Via USA Today:

“But he has to make a decision to engage. It takes time and effort.”

This is exactly the wrong approach to take. It couldn’t be more stubborn and obtuse.

If MLB had the kind of operation that could turn their athletes into household names, then why haven’t they done it with other stars? What about Bryce Harper or Clayton Kershaw or Kris Bryant or Mookie Betts? What about Giancarlo Stanton or Aaron Judge or Joey Votto? Votto is one of the best players in his era and EVEN PEOPLE WHO WORK FOR TEAMS IN HIS OWN DIVISION DON’T RECOGNIZE HIM.

MLB has a once-in-a-lifetime athlete in Mike Trout. If the league can’t find a way to make him more marketable, then it is nothing but a damning condemnation for MLB’s freefall in the larger American sporting ecosystem.

Instead of blaming Trout and throwing their hands to the sky, why doesn’t MLB use Trout’s humility and focus on his game as positives? Why not emphasize his down-to-earth nature, humble personality, and everyday relatability?

How many people in our society cry out for an athlete to look up to as a role model like it was the good old days instead of the constant cycle of controversy that we see today? Exploit that idealism! Use that for good! Tell the world that he’s the human embodiment of apple pie and the man who can truly Make America Great Again.

Do something... anything…. to try to help this guy get over. You have one of the best ever MLB players calling into The Weather Channel in his downtime, how could someone not fall in love with that?

There are an unlimited number of ways MLB can help promote Mike Trout. Put more Angels games on in primetime throughout the season, make your highlights more available throughout social media, find a way to showcase his statistical marvels versus the best who have ever played the game. It’s up to baseball to engage and take the time and effort to grow their stars and their sport. Before it’s too late.