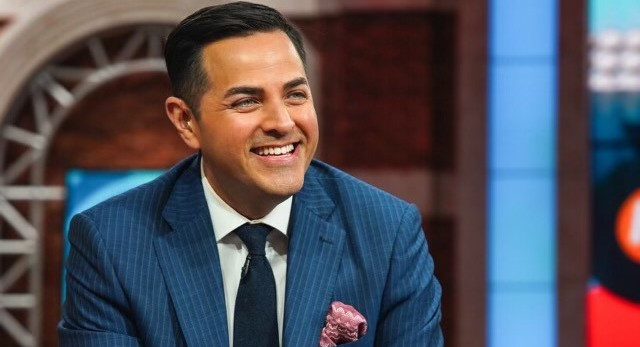 The World Series is always a big stage for MLB Network, and this particular Atlanta Braves-Houston Astros World Series (Game 1 starts at 8 p.m. ET Tuesday night on Fox) is one that’s especially interesting for MLBN/NHL Network host Robert Flores. Flores, who moved to MLBN/NHLN in 2016 after 10-plus years at ESPN and is currently the regular host of their MLB Central morning show (since 2018; it saw a 20 percent viewership rise over 2019 this year), grew up in Houston and went to the University of Houston, and he still has plenty of connections in the city. He’ll be on site in both Houston and Atlanta for MLB Network coverage this week. Flores spoke to AA about that on Monday, and said the Astros’ recent run (a World Series title in 2017, a World Series appearance in 2019, and now this year’s trip back to the Series) has worked out well for him given his connections to the city.

“Since 2017, it’s been really kind of a regular occurrence. And during this playoff run, it serves as almost a kind of business and personal trip for me, because I still have so much family there, uncles, my brother lives there and is a high school basketball coach there. So it’s been great, because I get a chance to cover a huge event and be there in a great atmosphere with lots of great games, but also catch up with family and friends.”

Flores said he grew up as a fan of the Astros, but he now takes a more neutral approach given his media role.

“If you’re in sports media, more than likely you were a fan of some team or a handful of players, and that’s no different for me. I grew up in Houston, I was born and raised there, I was definitely an Astros’ fan. But I’ve lived in the Northeast since 2005, and I also take pride that I try to be as professional as possible; I would never do anything to harm that reputation or do anything that would look unseemly or unprofessional.”

“I think every media member grew up rooting for a particular team, otherwise they wouldn’t be in this business, but once you’re working, it’s like anything else; you lock in and understand that you have a job to do. Once you’re off work or the shift is over, you can appreciate the things that have gone on as a fan, if that’s what you choose.”

But he said the Astros’ recent run is remarkable, and he’s noticed how much they’ve come to dominate Houston’s sports scene.

“When I’ve gone back there, in addition to going back there to work over the past handful of years, pre-pandemic I would make at least a yearly trip down there, and I was struck by—and this is purely anecdotal—I was struck by how many people were walking around in Astros’ gear, hats, t-shirts, whatever, and the lack of hats and t-shirts for the Rockets and Texans. ”

“I think that Houston is definitely a baseball town, and that wasn’t always the case. But the Astros are by far the most successful franchise in that city, especially when you consider what the Texans and Rockets are going through right now. These things change, sometimes these things are cyclical, but right now, Houston’s a baseball city.”

Flores, who was born in 1970, said that’s a long ways from the city’s fandom landscape while he was growing up.

“In the early to mid-70s, the Astros were kind of a middle-of-the pack type team. They started making noise in ’79 and ’80. That 1980 team was just a few outs away from going to the World Series before losing to the Phillies, and then there was ’86 and that epic [NLCS] series with the New York Mets. But in between there, you had the ‘Luv Ya Blue‘ Houston Oilers and then the Houston Rockets making a run in 1986, and their title teams in ’94 and ’95. That’s why I say it’s cyclical in a lot of ways; the success of a particular team dictates the fandoms within that city.”

Part of what’s interesting with this particular Astros’ team is that while the 2017 and 2019 World Series appearances came under manager A.J. Hinch and general manager Jeff Luhnow, this team has Dusty Baker and James Click in those roles respectively (thanks to Hinch and Luhnow being fired after the 2019 season for their reported roles in the 2017 sign-stealing saga). Baker is particularly notable as the second-oldest manager in the World Series, and the one with the second-longest gap behind World Series appearances. Flores said he’s heard remarkable things from Astros’ players about what Baker has done for that clubhouse.

“He has brought stability. He’s an authority figure, no doubt, but I’ve heard a couple of players, including when I was in Boston last week with MLB Central, a couple of the players told me ‘He’s been exactly what we need,’ in light of everything that went down a couple of years ago and the punishment that was brought down. Dusty has seen everything there is to see in this game. Also, the players love him; it’s almost like in the sense of like a grandfatherly type vibe between him and his players. They love him and they love playing for him, and I know they would love to win for him as well.”

As for the Braves, Flores thinks their starting pitching will be a notable part of this series.

“I think with their starting rotation, they have an advantage over the Astros. Yes, Framber Valdez and Luis Garcia were excellent in their most recent starts [for Houston], but clearly the Astros without Lance McCullers in their rotation, that could be a problem. They were able to overcome it in the ALCS. Can they overcome it in the World Series? I don’t know. But I do know that Charlie Morton will start in Game 1 for the Braves, and Astros’ fans know him very well. He has pitched on the biggest stages and done well.”

“I think it’s going to be very interesting how this starting rotation matches up against the Astros’ lineup. Clearly in today’s game, starting pitchers don’t throw nine innings any more, starting pitchers don’t even throw seven innings more often than not. So it’s going to be a battle of the bullpen, and I’m interested to see that; the Astros’ bullpen performed rather well in the last round, as did the Braves’.”

On the specifics of what MLB Network will be doing this week, their on-site coverage from both Houston and Atlanta will start at 3 p.m. ET on game days. It will feature High Heat, MLB Now, Intentional Talk, and MLB Tonight. More than 20 different personalities, including Flores, will contribute to the coverage through a potential Game 7, with that coverage airing both on the network and their social media channels. Flores said he’s excited to see what they can bring to the World Series this year, and he feels they always bring their best game for the World Series.

“We’re going to be there wall-to-wall, on site, all of our shows emanating there, High Heat, MLB Tonight. Here’s what is so good about our network and how this comes into play this week; we’ve got guys who have played in the World Series on our set, we’ve got guys that have won the World Series that will be there. I think that kind of insight is unmatched, and it’s a great thing for the viewer.”

“Our guys can really take you inside of what the guys are thinking, what the managers are thinking. I think it’s one of the unique things that we bring, and I think this is our best week. Throughout the year, I think this is one of our best weeks at the network, because this is where we bring out the big guns. Every team has their superstars, and superstars shine in the postseason. That goes the same for us.”

As for Flores himself, while it’s now more than five years since his move from ESPN to MLBN and NHLN, that’s still a notable shift. He said he’s really enjoyed his work with those league networks, though.

” I always tell people that this has been the most rewarding five-plus years of my career. I feel like I’ve had real ownership, real stability when it comes to my work and the things I contribute on. I’m very proud to be part of MLB Central, our morning show that just wrapped up last Friday. There’s a real collaborative spirit working on that show that I enjoy. We have so many talented people not just in front of the camera, but behind the camera. I’m really excited to see what happens in the coming years, specifically with our morning show. I think we’re in a really good spot, and I’m proud to be a part of it, and I can’t wait to see what’s next.”

And Flores is excited to see what this particular World Series, featuring the most southern matchup in World Series history, will bring.

“I jokingly called it during MLB Central that this was going to be the most southern, country-fried World Series in history. And I love it, and I think it’s great. Two southern cities battling for the World Series, I think it’s awesome.”