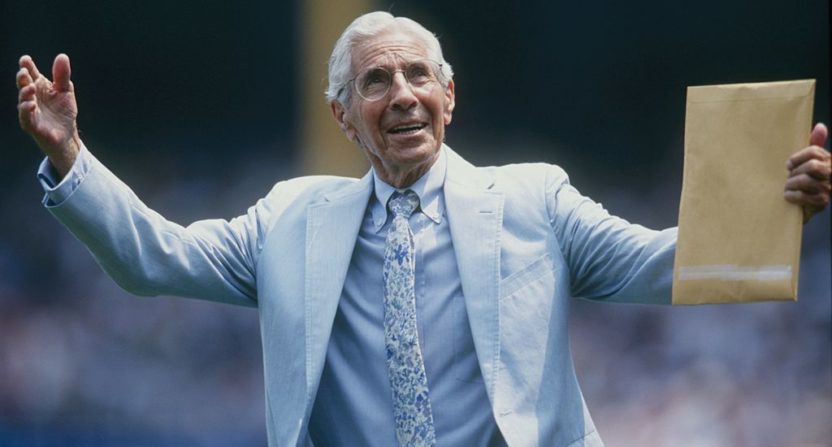 Prior to a game at Yankee Stadium, a mouse was on the loose in the home television booth. Like lightning, small planes, and heavy traffic on the George Washington Bridge, Phil Rizzuto feared little critters.

But instead of bolting for home which he did casually and regularly, the eccentric broadcaster wrapped twine around the cuffs of his pants. And just in case, he locked his feet under his crossed legs against the seat of his chair. When press-rowers gawked and chuckled, he screeched, “You huckleberries! That mouse won’t run up my leg!”

Such was the silliness of 40 entertaining summers with Philip Francis Rizzuto.

But it took years for Scooter to earn the necessary capital to be his unique self.

When he was first hired in 1957 after a Hall of Fame career as a Yankee shortstop, Rizzuto faced an unpleasant baptism under play by play icons Mel Allen and Red Barber. “They resented me as a former player. I was one of the early ones to invade their domain,” Rizzuto said. Howard Cosell didn’t encourage him either. “You’ll never last,” he told Phil. “You look like George Burns and sound like Groucho Marx.”

During his first spring, Allen asked Rizzuto to cover a rain delay alone so that he and Barber can break for hotdogs. “They force fed me,” Scooter said. “They made me fill that dead air unassisted – as they watched from the corner of the booth.”

“Fouled back,” Phil would say and Allen would pounce in his ear whisperingly, “Say where the ball landed.” But it was Barber who gave him no room for error, hitting the newcomer with on air pop-quizzes, no holds barred, arcane facts included. “He would ask me what Michigan’s official rock was. Now, how was I supposed to answer that?” Rizzuto reminisced resentfully.

Assigned many play-by-play innings immediately because Barber didn’t do road games, Phil quickly learned to connect the baseball dots and not be wordy. He recognized the importance of delivering subject and verb. Longtime baseball broadcaster Howard Kellman calls it “active tense;” play-by-play portrayed rhythmically; action and reaction (“Smith winds… He pitches…. Jones swings…He grounds it on the right side….”)

According to Allen, Rizzuto wanted to establish a signature phrase. Barber was known for the occasional, ‘Oh doctor!’ and Allen for the often ‘How ‘bout that!’ So Phil’s ‘Holy Cow’ stuck indelibly. On October 1, 1961: “Fast Ball. Hit deep to right. This could be it. Holy Cow! Number 61 for Roger Maris!”

Scooter brought something to the airwaves that few do in today’s commoditized world of sportscasting; a relatable heart, an openness and the guy next door who wore his personality on his sleeve. “Big Ted Kluszewski looks at umpire Larry Napp. If he looked at me like that, I would run right out of the ballpark.”

Rizzuto broke rigid rules innocently; mingling play-by-play with sighs, birthday greetings, his favorite pasta dishes and extraneous reflections. It was this neighborly warmth that scented baseball summers with laughs and self-deprecating humor; arguably making him the most popular Yankees’ announcer ever, loved even more than Mel Allen.

On June 4th 1972, the Yankees, hovering .500, played a doubleheader in Chicago. As the story goes, when White Sox owner John Allyn noted that enigmatic slugger Richie (“Call me Dick”) Allen wasn’t in the lineup for the second game, he called the dugout where manager Chuck Tanner spewed an emollient off-the-cuff prophecy. “I’ll send him in to pinch-hit with a couple men on base so he can hit a homer and win the game for us.”

As fate had it, Chicago had two men on base in the ninth inning and trailed 4-2. Summoned from the clubhouse, Allen quickly changed his chili stained shirt and rushed to the plate to face ace reliever Sparky Lyle whom Ralph Houk, the Yanks’ skipper, brought in to pitch.

On radio, Rizzuto was right on it. “Lyle against Richie Allen, what a battle! Two top men facing one another.” The din was deafening. “The pitch (the crowd erupts thunderously) …Ohhh…he creamed it!… Holy Cow, I don’t believe it… I don’t believe it!…..Richie Allen pinch hits a 3 run homer…..(a long lamenting sigh) Awe!… The White Sox beat the Yankees, 5-4…….. I know it happened because I hear that scoreboard going off (fireworks)…” The inimitable ‘awe’ was priceless from what I remember 45 years later.

At that point, Phil left the park faster than Allen’s blast, leaving colleague Frank Messer all alone to wrap up the broadcast.

One man’s trash that late Sunday afternoon was another’s treasure. In the home booth, the flamboyant Harry Caray stamped Allen’s dramatic homer with a raucous ‘Holy Cow’ that pumped a growing Sox nation! “I know I was the first to say ‘Holy Cow’ because I used it when Rizzuto played,” Caray insisted. Reportedly, years earlier, he even asked Mel Allen to tell Rizzuto to stop using it on Yankees’ broadcasts.

Scooter’s 1960s boothmate Jerry Coleman began a sentence, “We Californians….” Out of nowhere, Rizzuto stopped him, “Hey Jerry, is it ‘We Californians’ or ‘Us Californians?’” After a miscast grammatical debate which sounded more like Abbott and Costello’s “Who’s on First,” the two men got back to the game – but not for long. Knowing that Coleman was a decorated Navy pilot, Rizzuto wandered off again, “Hey Jerry, I don’t know how I ended up in the Navy. I get nervous on the ferry!”

During those years, Joe Garagiola asked him why the fascination with cannolis. “A day without a cannoli Joe is a day without sunshine.” Rizzuto and Bill White engaged jovially in the 70s and 80s. “Hey, White,” Scooter bellowed, “The hotel room here in Seattle is circular. If Cora was here, I’d be chasing her around the room all night.” As Stan Isaacs of Newsday wrote, “Rizzuto’s ebullience and White’s sly needling combined for a good team.” Back and forth they went one night when a muddled Rizzuto introduced himself, “Hi, this is Phil White.”

When White asked Phil about the significance of the letters that Scooter scribbles on his scorecard, WW, Phil dismissed it nonchalantly. “Oh yeah, White. WW means I wasn’t watching.” White chuckles. But Red Barber didn’t find Scooter’s special treatment funny. In the The Broadcasters, he writes tendentiously, “He (Rizzuto) has a sparkling charm. No matter the jam he gets in, he gets out of it by assuming a childlike innocence.”

Then there was the banter with Fran Healy. “Here’s Scooter, back from the men’s room.” Rizzuto: “Healy, you Huckleberry, you shouldn’t say that. Tell them that I went to see Bill Veeck (White Sox president).” The late Vic Ziegel, portrayed the two in New York Magazine, “The Rizzuto-Healy exchanges, four years of nonsense with a few pitches thrown in, were kind of a golden era of chatter.”

Funny how things turned out. Rizzuto out survived his two unwelcoming colleagues by three decades. The Yankees fired Allen in 1964, finding him officious and irrepressibly garrulous. Red was let go in 1966 after wearing out his welcome with his three colleagues; all ex-players; Garagiola, Coleman and Rizzuto.

By the end of Scooter’s career in 1996, the Yankees had separate crews covering television, cable, and radio. Fans needed a scorecard to keep up with the team’s number of announcers. Rizzuto told someone, “These huckleberries, I now get spiked on my way into the booth.”

When all was said and done, Rizzuto’s unpretentiousness, idiosyncrasies and human foibles demonstrated to the sternest of listeners that frailties are pervasive, inescapable and acceptable.

Phil would have been 100 this September 25th. He passed at age 89 in 2007. Thanks for a hundred plus memories and a million smiles!

David J. Halberstam (halby@halbygroup.com) is the author of Sports on New York Radio: A Play-by-Play History and The Fundamentals of Sports Media and Sponsorship Sales.