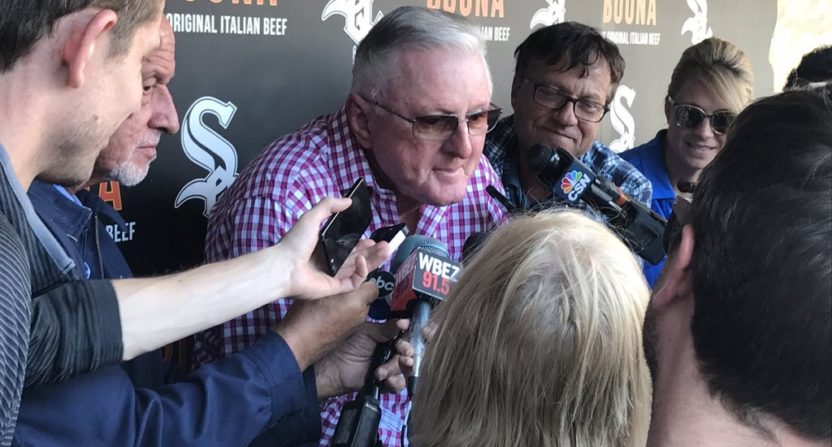 There might not be a more divisive broadcaster than Ken “Hawk: Harrelson, whose blatant, unabashed homerism is probably unmatched in baseball, and perhaps in any sport.

Harrelson has served his current stint in the broadcast booth with the White Sox since 1990, but he first started broadcasting back in 1975 with the Boston Red Sox. He then bounced around, including an earlier run with Chicago’s South Side team, before sliding from the broadcast booth to the general manager’s office for one tumultuous season. (He fired manager Tony La Russa and assistant GM Dave Dombrowski, among other mishaps.)

Harrelson’s style can be grating to listen to as a neutral or opposition fan, but it’s impossible to deny his passion for the team he covers, and at least he’s transparent in his motivations. There’s something comforting about that; never do you have to wonder if Hawk is giving you the unbiased truth, because he’s not. As long as you have an understanding of his particular prism, you can glean a bit of the truth.

Hawk’s schedule will be reduced a bit:

The #WhiteSox today announced that Ken “Hawk” Harrelson will return for his 34th and final year in the broadcast booth in 2018. pic.twitter.com/lpL3PUgDSQ

Hawk will return for his final year in the broadcast booth in 2018 with a schedule of primarily Sunday home games.

Which paves the way for further appearances by Jason Benetti:

The #WhiteSox also announced a multiyear agreement with @jasonbenetti as the primary play-by-play voice with an expanded role in the booth. pic.twitter.com/IX2QMqDvoB

Benetti is very well-liked, and came in for praise in the 2016 Fangraphs ranking of the top broadcast booths:

• “Benetti has a good sense for when to defer to Stone and how to go to him for analysis that is advanced for his youth (and likely aided by having done other sports besides baseball as a PBP), and in one game you get more advanced/”sabermetric” analysis than you do out of Hawk for an entire year.”
• “I’ve only had a chance to hear new play-by-play man Jason Benetti a couple times but thus far I really like what I hear — engaged, not over-the-top, and interacts well with Stone.
• “[Benetti’s] engagement with the game and general curiosity has in turn brought out the better side of Steve Stone.”

No one nationally is going to miss the dead air, the shtick, and the palpable lack of chemistry with fellow Chicago broadcast legend Steve Stone, but that doesn’t render his status as a local legend irrelevant. Not being Vin Scully isn’t cause for outright criticism or celebration. Baseball is best with interesting characters, and Hawk Harrelson definitely qualifies.