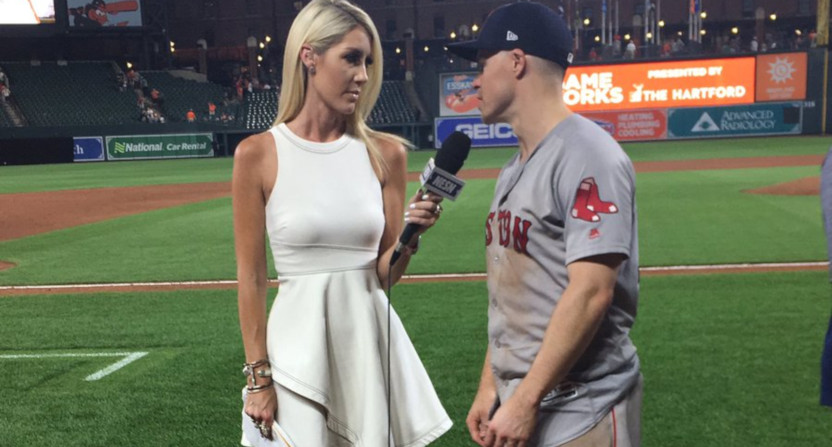 For the past six years, Guerin Austin has been a prominent figure at NESN, starting as the Bruins’ reporter there and then moving to work as the in-game reporter for Red Sox broadcasts. But as Chad Finn of The Boston Globe wrote Tuesday, Austin has exited the network following the expiration of her contract:

NESN is parting ways with Guerin Austin, who spent six years at the network and is best known for her work as the Red Sox in-game reporter.

“Working for the Bruins and the Red Sox was a dream come true and I am beyond grateful for the opportunity,” said Austin in a text. “The interaction I had with the fans is what made this experience truly memorable.

“I appreciate the players, the coaching staff and all of their families who gave me access and time so I could share their stories with the viewers. I’m really excited about the next chapter, but I’ll miss seeing everyone at Fenway.”

“We are grateful for Guerin’s contributions to the broadcast during her time at NESN,” the spokesperson said in a statement.

How it started:
How it ended:
How it will be remembered:

The past 6 years have been amazing. Thank you.
So excited for the next chapter….. pic.twitter.com/1ugSDV5Oj6

Jahmai Webster, who had occasionally filled in for Austin from 2017-20, is expected to replace her on a full-time basis this year, as per Finn. He tweeted about that Tuesday:

And because 280 characters is never enough! This is the best crew in baseball behind the scenes too. I've learned so much from the men and women who make us look so good (mainly cleaning up my mistakes) lol Looking forward to this season and beyond. LFG!!!!!!

There are other changes going on at NESN too, including long-time Red Sox analyst Steve Lyons (most recently a part of their studio group) leaving. And the network is not alone there; we’ve seen many regional sports networks (particularly NBC’s) reducing their focus on in-game reporting, and there have been several discussions about downsizing, debt loads, and more. And there are plenty of long-time in-game reporters from RSNs leaving, including Alana Rizzo with the Dodgers/SportsNet LA. We’ve also seen other RSNs, especially MASN, cut down their pre-game and post-game coverage of the teams they broadcast. So it’s not unprecedented to see a RSN moving on from some prominent and established voices at this time. But it’s still notable to see a popular and prominent reporter like Austin exit after an expired contract.

[The Boston Globe; photo via Jody Ryan on Twitter]