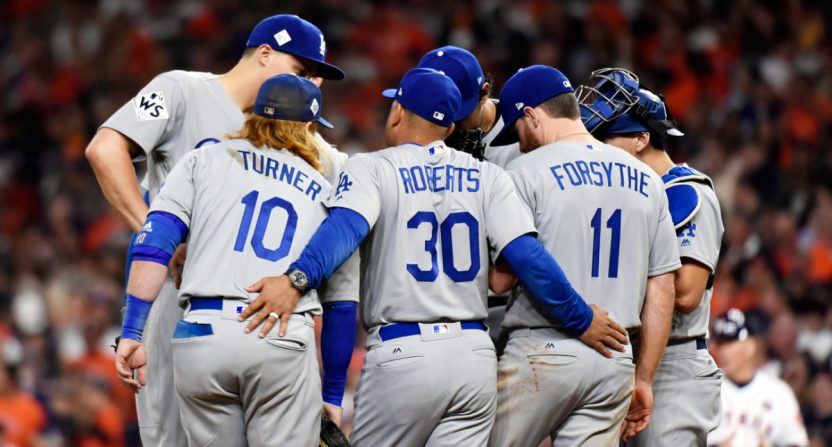 San Francisco Giants and Los Angeles Dodgers will once again meet for the final game of the series. These divisional rivals sure don’t like each other, and every single one of these games has a postseason feel that makes it must-watch television. Not to mention it’s often hard to make a Dodgers vs Giants prediction. With that in mind, let’s talk about this game and our best MLB picks today.

This game will feature a nice pitching duel, with the visitors trusting Alex Cobb and the home side sending Clayton Kershaw to the mound. Cobb is 3-4 with a 4.09 ERA for the season, whereas Kershaw boasts a 7-2 record with a 2.13 ERA. As per every Dodgers prediction, the southpaw has been one of the most reliable and MLB best bets throughout the year.

Nonetheless, the Giants have hit Kershaw hard historically. They have a combined .299 batting average and .905 OPS in 167 at-bats against the future Hall of Fame. In contrast, Cobb has limited current Dodgers to just .146 hitting and .392 OPS, albeit in a more limited sample size.

The Giants know they need to finish the season strong and start putting together some runs if they want to be buyers before the trade deadline and have a shot at making the playoffs. They will approach this game as a win-or-go-home scenario, whereas the Dodgers could relax as they’re comfortably sitting at the top of the National League.

Making a Dodgers vs Giants prediction could get tricky given these teams’ history. But considering how the series has developed and how well Cobb has pitched against them and the Giants odds, taking a flier on them should be worth the risk in this situation.

The Dodgers have had the upper hand this season and are riding the best record in the National League, while the Giants have been far from the team that won a franchise-best 104 games last season. That’s why the Giants’ odds of making the postseason aren’t what one expected before the start of the campaign.

Dave Roberts’ team boasts the best ERA in all the Majors and has been one of MLB best bets this season, and LA Dodgers odds show they’re the team to beat en route to the World Series. On the other hand, the Giants have struggled to stay healthy for most of the year, and their starting rotation suffered big blows in the offseason.

Also, If you’re looking to get some more sports betting picks and best bets and get the best value, don’t hesitate to visit our site to get our MLB picks today and free predictions from our team of experts.

This type of bet is just like with every other sport. For moneyline bets, all you need to do is place a wager on the team you believe it’s going to win the game. In this case, the LA Dodgers odds make it clear that they should be favored, while the Giants odds make them underdogs. That’s why our Dodgers vs Giants prediction would give you $140 for every $100 you place on the Giants.

It’s also worth noting that baseball games can never end in a tie, so teams will continue playing extra innings until the winner is settled. Also, moneyline bets for postponed games will push, but delayed games may still count, even if they have to finish the game next day due to inclement weather.

Just like in every other sport, betting on totals allows you to ignore the winner of loser of the game. Instead, you’ll focus on how many runs they will/won’t score in the game according to the projected total set by oddsmakers. For this type of bet, you’ll focus on both teams rather than just one or the other.

Betting on the runline is similar to making point-spread bets in basketball and football. Basically, oddsmakers take 1.5 runs from the favorite and give them to the underdog. In this case, LA Dodgers odds show they’re favored, meaning you’ll need to win by at least 2 runs if you bet them on the runline.

Giants odds, on the other hand, show they could win the game or lose by one run tops, thus the +1.5. You could take the runline instead of the moneyline on our Dodgers vs Giants prediction, although the odds would be significantly lower.

While runlines may no be MLB best bets given how difficult they’re to cash in, they have higher odds for the favorites when compared to moneylines. Also, they’re safer bets when you want to bet on the underdog, as you get an extra run and a half for insurance.

Just like in any other sports, baseball also allows you to bet on players’ performances. You can bet on whether a player will record a hit or how many hits he’ll get. You can also try and guess whether a stating pitcher will go over or under a projected number of strikeouts, whether there will be a run in the first inning, or even whether a team will score more or less runs than its projected total.

Needless to say, props bets often have better odds, but that also means they’re more difficult to hit given how unpredictable player performances could be.