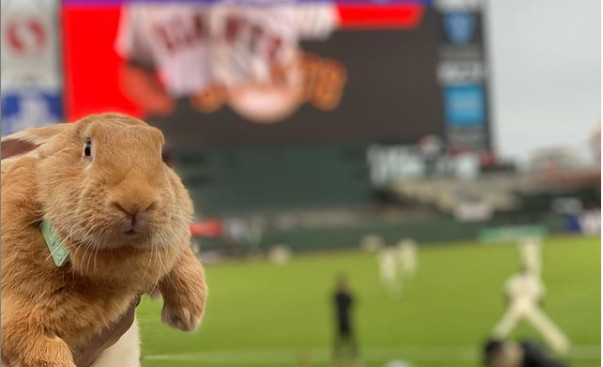 There have been a lot of cases during sports events of animals on the field and broadcasts reacting to them, but the animal discussion during Thursday’s Miami Marlins-San Francisco Giants game was notable for its differences. For one, this involved a large rabbit, and for two, that rabbit was not an unexpected visitor who made his way to the field, but rather a permitted guest in the stands. It was therapy rabbit Alex, there with his humans. Here’s how the NBC Sports Bay Area broadcast of Mike Krukow and Duane Kuiper initially called it:

What do you call a rabbit that sneaks into @OracleParkSF?

“You know what they do after Easter? They go to ballgames! And we just found that out!” “Yep. They’ve got a rabbit.” “And it’s not a small one, either. That’s a big fella.” “Let him run.” “Uh oh? Food for the rabbit? Yep! Look at the ears! Snacks! Snacks for the humans, or snacks for the rabbit?” “Well, you’ve got to be careful with snacks for the rabbit, or else you’re going to see smart pills on your leg.”

And here’s Janie McCauley of The Associated Press interviewing rabbit owner Kei Kato, which features Kato talking about the many events Alex has been to, including NASCAR, kayaking, and snow tubing at Lake Tahoe:

Career-first: just interviewed a sweet bunny, 4 1/2-month-old therapy bunny Alex, and he gave me a kiss, too. It belongs to Kei Kato, who lost her restaurant during COVID. pic.twitter.com/mcc4i60x8K

Here’s more on this from McCauley’s story:

Alex has been an important, beloved companion for the 32-year-old Kato, who lost her brewery restaurant called “K-OZ” during the pandemic and now runs a small café in the U.S. Immigration office. The bunny helps her deal with the anxiety and stress of no longer having her main source of income and fulfillment.

“I lost it all because of COVID, so I’ve been really stressed a lot,” Keto said. “We support local. I was a local. He’s well trained, too.”

Giants CEO Larry Baer was thrilled to host Alex and his owners.

“Love this Therapy Bunny …” Baer said. “We could all use a therapy bunny right about now!”

…The bunny has attended a NASCAR event and is even an ambassador for Lions Clubs International. Alex helped hand out 400 Easter eggs to children, brings smiles and loves to play, even giving kisses on command. He entertains the masses at farmers’ markets, has been tubing at Lake Tahoe and kayaking.

And (San Jose) Mercury News columnist Dieter Kurtenbach relayed Alex’s Instagram, with some remarkable photos (including the one at the top of this post):

So that’s a fun occurrence out of the normal on a Giants’ broadcast.