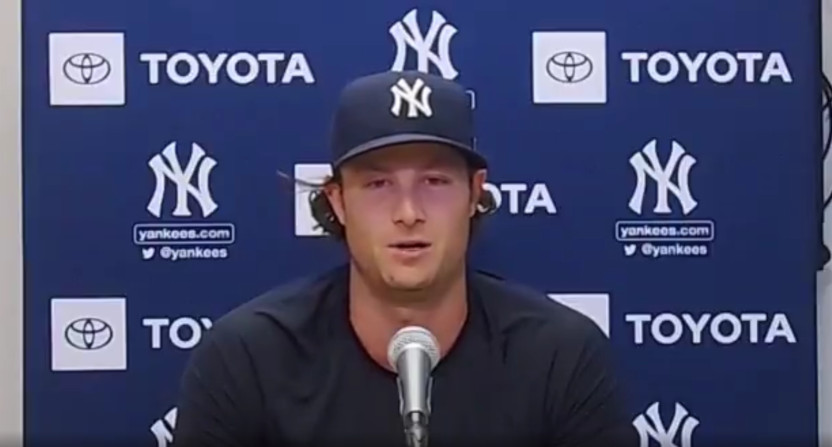 The baseball world is currently facing a lot of discussions about pitchers’ use of foreign substances to improve spin rate and a planned MLB crackdown on that. One substance at the center of the current discussion is SpiderTack, a substance developed by weightlifter Mike Caruso for improved grip on heavy Atlas stones, which many have argued produces more spin than anything else. SpiderTack co-founder James Deffinbaugh told Scott MacArthur and Mike Zigomanis of Sportsnet The Fan 590 in Toronto Tuesday that he’s recognized MLB pitchers’ names amongst the list of people ordering from them. And when Ken Davidoff of The New York Post asked New York Yankees’ pitcher Gerrit Cole (often discussed amidst this spin rate conversation) Tuesday specifically if he’d ever used SpiderTack, Cole’s evasive response drew major attention and criticism. Here’s video of that from Davidoff’s Post colleague, Matthew Roberson:

here's gerrit cole's response when asked point blank if he has ever used spider tack, one of the sticky substances baseball is looking to crack down on pic.twitter.com/rKFOksIDoW

“I don’t…I don’t know, I don’t know if, I don’t quite know how to answer that, to be honest. I mean, there are customs and practices that have been passed down from older players to younger players, from the last generation of players to this generation of players. And, you know, I think there are some things that are certainly out of bounds in that regard. And I’ve stood pretty firm in terms of that, in terms of the communication between our peers and what not. And again, like I’ve mentioned earlier, this is important to a lot of people that love the game, including the players in this room, including fans, including teams. If MLB wants to, you know, legislate some more stuff, that’s a conversation that we can have. Because, ultimately, we should all be pulling in the same direction on this.”

That’s a long way from a simple “yes” or “no” from Cole on if he had ever used SpiderTack, and the equivocation and dancing there took a lot of criticism from a lot of people. But it’s also possible to see where he’s coming from, and to understand why he chose this particular approach to responding to this question.

First off, while MLB has long had some levels of anti-foreign substance regulations on the books, they’ve never fully enforced those. Doctoring baseballs has been prevalent throughout baseball history, and the emphasis to umpires has generally been that the anti-doctoring rules are there to provide an enforcement framework when someone does something too blatantly, not that they’re to be enforced to the letter of the rule in all circumstances. (There’s some good discussion on this in former MLB umpire Ron Luciano’s books, The Umpire Strikes Back and Strike Two, as well as other coverage of MLB umpiring through the years.)

Many pitchers have long been known for getting away with whatever doctoring they could, including some of baseball’s most famous. 1991 Baseball Hall of Fame inductee Gaylord Perry even titled his 1974 autobiography (released while he was still playing) Me and the Spitter: An Autobiographical Confession, and frankly discussed his various methods of doctoring baseballs there, including spit, Vaseline, and more. So Cole’s comments about “customs and practices that have been passed down” are absolutely true.

MLB has never consistently enforced the letter of the law on doctored baseballs, or really indicated that they’ve had much interest in doing so. And so of course older players are going to give younger players some tips and tricks on what they can get away with, and the whole thing is going to continue. And it doesn’t seem too fair to suddenly decide “The other substances were fine, but this one’s too far, so we’re going to specifically vilify everyone who’s used it while ignoring much of the rest of the foreign substance use.” Of course, MLB’s discipline plans generally are forward-looking rather than back-looking, but there’s a different factor to consider with the court of public opinion.

And that’s something that’s very obvious from how things went down with the MLB steroid scandal of the late 1990s and early 2000s. Some of the products players were using then were both legal and not specifically banned by MLB; some of them were not. For a long time, MLB didn’t care about either; home run back-and-forth chases were great for them. When they did start cracking down under public pressure, most of their plans were about restricting more substances and punishing future use. Some past use tales did wind up in the Mitchell Report, but that was far from comprehensive. So for many players who did use banned substances, as long as that never came to light, silence was by far the best option.

Denial when you’re later proven wrong is often worse than silence, though, and that’s something also illustrated by the steroid scandal. One of the prevailing public images from that is Rafael Palmeiro’s finger wag about never using steroids in 2005 Senate testimony, which drew even more attention later after he failed a steroid test and was suspended for 10 days. Palmeiro still disputes intentionally using steroids, and claims that positive result came from a contaminated B12 injection, but he’s largely remembered as a face of that scandal for “lying,” and then getting caught. Meanwhile, many other players from that era who did use steroids either never had their names come up publicly, or didn’t have as much backlash attach to them even after positive tests.

So, if there’s a chance that Cole had used SpiderTack (and it’s also perhaps possible for him to not be entirely sure which specific substances he’s used), just telling the media “Yes, I’ve used that” feels like a bad move. That’s an admission without evidence, and there may never be any evidence; there may never be any discipline, but that would get him definitively linked to this scandal. If there’s a chance he has used it, though, telling the media “No, I haven’t used that” also feels like a bad move in case that’s later definitively refuted. So this verbal filibuster is more like the press conference equivalent of taking the Fifth Amendment’s provisions against self-incrimination, and there’s some logic to that, even if it leads to some bad immediate headlines for Cole.

Cole’s awkward press conference here illustrates some problems with this crackdown, though. Yes, there’s some reason for MLB to crack down; offense is historically low this season, and while some of that may be about changes to the ball, some of it’s possibly about expanded foreign substance use as part of a focus on spin rate. The current offensive totals seem bad for the league, and if promising a foreign substance crackdown can improve them, that may have some merit. But that’s a dramatic sea change from MLB’s previous approach, and it seems pretty hard for the league to do that fairly and consistently. And the media in particular going after individual players over particular substances that had no official “worse” rating is not ideal, as The Athletic’s Eno Sarris tweeted:

1) It makes sense to police the crazier tacky substances to maybe reduce spin on some of the crazier breaking balls & perhaps reduce strikeout rate.
2) It doesn’t make sense to vilify players that never saw this rule enforced broadly & never told that some substances were “worse”

And while Cole’s press conference here may have looked a little silly, it may wind up working out for him in the end. If no definitive proof ever emerges that he used SpiderTack (which, again, was not more prohibited than anything else prohibited, with most prohibited substance use being overlooked altogether), then the worst anyone can say about him here is “He didn’t outright deny that usage.” If he’d admitted to using this specific substance, that would make him a lightning rod for its critics, even if he was likely far from the only MLB pitcher to do so. And if he’d said “I never used that,” and then proof emerged that he was lying, that might be the worst possible outcome. So while Cole may be in the spotlight for now for this evasion, an alternative approach may not have been better.