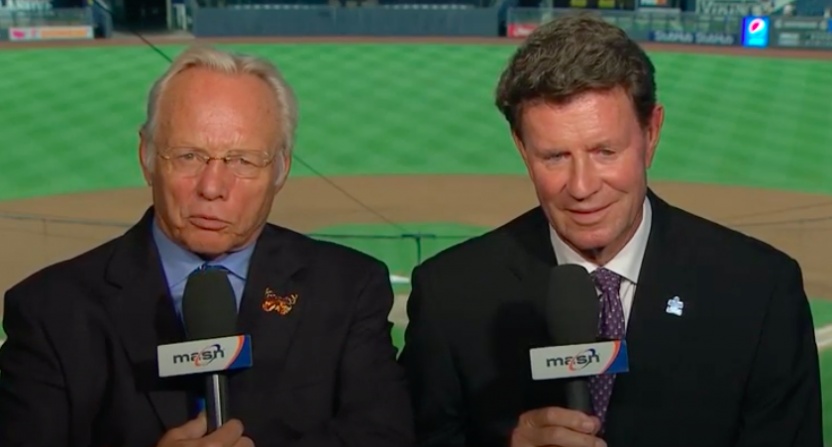 On Saturday, MASN reversed course on an announcement earlier in the week that they would be broadcasting exhibition games between the Washington Nationals and Baltimore Orioles in the week ahead. At the time, MASN cited “a lack of revenue during the coronavirus pandemic and the health risks associated with covering a game as reasons to not broadcast the exhibitions.” The trepidations about broadcasting this week may or may not be related to the news reported by The Athletic’s Dan Connolly that MASN is completely revamping their long-running Baltimore Orioles broadcasting team for the 60-game 2020 season due to “high-risk factors.”

According to a source, MASN is completely revamping its broadcast lineup now. Being told Jim Palmer, Gary Thorne, Rick Dempsey and Tom Davis will not be part of any 2020 broadcasts. Ben McDonald and Mike Bordick will be main analysts. Scott Garceau & Kevin Brown play-by-play.

Connolly expanded on the alleged change in broadcasting strategy for 2020 by noting that this is not a permanent change but one made out of caution due to the Covid-19 pandemic and related to MLB broadcasting plans overall. He also noted that many of those who will not be calling games may still appear from time to time from other locations via Zoom.

More clarification on Orioles broadcast situation: No traveling to road games for TV or radio, which will be standard this year throughout MLB. Because of high-risk factors, the Orioles will not have broadcasters Thorne, Palmer, Dempsey, Davis or Hunter doing games.

Ben McDonald and Mike Bordick will be primary analysts splitting games but guys like Palmer, Dempsey, Roberts and Olson may appear in zoom segments during broadcasts

Palmer has been a mainstay of Baltimore Orioles broadcasts since 1984 when games were shown locally on WMAR. After a stint with Comcast SportsNet Mid-Atlantic (now NBC Sports Washington), he’s been the color commentator for Orioles games on MASN since 2007.

Palmer was joined in the booth in 2007 by Gary Thorne and they’ve been Baltimore’s main broadcasting duo since. Orioles fans will have to make do without hearing “Goodbye! Home run!” and “Mercy!” this season, two of Thorne’s signature phrases, not to mention knowing that it’s time for the broadcast to be over when Thorne says “Adieu” when the Orioles lose or “Adieu-Adieu” when they win.

Dempsey has served as the studio analyst for O’s Xtra on MASN since 2007, while also doing spot duty as a game analyst during occasional games.

Davis has served as the host of O’s Xtra on MASN since 2007 and was the host on previous networks going all the way back to 1984. No word yet on how these changes might impact his role as the host of MASN’s Mid Atlantic Sports Report and other programs.

Palmer, Thorne, and Dempsey are in their 70s, which makes them very high-risk for Covid-19. Per Connolly, some of all of the broadcasters may be able to rejoin the team in 2021, depending on where things stand by then. It’s expected that Palmer and Dempsey will continue to contribute via Zoom calls.

As for the voices that Orioles fans will hear, Kevin Brown, who also calls games for ESPN, called 50 games on the Orioles Radio Network last season. Meanwhile, Scott Garceau was already planning on doing some play-by-play for the Orioles this season as well as hosting pre- and post-game shows on the network. Both had been previously announced as members of the revised MASN broadcasting team back in February. Garceau is expected to be the main announcer with Brown and former Orioles’ High-A affiliate Frederick Keys announcer Geoff Arnold calling the rest.

Meanwhile, Mike Bordick is no stranger to Orioles fans as he’s been filling in on color commentary duties since 2012 while Ben McDonald has been stepping in when needed since 2018. Both have also done radio commentary for the Orioles over the years as well.