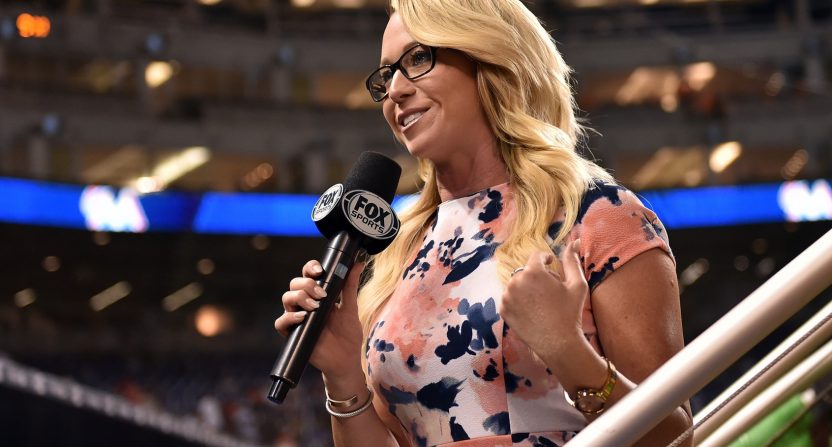 The Atlanta Braves and Fox Sports South made some news off the field on Wednesday when The Athletic reported that the team and network would not be bringing popular dugout reporter Kelsey Wingert back for the 2020 season.

According to The Athletic’s story, the decision was made in December, and while some within the Atlanta organization were notified, Wingert herself was not. Just a month ago, Braves president and CEO Derek Schiller told the Atlanta Journal-Constitution that the team was “really happy” with their broadcast team in 2020. However, maybe we didn’t read enough in between the lines, because Wingert wasn’t mentioned at all in the column by the AJC’s Tim Tucker.

“We as the organization were really happy with the broadcast team we had last year,” Braves President and CEO Derek Schiller said Thursday.

A year ago, the Braves made a major shakeup to their broadcast team, sending long-time analyst Joe Simpson to a primary role on radio, and replacing him in the booth with former Braves outfielder (and Atlanta-area native) Jeff Francoeur.

The Athletic reports that Wingert’s contract was renewed for two years in 2018, and was thought to expire in late-March.

Recent on-air appearances also seem to indicate this was a Braves-driven decision, since Wingert hosted coverage for both the Hawks and Hornets on Fox Sports South/Southeast this month.

The most likely replacement for Wingert in the dugout during Braves broadcasts is Paul Byrd, the former MLB pitcher who has previously worked in the role on FSS broadcasts. As for Wingert’s future, I’m sure she’ll land on her feet somewhere, be it as a studio host or reporter for a national or local network. And while I’m sure the Braves had their reasons for deciding to move on, she’s a popular figure within the fanbase and many of those fans have been rubbed the wrong way by Atlanta’s choice.

UPDATE: The Athletic is also reporting that former Cubs and Padres reporter Kelly Crull is expected to replace Wingert on Braves broadcasts this season.