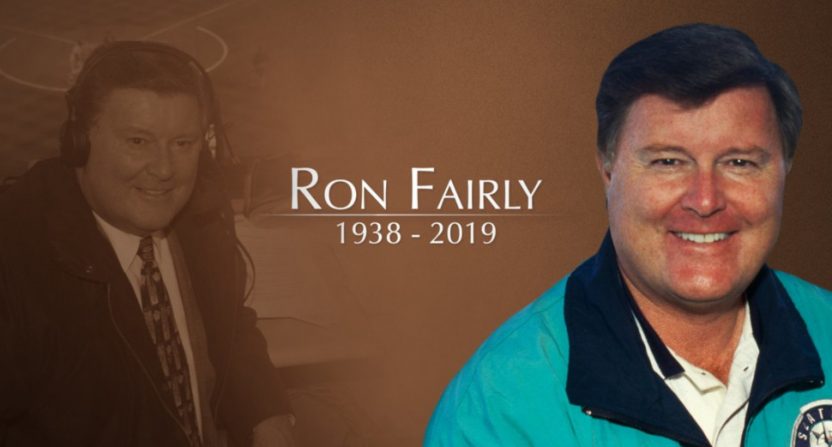 Ron Fairly has passed away. Fairly starred as a center fielder in college at USC (where he was later inducted into the school’s Hall of Fame), then played in MLB from 1958-1978 with the Los Angeles Dodgers, Montreal Expos, St. Louis Cardinals, Oakland Athletics, Toronto Blue Jays, and [then-California] Angels. After that, he went into broadcasting, calling games for the Angels, Giants and Mariners from 1979-2006. (He then came out of retirement for brief series returns with the Mariners in 2007, 2010, and 2011.) ESPN has more on the impact Fairly made:

Fairly played 21 years in the majors, winning three World Series titles with the Los Angeles Dodgers, with whom he played from 1958 to 1969. He also played with the Montreal Expos, St. Louis Cardinals, Oakland Athletics, Toronto Blue Jays and California Angels, compiling a .266 average with 215 home runs and 1,044 RBIs.

He was an All-Star with the Expos in 1973 and the Blue Jays in 1977 and is the only player to represent both Canadian major league teams in the All-Star Game. After retiring in 1978 as an Angel, he joined the team’s broadcast team the next season. He also broadcast San Francisco Giants games in 1987 before moving up the West Coast to Seattle in 1993.

“Ron was a key voice in our history,” Mariners president and CEO Kevin Mather said. “He joined our team at the start of an important era of Seattle baseball, beginning the same year as Lou Piniella and bringing over a decade of exciting baseball to our fans on TV and radio. Our thoughts are with his three sons: Mike, Steve and Patrick, and his grandchildren.”

…”Red was a true gentleman of the game and in life,” former Mariners radio producer Kevin Cremin said. “He spanned many eras of baseball and had great stories to tell about all of them. He will be missed.”

Tributes to Fairly poured in Wednesday:

The Mariners organization has lost one of its most beloved voices.

We send our thoughts and condolences to the family and loved ones of broadcaster and baseball lifer Ron Fairly. May he Rest In Peace. pic.twitter.com/3fQhckguMf

We send our condolences to the family and friends of broadcaster and baseball lifer Ron Fairly. May he Rest In Peace.#SFGiants pic.twitter.com/oFm0bMBO7k

The Angels join the @Mariners and the rest of the baseball community in mourning the loss of Ron Fairly.

Saddened to hear news about Ron Fairly. A gentleman in every sense of the word, Ron took the time to sit with me and reminisce about my dad, his time in the #Angels broadcast booth and baseball in general. There was never a bad day at the ballpark for him…I’ll miss him. #rip https://t.co/PcrYVdu4lJ

This was one of the best experiences I have ever had on the job. Rain delay in Cleveland, I walked Ron through a series of drawings in the press box of the old ballparks he played in and had him tell stories. He teared up when he talked about Duke Snider. https://t.co/Hkep6TfzAJ

Devastated to learn Ron Fairly has passed away. Ron was my broadcast partner with the Mariners, one of my all-time favorite Dodger players, and a wonderful person. Ron was 81. RIP Red. pic.twitter.com/4mKqlzkPX8

As we honor Ron Fairly today, we also remember his work outside the broadcast booth and off the field. Ron gave back to the community in many ways, including helping to deliver our DREAM Team message to local schools. We'll miss you, Red. pic.twitter.com/Ha5rRBjYXE

Really shocked and saddened to hear of the death of Ron Fairly. I first met him when I covered the Giants in the late 1980s and he was their color man. We both moved to Seattle around the same time. Spent countless enjoyable hours talking baseball with him. Great man. RIP, Red.

The two legendary announcers who worked with Ron Fairly — Hank Greenwald in SF and Dave Niehaus in Seattle — absolutely loved him. No one was better at filling the gaps of a baseball game with historical nuggets and hilarious anecdotes.

Today we remember you Red…

Everyone here at ROOT SPORTS sends our deepest condolences to his family and loved ones. Rest In Peace Ron Fairly. pic.twitter.com/wscRRMFYt4

RIP Ron Fairly. He left this for us: https://t.co/VXSYXBBbdK

#rip Ron Fairly. He was a hell of a ballplayer in his day and #sfgiants’ radio play-by-play voice when I started covering the team. I enjoyed many chats with Ron on airplanes, at the ballpark about baseball.