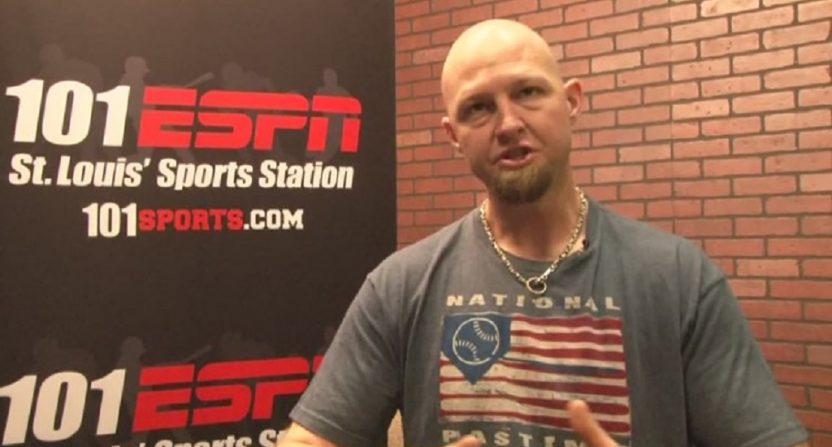 Former St. Louis Cardinals slugger Chris Duncan passed away at the age of 38 on Friday after battling brain cancer.

Chris Duncan, a 2006 #STLCards World Series champion, has passed away at the age of 38. Our thoughts are with his friends and family. pic.twitter.com/CBWbvGsayc

Jim Edmonds has not said a word on air since Dan McLaughlin delivered the news of his former teammate Chris Duncan's passing.

Duncan — the son of former longtime St. Louis pitching coach Dave Duncan — played for the Cardinals from 2005-2009, and was a member of the 2006 World Series title team. The outfielder/first baseman was a key part of that championship squad as a rookie, with 22 homers and a .952 OPS.

In 2011, Duncan joined sports radio with 101.1 FM- WXOS (ESPN Radio St. Louis). But a year later, he was diagnosed with brain cancer and took time off from the job. In March 2018, Duncan announced on air that the tumor had returned. And in January 2019, Duncan took a permanent leave from WXOS.

Dunc will be taking a permanent leave from 101 ESPN to continue his fight against cancer and focus on health. If you pray, please keep him in your prayers. If you don't, keep him in your thoughts. He is our brother and we miss him deeply@AnthonyStalter @Bettlach101ESPN

Here’s what Anthony Stalter — Duncan’s co-host on “The Turn” — had to say in January regarding the news of Duncan’s permanent leave (via the St. Louis Post-Dispatch):

And here’s what WXOS  tweeted after Friday’s horrible news:

It’s with an extremely heavy heart that we announce that our former teammate Chris Duncan lost his battle today. He will always be a part of our family at the station and a big part of our community! RIP Dunc we love you! pic.twitter.com/IWqB9z2sAv