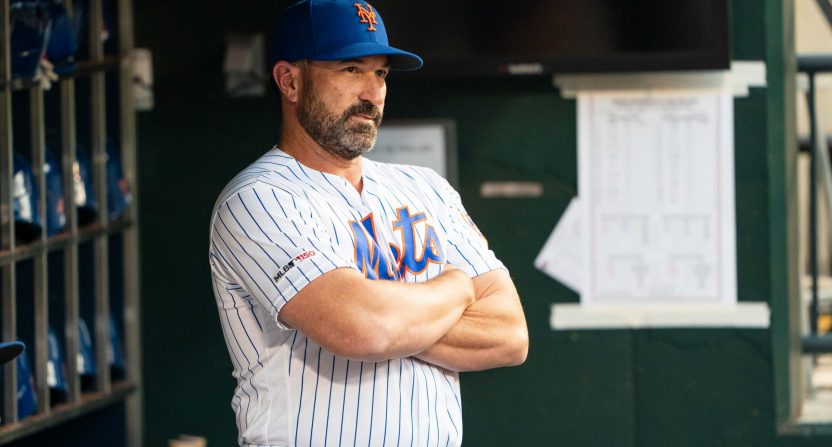 Five women who work in sports media have accused former New York Mets (2018-19) manager Mickey Callaway of lewd behavior and unwanted advances that “spanned at least five years, multiple cities and three teams,” as reported in detail by Brittany Ghiroli and Katie Strang of The Athletic. Callaway is now the pitching coach for the Los Angeles Angels (since 2020), and served in the same role for the Cleveland Indians in 2013-17.

The five women told The Athletic that Callaway “aggressively pursued” them, “sending three of them inappropriate photographs and asking one of them to send nude photos in return.”

Additionally, Callaway allegedly “thrust his crotch near the face of a reporter as she interviewed him,” and “told one of the women that if she got drunk with him he’d share information about the Mets.”

Callaway responded to the allegations in an email to The Athletic:

“Rather than rush to respond to these general allegations of which I have just been made aware, I look forward to an opportunity to provide more specific responses. Any relationship in which I was engaged has been consensual, and my conduct was in no way intended to be disrespectful to any women involved. I am married and my wife has been made aware of these general allegations.”

The Angels also issued a response, saying that they will “conduct a full investigation with MLB.”

Update: On Tuesday, the Angels announced that they’ve suspended Callaway:

The Mets claim that, roughly 10 months after hiring Callaway, they learned of an incident that happened before they hired him and proceeded to have an investigation. But he kept managing the team.

The Mets, when contacted by The Athletic, said that in August 2018 – about 10 months after Callaway joined the organization – the team learned of an incident that took place before it hired him. The team investigated that matter, a spokesperson said, but declined to reveal the nature of the incident, the outcome of that probe or whether Callaway was disciplined. Callaway continued managing the rest of the season.

MLB claims that it has “never been notified of any allegations of sexually inappropriate behavior by Mickey Callaway.” And the Indians haven’t issued a response.

The whole article is a necessary read and disturbing reminder of what women in sports media have had to deal with all too frequently.

In one email, Anne recalled, Callaway wrote: “Let’s go get drunk, I will tell you what’s going on with the team.”

This sort of thing happens way too often to women in sports media. While we are just trying to do our jobs. https://t.co/W8p8ZnlbD5

And this report comes just two weeks after an ESPN report detailed explicit texts and images sent by former Mets general manager Jared Porter to a female reporter while working in the Chicago Cubs’ organization. Porter — who, like Callaway, was hired by Mets president Sandy Alderson — was fired by the Mets on Jan. 19.