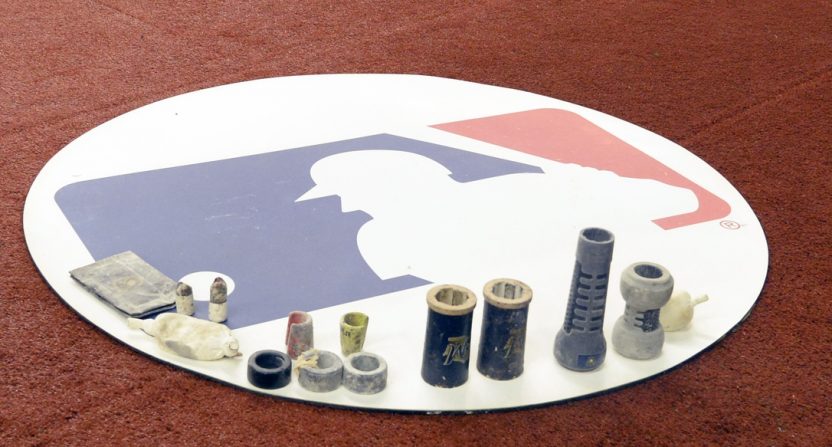 The MLB Postseason starts next week with the newly expanded Wild Card round on ESPN and TBS. Following those eight best of three matchups, the “proper” playoffs begin with the traditional best of five Division Series matchups, taking place in bubbles in Houston, Arlington, San Diego, and Los Angeles. The Division Series will air on TBS, Fox, and MLB Network, while the LCS airs on TBS and Fox and the World Series is exclusively a Fox property.

It’s been a tumultuous year for MLB on and off the field, as it’s been for sports (and for that matter, most industries) across the world. With no fans in stadiums, fake crowd noise has been piped in to game broadcasts. Most teams have filled the stands with cardboard cutouts of fans. Fox has inserted digital fans into its game broadcasts. National broadcasters are calling games from studios, while local broadcasters are calling road games remotely and some are even not in the stadium for home games. It’s been an incredible change of pace, but when implemented well, many of the changes fade into the background.

But as we move into baseball’s Postseason, it’s important for MLB and its broadcast partners to make the broadcasts of these playoff games as close to authentic as possible. It’s not going to be easy, especially with some of the restrictions that have been put in place because of the pandemic. But if MLB, ESPN, Fox, TBS, and MLB Network want the Postseason to feel special, here are five improvements that the networks should implement heading into October.

Get those virtual fans outta here

Who wants to watch a playoff game and see this shit?

Here's a look at the virtual fans at Wrigley Field for the Cubs-Brewers game on Fox. pic.twitter.com/rmA5lENFRH

Fox’s virtual fans have not been received well at all this season. Their implementation on broadcasts has been spotty (at best), the motion of the virtual fans could not look more awkward, and they add nothing positive to the broadcast. We all know the seats are empty (minus those cardboard cutouts). We see the empty seats on replays and from some camera angles. Yet, we’re still doing this virtual fan thing from some camera angles? Come on. The reaction has been overwhelming negative, and this is an experiment that should go in the trash can of sports broadcasting history with Scooter the talking baseball, the glow puck, and Jason Witten’s commentary career.

None of the networks have announced their broadcast plans for the Postseason quite yet. But when they do, it would be great if each series had a consistent broadcast team, and if those broadcasters were on-site.

The consistency hasn’t been much of a problem for MLB’s Postseason. Usually, each series will be called by the same broadcasters, with the exception of MLB Network’s two Division Series games. I’m somewhat worried that won’t be the case this year, with the potential of games being called from either the studio or home studios. This could theoretically allow networks to mix and match their broadcasters, which would screw up continuity and give viewers an inconsistent performance across games.

That brings me to the second point – if possible, get those broadcasters in the stadiums. There’s a world of difference between games called from the studio and games called from the broadcast booth in the stadium. When broadcasters are calling games from the studio, they occasionally miss things that take place off camera (defensive positioning, fair/foul calls thanks to bad angles, bullpen/bench activity, etc). There also seems to be an inordinate amount of awkward silence and lag during those studio games, which aren’t as common when games are called from the stadium. If games are called remotely, I’m fully expecting a technical difficulty to pop up that will result in minutes of silence or off-topic discussion while the game rolls along in front of us on our screens.

I’m aware it might be difficult to get broadcasters on-site in the early going, especially since ESPN will be airing seven of the eight Wild Card series (and that would require a whole lot of broadcasters). But from the Divisional Series round on, especially with just four bubble sites (two of which will be re-used in the LCS and World Series), let’s get those broadcasters in the ballparks instead of from studios in Los Angeles, Atlanta, and Secaucus.

I get it: 2020 has been a very different season, unlike much of anything we’ve seen before. Broadcasters need to fill time, and they generally can’t have in-booth guests. That has led to a glut of distanced Zoom interviews on the broadcast, and I’ve gotta say: it’s not working for me.

For a fan watching at home, the awkwardness is off the charts. There’s no in-person rapport, given that the subject is on the other side of a screen. There’s also a natural lag with the interviews, leading to more awkward silence than is really necessary in these interviews. Just to top it off, the announcers are supposed to be calling a game in addition to interviewing someone through another screen, adding to the state of chaos in the broadcast. It just does not work, and puts the game (which is the whole reason I’m watching this in the first place) in the background, usually in favor of an interview that has nothing to do with the game we’re watching.

If the networks are that desperate to get interviews with guests in, at the very least, pre-record them and drop clips throughout the broadcast during dead moments. I’d rather hear 30 second clips from an interview with, say, Ozzie Smith coming out of commercial breaks than I’d rather hear a ~ten minute interview with him during an inning that could potentially have some action in it. If the interviewee is in the booth (or even in the stands or in the dugout), at least they’re looking at the same thing as the broadcasters and can talk about what’s going on in front of them. Let’s keep the broadcast’s focus on the game instead of dragging in people to talk about topics wholly unrelated to what’s going on on the field. This is the playoffs, dammit.

Make the most of empty seats

I’ve already railed against virtual fans. I’m assuming that since the final three rounds of the playoffs will be held at neutral sites, there won’t be any fan cutouts in the seats (just what we don’t need: cutouts of Astros fans at a potential Cubs-Braves playoff series). That would lead to a perfect opportunity for the networks to make the most of these empty seats and experiment with new camera angles. I feel like only a few RSNs have taken advantage of the opportunity this year, and if there’s any time to take advantage of it, it’s during the playoffs at neutral site venues.

Even though teams and networks have all this technology at their disposal, the core broadcast itself doesn’t feel like it’s evolved all that much. While pushing that evolution in the playoffs is something of a gamble, networks are never going to get a better time with all of the empty seats and concourses. And even if that’s just a short-term change with fans theoretically returning to ballparks next year, it could at least represent a base for future long-term changes.

Take all the complaining down a notch or twelve

Two years ago during the MLB Postseason, I wrote a column imploring MLB’s broadcasters to at least pretend to like baseball. This time around, my message is somewhat similar – please stop complaining so much about baseball while calling baseball games, broadcasters.

I get that an analyst’s job is to analyze, but far too often this year (and in prior years too, for that matter), I feel like analysts spend their time complaining about the game. Instead of talking about the good of the game, they harp on strikeouts, productive outs, pitching to contact, velocity, how things were “back in my day,” and a lack of bunting and base stealing. It’s infuriating, and completely undermines the product we’re watching.

When Fernando Tatis Jr or Ronald Acuna Jr is hitting, I don’t want the first thing I hear about to be their strikeout totals. I want to hear about how awesome they are at baseball, and how much fun, passion, and excitement they’re bringing to the game. It would be great if we didn’t hear about Marcell Ozuna’s clubhouse fit, and heard more about how he leads the National League (as of Wednesday) in both RBI and homers and is helping power one of the most loaded offenses in the league. Yu Darvish’s 2020 season should be celebrated, and we shouldn’t have our time wasted denigrating analytics and overcautious management if he gets pulled after five innings of a game.

In short, while it’s not the job of broadcasters to promote the game, it sure as hell wouldn’t hurt if they talked up the game instead of telling me why everything on the field is awful. If it sucks so much, why should I even bother watching?