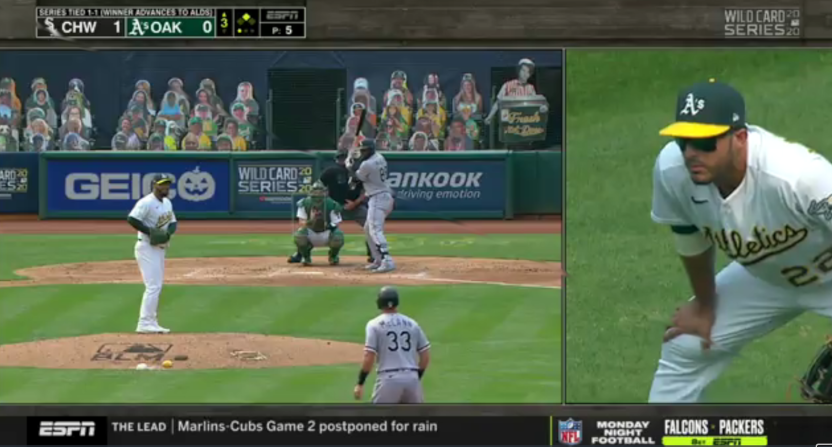 The last several years have seen a rise in in-game interviews with on-the-field MLB players, something that started during All-Star Games and has spread to other broadcasts, including playoff games. Thursday’s Chicago White Sox-Oakland A’s game was a particularly interesting example of that, as A’s outfielder Ramón Laureano wore a microphone during the top of the third when three straight balls were hit to him. The first one, a double from Eloy Jimenez, led to Laureano delivering a f-bomb (“Damn, he can FUCKING run!”) that was broadcast live:

After that, Yoan Moncado hit a fly ball to Laureano. And after that, Luis Robert hit a grounder to center field. Laureano fielded it and fired home to try and catch Jimenez (a throw tracked at 97.3 miles per hour), but pitcher Yusmeiro Petit tried to cut the throw off to make a play on Robert advancing to second. Petit only knocked it down, though, and didn’t recover in time to get Robert. That led to some more cursing from Laureano, but ESPN was faster with the bleep button this time around:

Broadcasting a player’s comments live while he’s in the middle of trying to make a play is a controversial move, and this particular sequence led to a lot of criticism for ESPN. One particularly notable comment came from Milwaukee Brewers’ pitcher Brett Anderson:

Players getting interviewed on the field during playoff games is lunacy

And interestingly enough, play-by-play announcer Dave Flemming addressed some of that criticism during the bottom of the third:

“We want to thank Ramón Laureano once again for being with us from the field in the middle of a playoff game. I know it makes some people uncomfortable. I think it’s worth saying out loud that we ask players nicely. The players’ union and Major League Baseball have encouraged players, even in playoff games, to be willing and volunteer. Ramón wanted to do it, he told us we should do it more often when we were on the air. I know it makes some people cringe, especially when he’s in the middle of all the action and we’re talking to him, but it is an insight that is hard to get in any other way, in any other sports broadcast.”

Analyst Jessica Mendoza added her praise for the concept, and noted that she’d been miked up during high-level international softball games and enjoyed the experience:

“Especially when the players want to do it. I was watching the Dodgers’ game last night and Justin Turner, he actually asked to stay on. He was at third base talking to the guys, and he literally walked up himself to his at-bat, just talking through Dave Roberts’ conversation from the dugout. The guys know. And Marcus Semien said ‘I could never wear a mic, are you kidding me? I’d get too distracted.’ Mark Canha was the opposite, he said ‘I loved it’ when he wore a mic yesterday. I’ve done it myself, I’ve done an ESPN game where I played in for the U.S. team, I was out in left field, and my teammates looked at me sideways because they thought I was talking to myself, but I absolutely enjoyed it.”

There’s a valid point in there; this is a thing that players are volunteering for rather than having shoved on them, and many of them do appear to actually enjoy it. So it’s not necessarily worth being offended on behalf of players who don’t mind, or suggesting that it’s distracting for them. If they’re willing to do it and don’t think it’s reducing the level of their play, there’s maybe some merit to that; they would know better than outside observers (although there is always the question of if they’re just saying what they want people to hear, but even still, as a voluntary thing, this would ultimately just go away if players decided it was actually performance-reducing).

But the angle this does deserve criticism from is in terms of what it means for the viewing audience. Yes, there probably are some people who enjoy live in-game interviews, but there also are a lot of people who find them distracting and detracting from the overall game broadcast. And that’s maybe even more true when it comes to broadcasting players who are actually on the field rather than conducting in-game interviews with coaches and managers (something that’s been going on even longer, including during the playoffs).

Are there people who like these kinds of candid in-game interviews? Probably. Networks keep trying to mic up players during live games, so they clearly think there’s an audience for it, and it can sometimes give viewers some insight. And maybe it draws in some new fans (although it’s hard to envision anyone being ‘Eh, I don’t really care about baseball, but I’ll watch because they’ll broadcast what a center fielder is saying during the play!’). But this is also jarring and disconnecting to a lot of the viewing audience, especially during a critical playoff game.

And it seems like there’s a middle ground they could find. NFL Films, for example, has long found success with an approach of capturing player comments during a game, but only broadcasting them on later, edited programs where people are specifically tuning in for that. And live game broadcasts have also often put microphones on players or coaches, but only broadcast selected comments from them after the fact rather than as they happen; that’s often a lot less distracting, and it allows the broadcast team to find what’s really notable. But, for the moment, it appears like MLB’s going to continue with these in-game interviews of on-field players. And while that may be appealing to some, it’s going to continue to take a lot of criticism from other viewers.