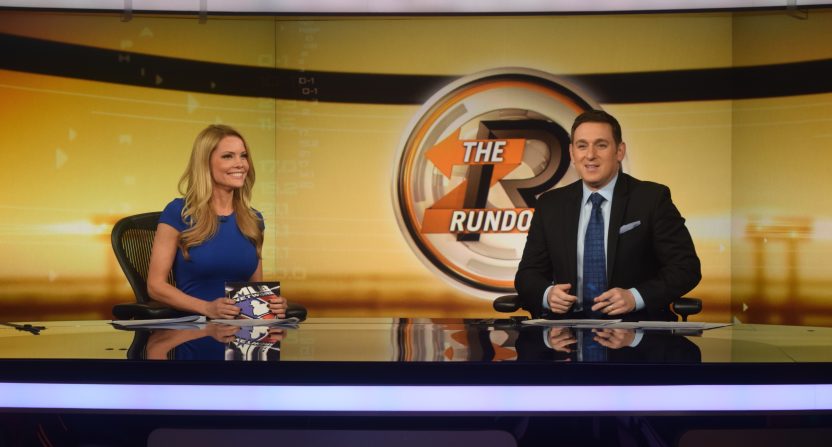 On July 29, 2016, Amy and Matt Yallof planned to spend the afternoon together, painting their Armonk, New York basement as a surprise to their three kids, who were off at sleep-away camp.

But when Amy returned from driving her mother to the airport late that morning, she found her 47-year-old husband lying on the floor of their house, blind and paralyzed.

Amy frantically dialed 911 and followed Matt to Westchester Medical Center, where doctors told her he’d suffered an ischemic stroke. His eyesight was at risk and his prognosis for recovery was highly uncertain.

Before that day, Yallof had been a self-described worrier, chronically anxious about one thing or another, including at his job with MLB Network, where he hosted The Rundown. Now the stakes were so much higher than anything he’d faced before: Even after it became clear he would survive, Yallof needed to rebuild his whole life, almost from scratch.

Yallof spent a week in the ICU, then a month in a rehab clinic. He forgot names and struggled to remember conversations he’d had an hour earlier. His sight came back, but his mental processing was slow, and he had to re-learn how to walk and speak.

But eight months after the stroke, Yallof has made dramatic strides. He began to drive again in October and has resumed a more or less regular routine, despite a lack of full feeling in the right side of his body. He has eased back to work at MLB Network and this season will host MLB Network Strike Zone, a baseball equivalent of NFL RedZone, every Tuesday and Friday.

In a phone call with Awful Announcing last week, Yallof’s voice was deliberate but clear as he explained what his life has been like since that day last July and where he stands in his recovery.

Accompanying Yallof’s recovery has been a reawakening of sorts, a realization that stressing the future means nothing when the present isn’t promised.

“It was about saving my husband’s life”

In the days after Matt’s stroke, the Yallofs were told the hospital would provide physical and occupational therapy but not speech therapy, which would have to wait for later.

To Amy, that was unacceptable.

Amy knew that Matt’s ability to speak was vitally important, not only to his livelihood as a television anchor but also to his sense of identity. So she told doctors that if they wouldn’t provide a speech pathologist, she’d bring one in herself. The hospital relented, and Matt’s speech therapy began immediately.

Yallof says that from the start he took speech therapy more personally than physical or occupational therapy. While he never worried much about re-learning to walk, he was terrified his speech would never fully come back.

“The speech was where I would get emotional,” he recalls. “And it’s because of how I made my living. To be truly honest I didn’t know if I was going to get better than I was in August.”

Yallof knows he wouldn’t have made it this far without his wife’ tireless advocacy.

From the moment Yallof arrived at the hospital that first night, Amy served as his liaison in all aspects of his recovery. She became an amateur expert in ischemic strokes. She pressured doctors to make sure Yallof was getting proper care. She filled out mountains of paperwork. She managed the emotions of the couple’s 14-year-old daughter and 12-year-old twins. She coordinated with Yallof’s bosses to ensure he wouldn’t lose his salary.

“It wasn’t about me, it was about saving my husband’s life,” says Amy, a marketing consultant with experience in project management. “And anything and everything I had to do and know, it had to happen immediately.”

“Living in the moment”

In the days following the stroke, two of Amy’s friends set up a page on the crowd-funding web site YouCaring, ostensibly as a way for the Armonk community to chip in on Yallof’s mounting medical expenses. But the page was quickly passed around on social media, and before long donations poured in by the hundreds, often accompanied by well-wishes.

Today, that page documents just how loved Yallof is in and out of baseball. A total of 501 people have donated, including dozens of recognizable names from sports media and several current or former Major-League players. Even some fans have sent over a few dollars, with notes about how they enjoy Yallof’s broadcast work. The outpouring of affection was almost as meaningful for the Yallofs as the $69,192 the page has raised.

“It was overwhelming who reached out and wanted to support us,” Amy says. “People just really showed how loved he was.”

But of all the well-wishes Yallof received from friends, family, colleagues and strangers, one sticks out eight months later.

It was August, only weeks after the stroke, and Yallof was frustrated with his progress in rehab. He turned to Amy and, with doubt in his eyes, asked her how his life would end up. She looked back at him and responded with a sturdy voice. “We’re going to do what we have to do to get you back to where you were,” she told him.

Emboldened by her assurance, Yallof developed a new outlook. No longer would he worry about his misfortune or spend his life constantly fretting what’s next.

“I didn’t have to sit there and say ‘You know, I should start living in the moment.’ It just happened,” he says. “Because unlike other illnesses, there was no build-up to this. I wasn’t sick for a long time and dealing with the consequences. I went from perfectly fine to nearly dead in one second. So there’s no way to plan for the future and there’s no way to live for the future.”

Yallof no longer stresses things out of his control. In a weird way, he says, the stroke was “a wonderful self-correction.”

“Matt, by his own admission, had a lot of stress and anxiety in his life before this happened, and in many ways this has changed him for the better,” Herz says. “He’s had nothing but an unbelievably positive outlook and a positive attitude toward getting better, toward getting back to work, toward being there for his family. “

That example has reverberated around baseball. For Ken Rosenthal, who worked with Yallof on The Rundown, the stroke was a symbol of how fragile life can be. If such a warm, friendly person, “a beloved figure in the building,” in Rosenthal’s words, could suffer such a calamity at such a young age, no one was safe.

“It’s one of those things that just kind of snaps your head back,” Rosenthal says.

Fellow MLB Network host Brian Kenny recalls texting with Yallof after his stroke, at first suspecting that Amy was replying on her husband’s phone, then smiling when the texts became more personal and he knew Matt was again speaking for himself.

Months later, when Yallof and Kenny reunited in the MLB Network office, Yallof wrapped his friend in a bear hug and didn’t let go for what felt to Kenny like a full minute.

Kenny says Yallof’s ordeal made everyone at MLB Network reevaluate what life was about.

“We all stopped and took stock that this can happen at any moment,” Kenny says. “How often do you stop and think about that? How often do you really stop and think about that and just focus? You get very busy, and you just keep motoring through. Matt has a very different perspective having seen how quickly it can change and how quickly it can all end.”

Yallof, his wife and his agent all say MLB Network has been incredible about accommodating him during his recovery. The network has made sure Yallof is paid in full, fighting insurance claims on his behalf and telling him to focus only on getting better. Even as his health has improved, his bosses have encouraged him to move slowly, which he says he greatly appreciates.

Last week, Yallof spoke briefly at the network’s annual production seminar, explaining all that had happened to him and thanking everyone in the building for their support. He received a standing ovation as he entered and another as he left.

The idea, he says, was to close the book on this period of his life so he could get back to his job.

“It was something I wanted to do to express a thank you but also so I could put it on the side and concentrate on work,” he says. “So now in my mind I’ve told everyone, I’ve shared with them, I’ve thanked them, I’ve complimented them. And now in my mind I am 100 percent ready to move forward.”

Yallof says his primary goal is to take care of his family and ramp up his hours at work. When his life settles back down, he hopes to raise money for people without health insurance who go through trauma like what he faced. For now, he’ll host Strike Zone twice a week to build up his stamina, then work with his bosses to figure out the next step.

But ask him if he’ll get back to where he was once was—a full workload at MLB Network included—and all uncertainty disappears from the voice he almost lost.