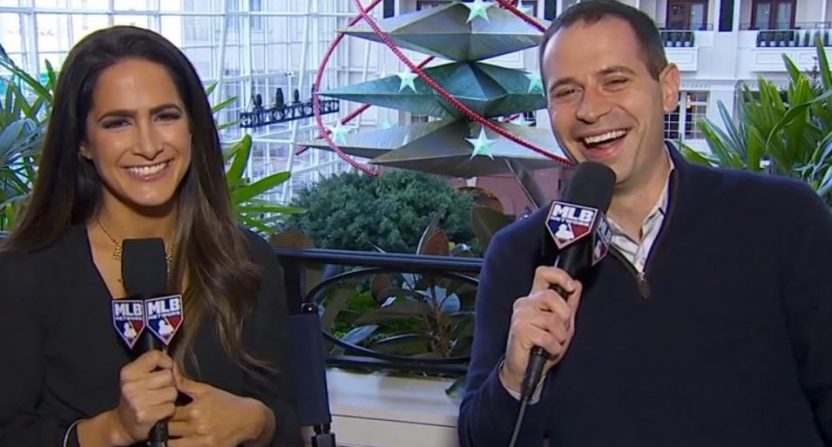 Jon Morosi’s first taste of the World Baseball Classic came on March 7, 2013, when he watched from the press box as Italy scored two ninth-inning runs to beat Mexico 6-5 in Scottsdale, Arizona.

The game had some personal relevance for Morosi, then a Fox Sports writer—he is Italian-American, his wife his Mexican-American, and that was the first ever baseball game for his newborn daughter, Gabriella—but that wasn’t the only reason he was entranced by the event.

“Here we were at a Spring Training venue in Scottsdale, Arizona, and two teams that you wouldn’t have thought of being the marquee teams produced this amazing game,” Morosi told Awful Announcing last week. “I remember the emotions that day of the fans on both sides was palpable, even for me up in the press box.”

From there, he was hooked.

Four years later, Morosi works for MLB Network and MLB.com, where he’s become the World Baseball Classic’s most tireless advocate. For weeks, his Twitter feed has been dominated by WBC news, while MLB Network has devoted segments to “J.P. Morosi’s International Pastime.” Now, with the event underway as of Monday morning, Morosi has a tall task ahead of him: make the rest of America love the World Baseball Classic as much—hell, even half as much—as he does.

The first three World Baseball Classics (held in 2006, 2009 and 2013) were met with fierce enthusiasm in many baseball-playing countries around the world and something approaching apathy in the United States. In 2013, MLB Network averaged only 285,000 viewers for all WBC games (granted, many of which started at awkward times) and 712,000 for the six U.S. games. The most-viewed contest, a second-round matchup between the U.S. and the Dominican Republic, attracted 883,000 viewers, or about two thirds of what MLB Network had drawn for an ALDS game between the Tigers and Athletics the previous October.

A certain cohort of diehards celebrated competitive baseball in March, but many other baseball fans seemed to shrug. After all, the U.S. had a B-plus roster, other teams were mostly anonymous and fans were busy worrying about their own hometown squads.

This year, MLB Network again has exclusive U.S. rights to the WBC and will air every game of the tournament, around the clock. As part of a deep lineup of commentators, the network has enlisted Matt Vasgersian and John Smoltz to serve as its lead broadcast team, with Morosi reporting from the field.

In that sideline role, Morosi will share with the world the enthusiasm for the WBC his colleagues have come to admire—and sometimes roll their eyes at.

“His obsession with the World Baseball Classic borders on, like, something that he should be treated for,” Vasgersian says.

“He was wearing us out with World Baseball Classic minutiae as early as 2015. He was giving us performance updates and potential roster permutations for Team Pakistan based on their fifth-place finish at the Asian Games.”

When Awful Announcing called Morosi last week to talk about the WBC, his passion spilled through the phone. A question about his thoughts on covering the event launched a three-minute ode to the tournament. A comment about the United States’ pitching rotation prompted a lengthy dissertation on the structure and timing of the WBC and the potential to stage international competition at the All-Star Break. Once he got going, it was difficult to get him to stop.

According to Morosi’s colleagues, the enthusiasm is no act. It’s how he approaches every day on the job. Veteran reporter Ken Rosenthal recalls working with Morosi at Fox and marveling at both his energy and his demeanor.

“There were times when I’d have to say, Jon, slow down, man,” Rosenthal says. “But you’ll never speak to a person who works with him who doesn’t love him. Because he’s just a nice person, he has that enthusiasm, and he’s just a pleasant guy to be around.” 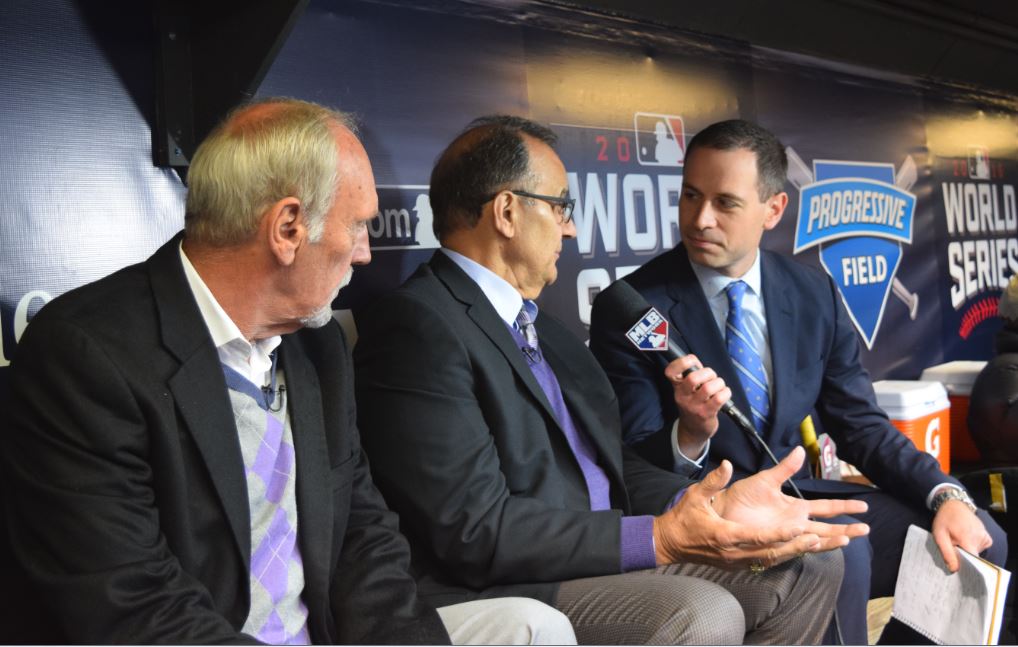 Morosi grew up in Essexville, Michigan, a tiny town near Lake Huron. He loved sports—baseball and hockey in particular—and played quarterback for his high school team (which one season went 0-9). From there he attended Harvard, majoring in environmental science and public policy but working for the sports information office, then as hockey beat reporter for The Harvard Crimson.

Toward the end of college, he got a job answering phones and taking high school sports scores at The Boston Globe. In 2006, was hired to cover the Detroit Tigers for the Free Press, and delighted as the team reached the World Series in his first season. Three years later, he was hired as writer at Fox Sports, thanks in part to Rosenthal’s match-making, and stayed there until April 2016, when he made the switch to MLB Network.

Now, at only 34, he has what he considers his “perfect job:” a lot of baseball, with some hockey on the side at the NHL Network. He also does sideline reporting for Fox on Saturdays and during the MLB Postseason.

Throughout Morosi’s brisk rise, he’s carved out time for international competition, whether be it the WBC or the Caribbean Series. This spring, while most baseball reporters have been writing “best shape of his life” stories from Spring Training, Morosi has been contemplating, say, how the Netherlands will fill out its infield.

Morosi is drawn to international baseball for several reasons. For one thing, he’s a lover of language and culture. He’s conversational in Spanish and has studied Italian. When he and his wife hired a Chinese nanny, he began peppering her with questions, and he now knows bits of Mandarin. Vasgersian cites his language ability and Harvard pedigree as evidence that he’s “overqualified to be covering baseball.”

“Maybe there’s a part of me that’s always wanted to be a foreign correspondent or something, but I love baseball too much,” Morosi says. “So this is my way of marrying those two things together.”

Beyond that, Morosi adores international baseball because it produces passion to match his own. He loves to hear the fans chanting and singing and to see the players whooping and cheering. He fondly remembers the 2013 WBC Final, when Dominican players came pouring out the dugout to celebrate a simple RBI double in the first inning. He saw that moment as a counter to anyone who’d ever accused baseball of being dry.

“No one was saying ‘Where’s the passion, and where’s the excitement in baseball?’ because it was there, right in front of you,” Morosi says. “Other than the playoffs in October, this is the most passionate, emotional baseball you’re going to see.”

The 2017 World Baseball Classic is now underway, with Israel upsetting South Korea in Seoul early Monday morning. The United States’ pool, where Vasgersian, Smoltz and Morosi are assigned, kicks off Thursday, when Canada faces the Dominican Republic in Miami.

The WBC may never make it mainstream in the United States. American audiences may never learn to love the event with the same zeal as those in the Dominican Republic or Japan. Rosenthal, for one, fears that the WBC will never be able to draw fans’ attention from their teams’ Spring Training storylines.

But Morosi is optimistic. He looks at the Team USA roster—devoid of Mike Trout, Bryce Harper, Kris Bryant and Clayton Kershaw—and sees an All-Star team worthy of American attention. He looks at third baseman Nolan Arenado and sees a superstar ready to introduce himself on an international stage. And he looks at the WBC and sees a reflection of what baseball at its best can be: a game played with passion.