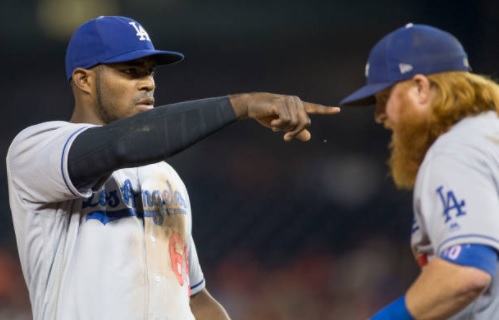 Last weekend was a rather busy one on sports TV. On Saturday night, Clemson-Louisville and Texas-USC were among the college football matchups competing for viewers in primetime. Sunday night may have been even more competitive with Packers-Falcons on Sunday Night Football, the Emmy Awards and Ken Burns’ The Vietnam War documentary on PBS all hunting for an audience.

Another Sunday night option was the Los Angeles Dodgers playing the Washington Nationals in a possible preview of the National League Championship Series on ESPN’s Sunday Night Baseball. Unfortunately for ESPN — and for Major League Baseball — viewers didn’t seem particularly interested in watching the two best teams in the NL play each other, neither on Sunday night nor the weekend as a whole.

According to Sports Media Watch, Dodgers-Nationals drew a 0.55 rating and 855,000 viewers on Sunday Night Baseball. That’s the smallest audience for ESPN’s Sunday night MLB telecast since 2013, when the Mets played the Nationals. (SMW mentions a Royals-Orioles game that drew a far lower number, but points out that the broadcast was bumped to ESPN2 because of a delayed tennis match.)

The Dodgers-Nationals series didn’t fare any better Saturday on Fox. Granted, the telecast was regional, though went out to 81 percent of national TV markets. And the game was televised in the afternoon, not in prime time. But an 0.7 rating (a 42 percent drop from the same time last season) and an audience of 1.05 million viewers (38 percent drop) are eyebrow-raising numbers. (By the way, the rating was down 50 percent from 2015, while the audience dropped 46 percent.)

That 0.7 rating tied for the lowest number ever for Major League Baseball on broadcast TV. A Rays-Yankees broadcast tied for the same number last year, but went up against the Rio Olympics in prime time.

As media observer Eric Fingerhut points out on Twitter, part of the problem might be the Nationals. Despite their success, along with stars like Bryce Harper and Max Scherzer, national TV audiences don’t seem particularly interested in watching the Nats. They’re a team that should get a national spotlight and would presumably draw a larger viewership, but that hasn’t been the case.

Nats have two least-watched ESPN Sunday night games this year and were in the three-lowest of past five years.

This could be a troubling development in the postseason if Washington gets to the NLCS and World Series. Playing the Dodgers might not even matter, based on the numbers from last weekend.

But last month, Nats-Mets got record low ratings, too. For whatever reason, seems Nats don't draw on national TV.

Is this a result of baseball not having many compelling storylines throughout the 2017 season? The Dodgers and Nationals basically went unchallenged throughout the season, a circumstance that applied to virtually every division race. Fighting for the best record in the NL and getting home-field advantage in the postseason aren’t really the compelling sort of stakes that could draw viewers.

Yet if Clayton Kershaw and Max Scherzer had been the starting pitchers last Sunday night (rather than Hyun-Jin Ryu and Stephen Strasburg), perhaps that would have made some difference. For what it’s worth, neither pitcher — both contenders for the NL Cy Young Award — didn’t pitch in the weekend series. Depending on how the postseason develops for either team, that could be different in October. But will that be enough to draw more viewers?