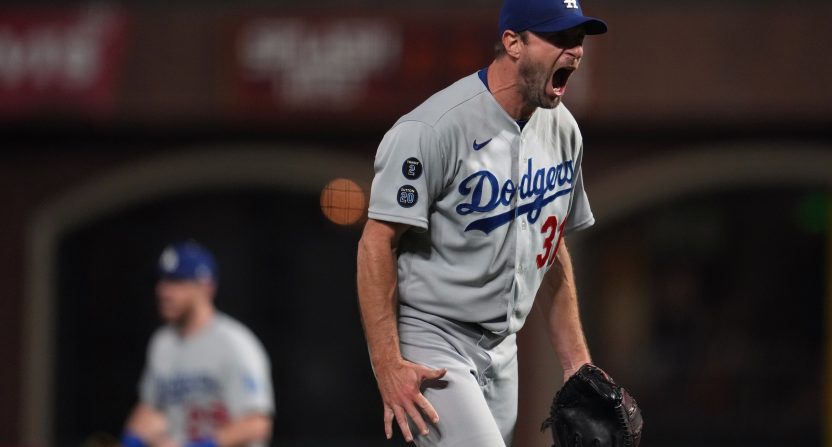 It’s hard to emphasize how much the Dodgers-Giants NLDS matchup has carried MLB’s Division Series viewership over the last week-plus.

The five most-watched Division Series games (of the 17 played) were the five games of the Los Angeles-San Francisco series. All drew at least 3.5 million viewers, with Monday’s Game 3 (3.55 million) as the low watermark, and Thursday’s Game 5 hitting the high mark (6.5 million). Each of those games went head to head with the NFL and started after 9 PM on the east coast, for whatever that’s worth. The series as a whole averaged 4.60 million viewers on TBS, despite the late start times.

When comparing to the other three matchups, its clear how much Dodgers-Giants carried the weight for the round. The other NLDS matchup airing on TBS, Braves-Brewers, averaged 2.23 million viewers (with four start times between 1 PM and 5 PM on the east coast), topping out at 3.065 million for Atlanta’s Game 4 clincher. In the American League, the Red Sox-Rays series averaged 2.65 million viewers, with 3.299 million viewers watching Boston’s Game 4 victory. Three of those four games started in primetime on the east coast and aired on FS1, with the fourth starting at 4 PM Sunday on MLB Network. Finally, the Astros-White Sox series averaged just 1.75 million viewers on FS1 and MLB Network, with no game topping two million viewers. One game aired in primetime (Sunday’s wild Game 3), and the rest aired in the afternoon.

The good news is that viewership, overall, is up from last year’s Division Series. The viewership for the two Wild Card games was also incredible, with ESPN’s broadcast of Yankees-Red Sox hitting a more than two-decade MLB high for the network, and the TBS airing of Dodgers-Cardinals becoming Turner’s second-most watched Wild Card game ever.

More good news is that viewership for the LCS last year was horrendous, outside of Game 7 of the Dodgers-Braves NLCS. It will be very hard for Red Sox-Astros to not top the 2.781 million average for the Rays-Astros ALCS last season, and I’d bet on the Dodgers-Braves rematch topping the 4.476 million that watched last year’s NLCS (I mean, the Dodgers-Giants did). This year’s NLCS also should comfortably sail by the 2019 NLCS on Turner, when the Nationals’ sweep of the Cardinals averaged just over four million viewers. The ALCS has a tougher task when compared to 2019 – Astros-Yankees averaged 5.77 million viewers for Houston’s six-game victory.

Start times for the LCS matchups past Monday have yet to be announced, but one game will be in primetime through at least Wednesday, and afternoon games will be on the slate both Saturday and Tuesday. The good news is that each of the next two Saturdays features a somewhat weak primetime college football schedule (though Game 2 of the ALCS will go head to head with Kentucky-Georgia on CBS, and I’ll hang up and listen if you want to talk about the Tennessee-Alabama and USC-Notre Dame rivalry games in two Saturdays) and the NFL primetime games on Sunday and Monday (Seattle-Pittsburgh and Buffalo-Tennessee) aren’t the worst possible matchups for baseball, nor are the primetime games on Thursday and the next Sunday (Denver-Cleveland and Indianapolis-San Francisco) in the event of a long NLCS.

But overall, while the numbers through the end of the Division Series are encouraging and the schedule looks favorable going forward, MLB shouldn’t start patting itself on the back for playoff viewership quite yet. There’s a non-zero chance that we’ll see viewership dramatically start slowing down in the LCS round.