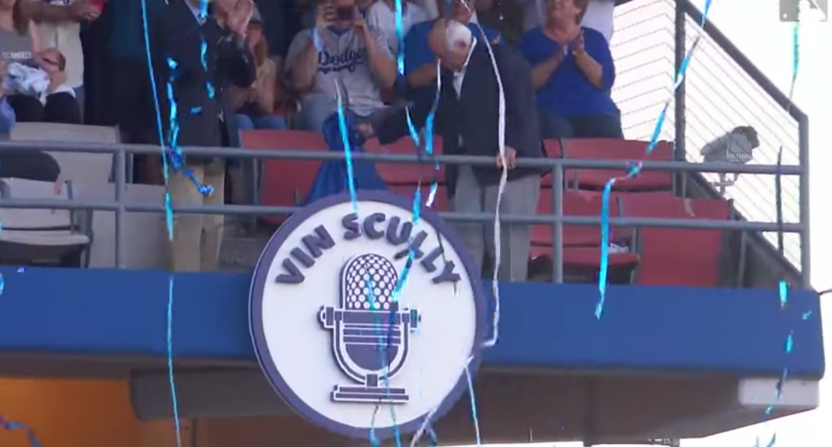 The Dodgers spent most of last September honoring retiring announcer Vin Scully, but it turns out they weren’t done yet.

Before Wednesday’s game against the Giants, the Dodgers bestowed upon the 89-year-old the highest honor the franchise has: a place in its Ring of Honor.

The Ring of Honor ceremony featured short remarks from manager Dave Roberts, followed by Hall of Famers Sandy Koufax and Tommy LaSorda revealing a microphone emblem with Scully’s name on it next to a row of retired numbers. Scully then spoke movingly about the other men the Dodgers had recognized over the years. Here’s the clip:

One of the many things that made Scully such a legend was his refusal to make anything about himself. That was reflected in how he called games—pausing at big moments to let the crowd noise speak for itself—and in how he dealt with praise during his farewell tour last year.

So, appropriately, Scully’s remarks Wednesday were not really about himself.

For one last time—and if you want to join me, that’s great: Hi everybody, and a very pleasant good evening to you.

This is a very emotional moment, but I am trying very hard to keep a stiff upper lip. Those are numbers to many, but to me they are friends of mine throughout my baseball life, from Pee Wee Reese No. 1 to Don Drysdale No. 53. And in between, dear pals. I can remember sitting at the feet of No. 39 Roy Campanella, and it was a spring evening in Spring Training, and I sat on the grass, and Campy sat on a bench, and he talked about the days playing in the Negro League, as they called it.

I can look at 24, the manager of the Dodgers [Walter Alston], the quiet but strong man who one day in Pittsburgh, after the Dodgers had lost the game and were passed by the Dodgers bus on the freeway, one of the Dodger players made a crack about, why don’t we have better buses. And No. 24 said to the driver, “stop the bus.” And he turned to the bus and said to the players, “I’m stepping outside. And if anyone wants to come out and discuss the travel transportation of this team, come and talk to me.”

But of all, I guess, I look at 1 and 2. No. 1 was Pee Wee Reese. He was always the captain. His wife was the house mother for all the young wives of the rookies who had joined the club. And of course, No. 2, Tommy LaSorda. I was telling the writers earlier, the first time I heard the name Tommy LaSorda was in Spring Training of 1950, and Buzzy Bavasi, the general manager of the team, said “I’ve got to leave and stop a kid from killing himself.” And I said, “What are you talking about?” He said, “We have a kid named LaSorda, and he’s gonna pitch batting practice to every kid in camp.” In those days, the Dodgers had 26 farm teams and 125 players known as free agents. So what Tommy was going to do for $50 was pitch to 725 kids in batting practice. So Bavasi said, “I’ve gotta stop this kid from killing himself.” But that was the first time I heard about the drive of Tommy LaSorda.

So with all those numbers, I see faces, I hear voices, I see their athletic ability. And now they welcome me home. But you know what? Just between you and me—and don’t tell management—I don’t deserve to be up there with them.

Anyway, I’m there, and I’m eternally grateful for the Dodgers for putting me there. And now, if you want to join me again, it’s time for Dodger baseball.

Scully joins 10 others in the Ring of Honor, including nine Hall of Famers, all of whom established themselves as franchise icons over the Dodgers’ 134-year history.

And no matter what Scully says, it’s obvious to anyone who listened to him that he thoroughly deserved it.