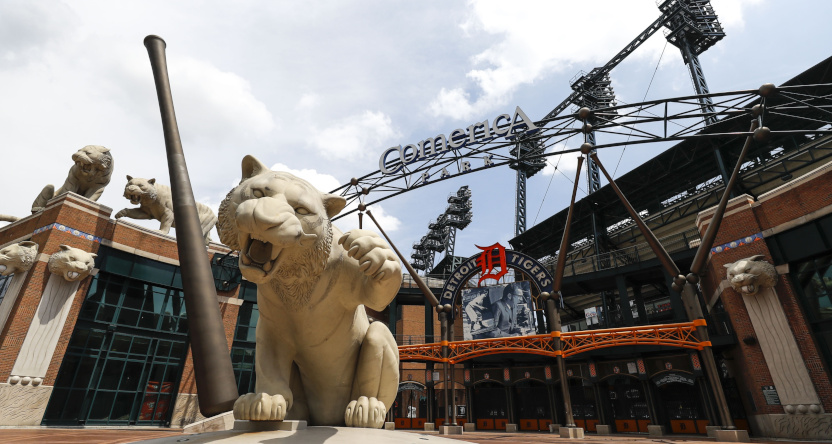 Preparations for this year’s shortened MLB season are continuing, with players reporting to camps at team stadiums (apart from the growing lists of those opting out) and teams conducting COVID-19 testing, training sessions, and intrasquad games, with exhibitions against other teams ahead. Local media have also been allowed to report on the training sessions and intrasquad games going on so far, and some of these games have aired on regional sports networks, or radio stations and YouTube channels. But many of those games haven’t been broadcast anywhere, leading to some complaints from fans looking for more information on them than just beat writer tweets and recaps. Well, this weekend will see the Detroit Tigers broadcasting their intrasquad games from Comerica Park (pictured above) live on their website:

You're in luck. Tigers announce they will live-stream (audio and video) this weekend's intrasquad games on https://t.co/O4sZvurFfw, with Dan Dickerson and Dan Petry on the call. Saturday's game begins at noon. https://t.co/buBiPKfAz8

Dickerson is the lead radio voice for the Tigers, while Petry is usually a studio analyst for Fox Sports Detroit. So that’s a bit of an unusual broadcast pairing; Jim Price is usually the analyst Dickerson is working with for Tigers’ radio coverage, and Dickerson is usually calling games for radio rather than games with a video feed as well. But both have been on TV game broadcasts in the past, and Dickerson’s a veteran broadcaster in his 21st season in the Tigers’ radio booth (and his 18th as the lead voice there), so he should be able to make this work. And for those Tigers’ fans who are interested in watching or listening to full intrasquad games, this is a nice option.