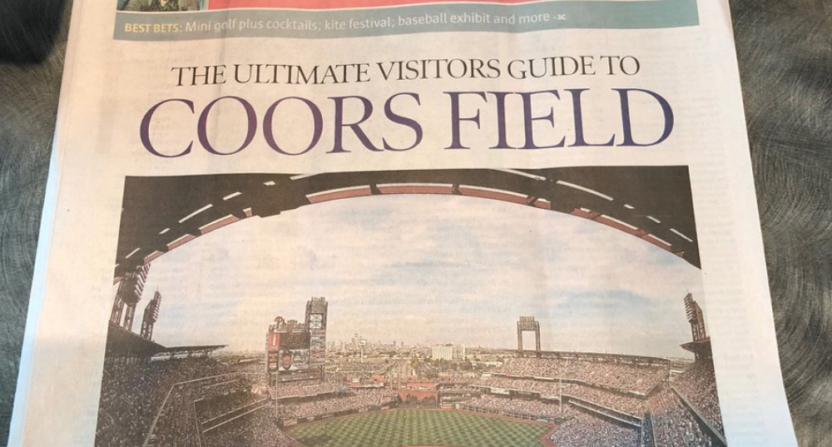 On Friday, the Life & Culture section at the recently depleted Denver Post ran a front-page feature with the large, all-caps headline, “THE ULTIMATE VISITORS GUIDE TO COORS FIELD.” The accompanying photo showed a beautiful baseball park filled to capacity, glimmering in the afternoon sun. It struck a perfect chord for the start of baseball season.

The problem? The “Coors Field” in the photo was not Coors Field at all. It was quite clearly Citizens Bank Park in Philadelphia.

There’s no real way to explain this one. The two parks do look somewhat similar, with scoreboards in left field and three decks of stands in right, but the giant “PHILLIES” sign at Citizen’s Bank probably should have been a hint.

We can’t know how exactly the Post got the wrong stadium (the photographed game does seem to have included the Rockies, which likely contributed to the confusion), but some people were quick to connect the mistake to the paper’s recent round of layoffs.

I take zero joy in pointing out the errors of other reporters.

But when you show a stadium in Philadelphia instead of Coors Field for the @Rockies home opener, it might be because you’ve fired too many great journalists. pic.twitter.com/1L4G4AaUoE

The Phillies, for their part, seemed to get a kick out of the error, quote-tweeting a photo of Coors Field as if it were Citizens Bank Park and tagging the Post.

What a lovely photo of Citizens Bank Park.

As if the glaring Coors/Citizens Bank mistake weren’t enough, the Post threw in a more subtle one for good measure, erroneously calling the 2007 NL West tiebreaker game the “National League West wild card game” in a photo caption.

As the ballpark mix-up buzzed around the internet Friday, the Post acknowledged the mistake and explained that it owed to a “production error.”

Due to a production error, an image of Citizens Bank Park ran in place of Coors Field on the cover of today's Life & Culture section. Please enjoy this beautiful image of Coors Field photographed yesterday. The Denver Post sincerely regrets the error. pic.twitter.com/0bwW2snOLb

People goof all the time, and we don’t want to beat up too much on whoever was responsible for this error. But as a general rule, readers might not be too interested in reading your visitors guide to a stadium you can’t even pick from a photo array.