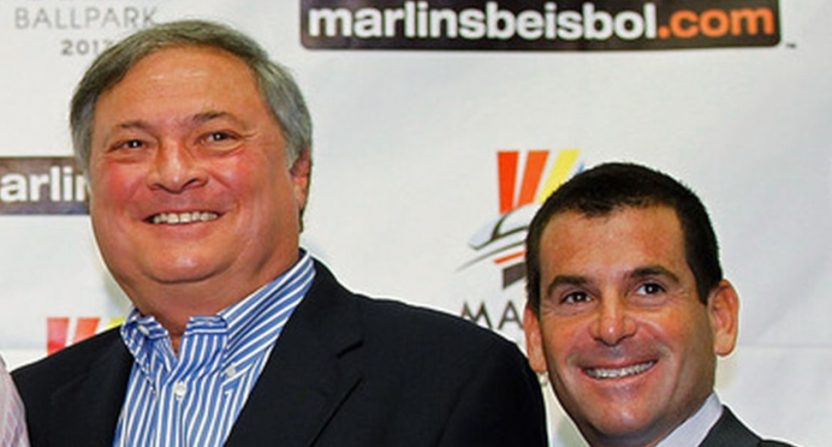 While there have been several cases of teams not wanting players or coaches to talk to particular media outlets, the approach that former Miami Marlins’ owner Jeffrey Loria took with then-team president David Samson (who also used to be Loria’s stepson; Loria was married to Samson’s mother from 1980-2005) was a bit stronger than usual. Samson (who learned he was fired by text alert when Derek Jeter and Barry Sherman took over the team last September, and then had to fire other members of the front office for Jeter)’s contract with the Marlins expired this Oct. 31, allowing him to speak freely about the team. Samson certainly did that in interviews this week, revealing some interesting stuff about the Marlins and several media figures along the way.

Samson (seen at right above with Loria) is now a CBS Sports HQ analyst and regularly opines on baseball on Twitter, and he’s offered some notable criticisms in both of those forums. But he went even further this week in interviews with Barry Jackson of The Miami Herald and ESPN’s Dan Le Batard (in the local hour of Le Batard’s radio show on Miami’s 790 The Ticket). Jackson has transcribed the highlights from both those interviews in the first two parts of a three-part series, and there are a lot of them, with Samson really napalming every bridge you could think of. But one highlight that particularly stands out is what Samson says about why he stopped appearing on Le Batard’s show, part of a general media ban Loria imposed on him in 2013:

Samson said Loria once told him that “if you appear on Le Batard’s [show] again, I am firing you for cause, which means you don’t get paid.” So I love you, but not that much. His view was you manipulated me into telling you things I otherwise wouldn’t tell you. The joke of it always was it was me manipulating you when I wanted to get certain things out there.”

Samson has a segment on Le Batard’s show in which he talks about movies and baseball, but Loria forced Samson to cancel the segment during his ownership.

Well, that’s certainly quite the tactic from Loria, especially when it comes to someone as highly-placed as a team president. Banning a team president from talking to a particular media outlet is a new one. That was far from the only media item of note in these Samson remarks, though; here are a couple of others.

He said the Marlins never pursued Alex Rodriguez as a player in the late stages of his career because “there was no possible way anyone could be worse for your team. The juice wasn’t worth his squeeze any more because he wasn’t a good player any more. We would have had the worst part. We would have had the circus without the parade.”

…On the Marlins’ decision to fire Joe Girardi after a 78-84 season in 2005 that earned him National League manager of the year, Samson told Le Batard: “Five minutes before we fired him, Joe in front of the 1,200 fans who were at the game [at what’s now Hard Rock Stadium], said, ‘Sit the bleep down’ to the owner. That’s the biggest act of insubordination you could ever do.

“We had to fire him. It was the craziest day of all time. We fired him and then we had to re-hire him two hours later because we told the clubhouse we fired our manager and the clubhouse revolted. We went up to talk to Jeffrey to say please, let’s just keep him until the end of the year, let him win manager of the year and then we’ll fire him.

Oh, and that’s before accusing agent Scott Boras of “crocodile tears” at Jose Fernandez’s funeral (which Loria, not Boras, paid for), and calling him “a lecherous agent who manipulates owners to giving contracts to his players that those players don’t deserve,” or saying it’s “a fact” that the Padres keep fake medical files on players, or saying that popular broadcaster Tommy Hutton was only let go over money (but that players did also criticize him).  So yeah, there’s a whole lot of fire here from Samson, and that’s interesting given his current role as an analyst. Samson is also only 50, so it’s not inconceivable he could get another front-office job, but the way he’s gone in here on various important baseball figures (from Boras to Padres’ GM A.J. Preller) may reduce those chances. It certainly made for an entertaining round of interviews, though.