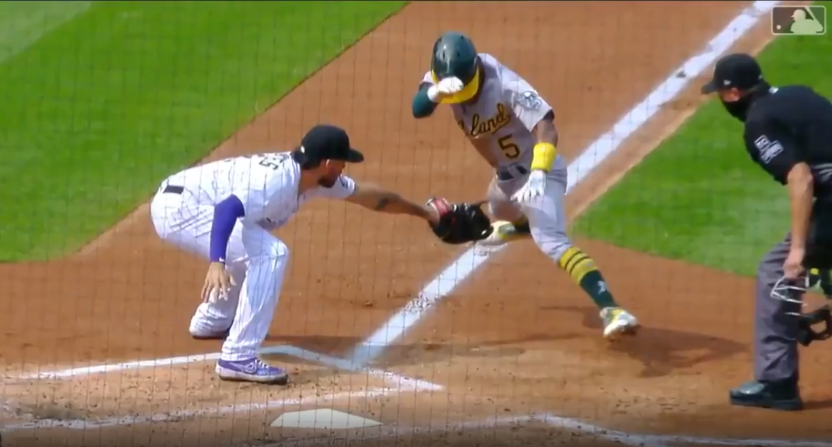 The Oakland A’s took on the Colorado Rockies Wednesday, and that game produced both a remarkable play and some remarkable commentary. With A’s runners on first and third and no one out in the top of the third inning, the Rockies almost generated a double play after Robbie Grossman hit a grounder to first. But it wasn’t to be thanks to a great move by Tony Kemp, and NBC Sports California color analyst Dallas Braden had some fun with that.

Colorado first baseman Josh Fuentes fielded Grossman’s grounder and threw to third. That caught Kemp in a rundown between third and the plate, and that rundown saw Marcus Semien (who started the play on first) tagged out by Nolan Arenado when he tried to advance to third. Even after a bobble following the tag, Arenado still threw home in what looked like time to get Kemp for a double play, but Kemp made an incredible move to get around the tag. And Braden had some fun remarks on that on the replay, including “Duck, dive, dodge, duck, and dive!”

The type of play you'll only see in 2020#RootedInOakland pic.twitter.com/zyQXLj2U5d

Here’s a transcription of the broadcast starting around 0:28. Play-by-play announcer Glen Kuiper says “It was almost a disaster for the A’s, but Kemp, it looked like, was able to avoid the tag,” and Braden says “This is a ridiculous play by Nolan Arenado. First of all, he gets the throw off, and now he’s got (Rockies’ catcher Tony) Wolters. But he sees Semien, he’s going to tag him, and now try to get Kemp at home. Which they had! But Tony Kemp, an incredible athletic move. Watch here, Marcus Semien, coming to third, and an incredible heads-up effort from Nolan Arenado, but Tony Kemp on the backside, duck, dive, dodge, duck and dive! TK!”

That would appear to be a (slightly-modified) reference to the “5 Ds” speech from coach Patches O’Houlihan (Rip Torn) in 2004’s Dodgeball: A True Underdog Story:, where they are “dodge, duck, dip, dive, and dodge.”

So that’s both a cool play and a fun announcing reference. And Braden’s had a few of the latter this year, including a fun riff on the “unbearable” incident where a teddy bear in the stands got hit by a foul ball.

Oh no. A teddy bear in Oakland was drilled in the head by a foul ball. pic.twitter.com/9fS2v6JzQ9

The A’s were 30-19 heading into Wednesday’s game, well atop the AL West. And they’ve been fun to watch, and their broadcasts have been fun to listen to. This was just the latest case of that.