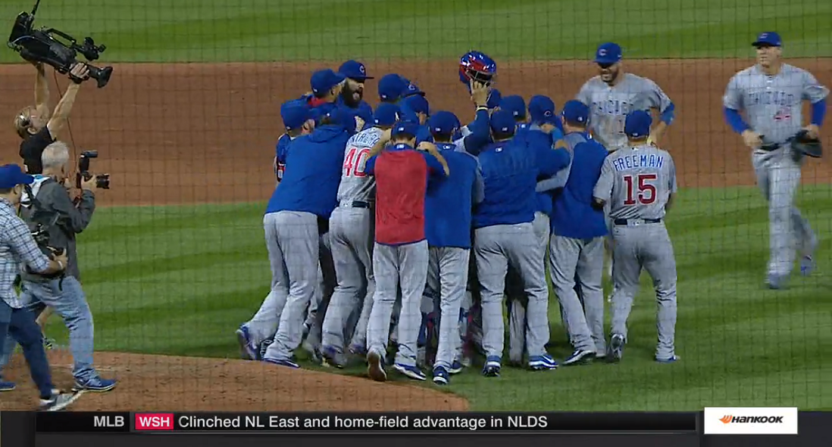 The Cubs finally went ahead and locked up the National League Central on Wednesday night. The defending World Series champions have flown a bit under the radar, likely thanks to a slowish start and other more impressive storylines, like those in Los Angeles and Cleveland.

The Cubs were two games under .500 at the All Star Break, but they’ve roared back to a startlingly good second half of the season on the strength of a resurgent offense, leading the majors in runs scored on their way to winning 90+ games and taking their surprisingly competitive division by what will likely end up being 5 or 6 games.

They clinched on the road in St. Louis, and clearly enjoyed doing so:

And then enjoyed doing so even more in the locker room after the game. John Lackey started for the Cubs, in what was likely the final regular season start of his career, and potentially his final start overall, as he’s a borderline playoff roster candidate, and likely a bullpen arm if he’s on the roster.

The whole team was clearly fired up, as Jon Lester and Anthony Rizzo both celebrated Lackey with a few choice f-bombs that CSN Chicago aired, seemingly oblivious to the potential for foul language:

That haircut reference was from Anthony Rizzo, and a nice callback to one of Lackey’s famous 2016 quotes about how he didn’t come to Chicago for a haircut. Whatever that means.

The Cubs are now guaranteed to face the Washington Nationals in the NLDS; game 1 will be next Friday in Washington. That’s an intriguing series; the Nats have been solid all year, but have played in the worst division in baseball, and Bryce Harper just returned yesterday after more than a month on the disabled list. Either of those two teams could make a run to a championship, but one of them will definitely go home after a best-of-five series.

But, when their series is over and one team is celebrating their victory, hopefully TBS is a bit quicker on the bleep button.

You know, for the children.