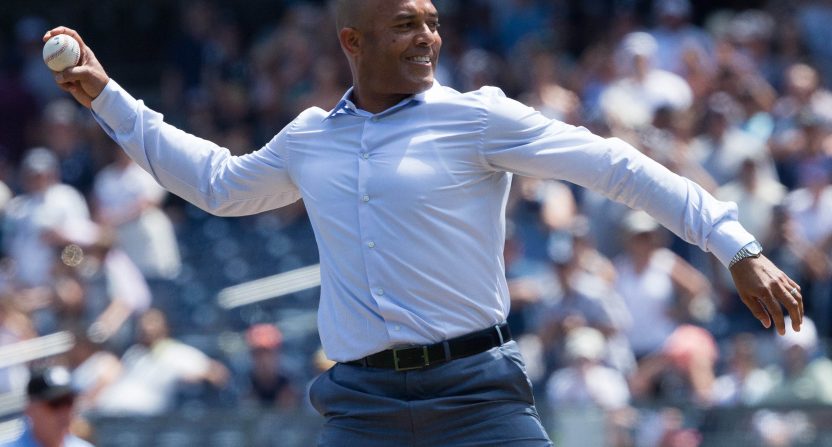 Tonight Mariano Rivera became the first unanimous Hall of Fame inductee, ending a particularly frustrating, seemingly self-perpetuating media narrative. For decades, baseball writers would seemingly go out of their way to avoid inducting a player unanimously, no matter how obviously worthy their credentials.

Why? Well, there was no good reason, but year after year, at least a few idiots wouldn’t vote for Hank Aaron, or Willie Mays, or Greg Maddux. And so it went on, most recently tested when Ken Griffey Jr. was elected with 99.3% of the vote, a new record but still shy of unanimous.

That’s what was so frustrating when one voter came out in December and said he wouldn’t be voting for Rivera. If you guessed he writes for a paper in the greater Boston area, you’d be correct, because it was Bill Ballou of the Worcester (MA) Telegram & Gazette. Here’s his original column, which outlined his reasoning by citing, among other things, an AHL goalie’s performance from one game in 2008.

On Nov. 16, 2008, in Springfield, Dakers — a second-year goalie for the AHL Worcester Sharks — stopped a mere 11 shots, most from near the blue line — in a 3-0 victory to record the first shutout of his professional career. Asked after the game how excited he was, Dakers replied, “To be honest with you, any living member of my family would have had a shutout tonight.”

And Dakers’ shutout? Just about any living major league pitcher can record a save, that’s how easy they are to come by.

That airtight logic aside, Ballou closed that column by saying he just wouldn’t be sending in a ballot at all, because while he didn’t agree with the idea of putting Rivera in, he didn’t want to be the person who prevented him from being unanimous. (In the end, three eligible voters didn’t submit ballots this year, but Rivera went 425/425 on those that were submitted.)

Thus, I’m not voting this year. A submitted blank ballot is “no” vote for every candidate, so I’m doing a Switzerland and not sending one at all.

It’s quite something to be one of the people entrusted with a Hall of Fame ballot and then to not only come out with a bad opinion but then say rather than actually express it, you’re just not going to vote. That stance was proven so unpopular even his own (presumably Red Sox-fan) readers pushed back, and Ballou ended up deciding that he would vote for Rivera after all.

All good points, and after sorting it through, I decided to vote after all and put an “X” next to five names — Barry Bonds, Roger Clemens, Roy Halladay, Manny Ramirez and Mariano Rivera.

Lost a little bit in the internet outrage was that despite the fact I distrust the save as an indicator of greatness, I could not bring myself to vote against the Yankees closer. So if I were going to vote, the ballot had to include his name.

The weird ways in which Ballou contorts himself here are fascinating.

Voting for Bonds and Clemens is somewhat progressive, so that’s good! Then he mentions that he’ll be voting for David Ortiz a few paragraphs before he diminishes the DH as a whole, and obviously he didn’t vote for Edgar Martinez, who fortunately made it in anyway.

The whole thing is a perfect illustration of perhaps the most important lesson to learn: the Hall of Fame voting pool, as with any group of a few hundred people (and especially an group of a few hundred sportswriters), is always going to come up with some weird results. That anyone finally got in unanimously is a miracle. Hopefully that narrative is now gone forever, and we’ll see writers focus more on who should get in instead of made-up parliamentary intrigue. But given how strange this voting often gets, that’s not guaranteed.