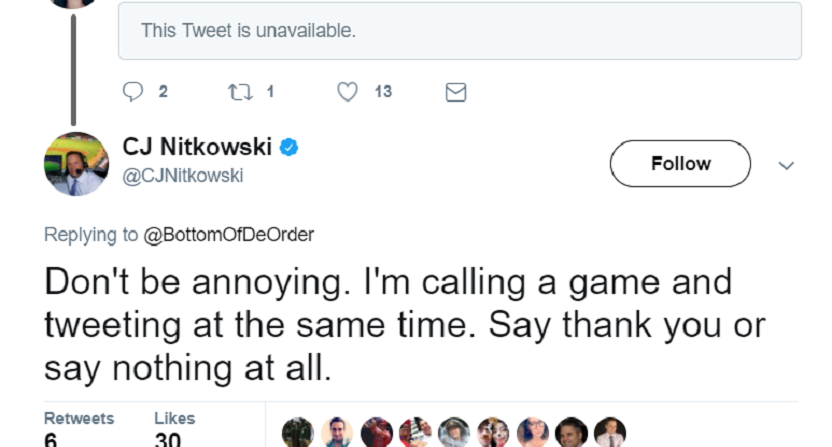 Rangers broadcaster CJ Nitkowski attempted to send out a Twitter siren announcing a key moment during Sunday’s game against the Yankees, but he didn’t quite have the details correct. Here’s the since-deleted tweet:

That’s pretty standard practice, and kudos to Nitkowski for being an ex-player-turned-broadcaster willing to be engaging on social media.

Where Nitkowski erred, though, was in the score; at the time, it was actually 7-6, not 8-7. That doesn’t materially change the message of the tweet; after all, the lure was that Judge could tie the game with one otherworldly swing of the lumber, but it was still wrong. And if you’re wrong on Twitter, someone is going to tell you about it:

Now, that’s an honest mistake from Nitkowski, and while that should be something a professional broadcaster gets right, it’s also not the end of the world that it was wrong. Still, something about that corrective tweet must have rubbed Nitkowski the wrong way, because he proceeded to have a bit of a Twitter meltdown:

Don't be annoying. I'm calling a game and tweeting at the same time. Say thank you or say nothing at all.

Yikes! That’s not the right path to go down!

No, just don't be annoying with tweets like that. So tired.

Hardly. Rangers twitter is great, you just have to kill the weeds once in a while.

The day I say thank you for pointing out a tweet error via quote tweet….that's funny.

Someone needs attention so they quote tweet a verified account hoping they get it. Hope is works.

Saga? Dramatic much? High road is an option, but telling people to stop be annoying has better long term impact. As does blocking.

I made an honest mistake. Some days I have no tolerance for the pettiness and let folks know about it. Then they get upset.

Fortunately, Nitkowski is just doing this to teach those sensitive types a lesson (that lesson will not be in self-awareness):

Thank you. Sensitive types don't like when you bite back. Apparently they think they can agitate on Twitter without a terse response.

If you’re wondering why Nitkowski might be in a bit of a bad mood, might it have something to do with the fact that the Rangers came in 28th in our most recent MLB broadcaster rankings?

Someone else thought so:

That was actually the best response of the night for Nitkowski, who in between tweets apparently went on a blocking spree:

All of Astros twitter is getting blocked by him right now in your honor, thought you should know

It has to be annoying to have to deal with MLB fans on a regular basis online, and it has to be doubly annoying when someone deigns to point out a simple and pointless mistake you make while performing one of the most difficult jobs in sports broadcasting.

There are a few ways to deal with that. Taking the simple high road of “Thanks! Honest mistake!” is probably the best option, but even if you want to go down a bit closer to the ditch in which Twitter exists, do it in a more engaging fashion than this.

Or at least be funny.

Saying that no one has a right to question you is an unbecoming stance for anyone; there probably aren’t people in the world whose word is infallible, and if there are any, they certainly don’t work as color analysts for the Texas Rangers.