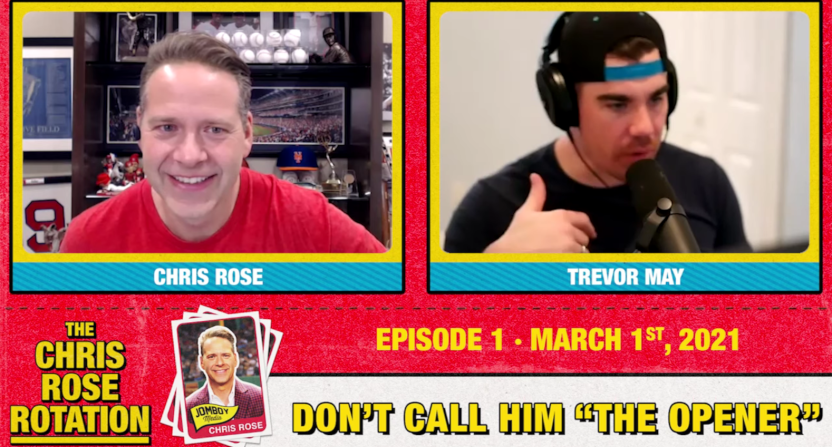 After 10 years at MLB Network, where he was particularly known for co-hosting Intentional Talk with Kevin Millar, Chris Rose left that network in December thanks to the network opting not to renew his contract. Rose now has an interesting new video podcast with Jomboy Media (which itself recently got $1 million in funding) called “The Chris Rose Rotation,” which launched Monday with an episode featuring reliever Trevor May of the New York Mets. It’s set to continue with other active players Steven Brault (Pittsburgh Pirates), Tyler Glasnow (Tampa Rays), Miguel Rojas (Miami Marlins), Archie Bradley (Philadelphia Phillies), and Lucas Giolito (Chicago White Sox) as rotating co-hosts. Here’s the episode with May:

It seems logical for Rose to be doing something that’s so tied to interviews with players, as that was a big part of what made Intentional Talk work. Beyond his chemistry with recent player Millar, Rose managed to work in a lot of interviews with active players, which would sometimes take interesting detours into subjects like fishing tips and dance moves. And this first podcast episode with May has some of that too; there’s a lot about baseball, including how challenging it has been for May to get to know his new teammates in New York in an era of COVID-19 restrictions and how May feels about the “opener” role he’s sometimes been cast in, but there are also some fun digressions, such as May discussing his passion for Twitch streaming (and issuing a challenge to Bryce Harper) and talking about which MLB player tried to talk to his sister. For those who have enjoyed Rose’s Intentional Talk interviews in the past, this new podcast may be worth checking out.

These podcasts can be found on the Jomboy Media Baseball YouTube page. The current schedule will see an episode with Brault release Thursday, March 4, and one with Glasnow release Monday, March 8. Episodes with the other rotating co-hosts will follow.