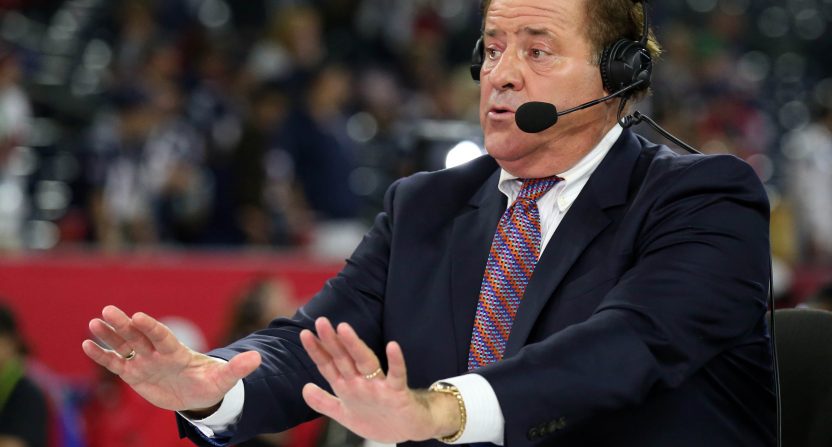 On Thursday, WEEI officially announced the rotating stable of announcers that will be calling Red Sox games on radio this year, including former Tigers play by play broadcaster Mario Impemba.

But one name on the list caused me to drop my coffee and almost fall out of my chair – long-time ESPN anchor Chris Berman.

There wasn’t much in WEEI’s article about Berman’s involvement, other than that he “will also call select games as part of the broadcast play-by-play committee”. A separate WEEI article notes that he will be calling the Indians-Red Sox series in late May at Fenway Park, though it’s unknown if that will be his only work.

Impemba and Berman aren’t the only significant names joining WEEI’s rotation. Former Mets radio voice Josh Lewin, who parted ways with the team after the 2018 season, has also been added to the team, along with current Red Sox NESN play by play broadcaster (and another ESPN alum) Dave O’Brien. Ex-Red Sox play by play broadcaster and current ESPN broadcaster Sean McDonough will also call some games, along with established WEEI personalities Lou Merloni and Dale Arnold and NESN host Tom Caron.

All of the rotating broadcasters will work alongside Joe Castiglione, who signed an extension with WEEI. According to WEEI’s Alex Reimer, McDonough will call around 30 games this year, starting on April 11th against the Blue Jays. Lewin and Impemba will each have around 55 broadcasts alongside Castiglione and there will also be three-man booths on occasion (including a May game that will feature Castiglione, McDonough, and O’Brien).

Castiglione noted that the broadcasts will be more conversational, which is a change from traditional broadcasts, but not as drastic a departure as the “talk show” format that was rumored back in December when Tim Neverett departed.

“We’ll have conversation. They’re all good baseball people,” he said to WEEI.com in a phone call. “It should flow well. We like to have good conversation –– and tell stories and have background information on players to try and personalize them. That makes the fans feel like they know these people versus ‘here’s a guy who’s hitting .302 with 20 home runs.’”

Seeing the broadcasters involved, I actually think the “talk show” description makes sense, but not in the way that many (including us) initially interpreted it. A couple of experienced play by play broadcasters calling the game and shooting the shit with some analysis can make for quite an entertaining broadcast, though it’s obviously hit or miss depending on the game itself and the broadcasters involved. When we hear “talk show” in a sports context, I think our immediate thoughts go towards a debate style show rather than a more casual, conversational show, and that’s what caused the immediate backlash towards WEEI.