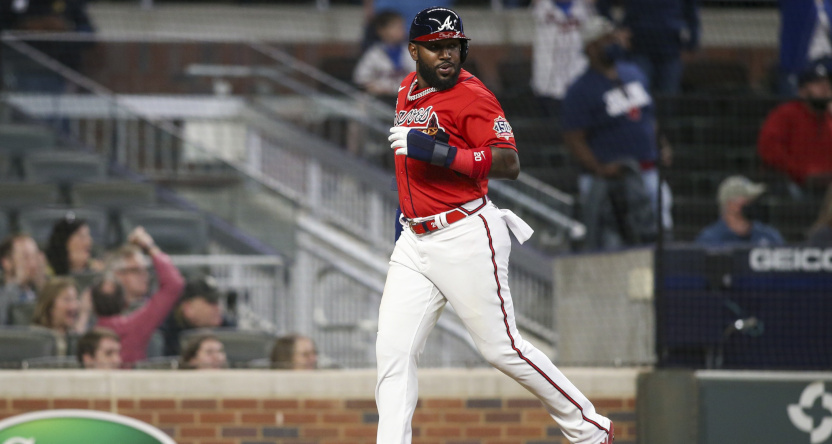 Atlanta Braves’ outfielder Marcell Ozuna suffered two broken fingers last week and would have been out for six weeks with that injury, but that’s not the primary reason he’s not currently with the team. That would be the ongoing MLB investigation into him under the league/MLBPA joint domestic violence policy following his arrest Saturday on charges of aggravated assault strangulation and misdemeanor battery – family violence against his wife. So Braves’ TV broadcaster Chip Caray’s decision to describe Ozuna (seen above during an April 23 game) as “in injury limbo” on the Bally Sports South broadcast Monday night drew some eyebrows, and some criticism. Here’s that clip:

We don’t have any context beyond that clip, but it has Caray saying “Their left field spot now that Marcell Ozuna is in injury limbo.” Yes, Ozuna is injured, but that’s not the main thing going on with him right now, especially with discussions about if the Braves might even try to eventually void his contract (Ken Rosenthal of The Athletic explored that situation in depth Monday, concluding that they may wind up having to pay out his contract anyway, but discussing that they might release him even with that cost) given this situation. It’s curious that Caray would choose “injury limbo” to describe Ozuna’s situation here, especially with those being the words he picked after a pause, and that led to a fair bit of Twitter criticism for him. Here’s some of that:

#Braves TV guy Chip Caray said it would be interesting to see what team does with left-field position while "Ozuna is in injury limbo." Really? That's the only Ozuna concern?

I thought I misheard this at first. But then again it is Chip Caray on @BravesOnBally. The Braves’ broadcast is basically what you’d put together if you had broadcast rights, a lot of money, and your only connection to baseball was WGN in the 1980s. https://t.co/ItJQoNw9JG

Did I just hear that correctly? Did Chip Caray just say Ozuna is in "injury limbo?" Let's not pretend that's the issue. @Braves, @BravesOnBally, @BallySportsSO please tell us you didn't tell him to say something like that. That's awful.

Again, we don’t know the full broadcast context, and perhaps the Ozuna situation was addressed more fully earlier. But even if it was, “injury limbo” doesn’t seem like the best word choice here. Even just “not available pending MLB investigation” would have been better. Ozuna is injured, but that’s not the largest issue going on with him.