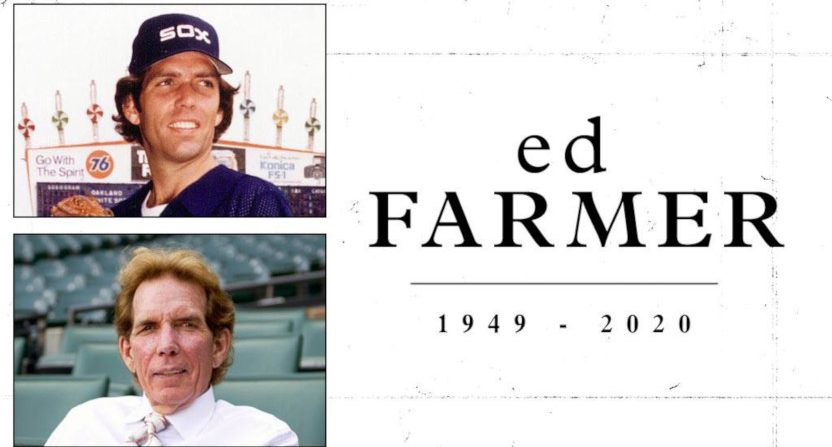 A long-time voice of the Chicago White Sox has passed on. Ed Farmer, 70, passed away Wednesday night, with the team saying his death was from complications of a previous disease. Farmer had long battled polycystic kidney disease. He was set to begin his 29th season on the White Sox radio airwaves this year; however, he called only one spring training game in February before returning home to Calabasas, California over health concerns. White Sox chairman Jerry Reinsdorf put out a statement about how much he and the team will miss Farmer:

“Ed Farmer was the radio voice of the Chicago White Sox for three decades, and he called no-hitters, perfect games and of course, a World Series championship. His experience as a major league All-Star pitcher, his wry sense of clubhouse humor, his love of baseball and his passion for the White Sox combined to make White Sox radio broadcasts the sound of summer for millions of fans. Ed grew up a Sox fan on the south side of Chicago and his allegiance showed every single night on the radio as he welcomed his ‘friends’ to the broadcast. I am truly devastated by the loss of my friend.”

Twitter filled up with tributes to Farmer  from the team, colleagues, and other media members:

We mourn the death of Ed Farmer who passed away Wednesday night.

Farmer worked as a radio broadcaster for the Chicago White Sox for nearly 30 years, played 11 seasons in the major leagues, including three with his hometown White Sox, and was a strong advocate for organ donation. pic.twitter.com/wx7itjfEYk

The @whitesox radio booth was always filled to the brim with guests.

Ed Farmer was such a loyal, welcoming friend. Scores of people have lost a piece of their heart, including me.

Never known anyone like him. Truly I haven't. And there isn't a chance on Earth I ever will again. Ed Farmer was generous. He cared about people. He was funny, often times on purpose. He knew everybody. I think, literally, everybody. Goodbye, friend. pic.twitter.com/Ripm6ao2t8

RIP my dear friend FARMIO thanks for all great time we where was together my condolences to his wife daughter and the rest of his family pic.twitter.com/gjzQGagpqJ

More Hawk on Ed Farmer: "He was just a great guy. We are all going to miss him. I know I feel bad for DJ (Darrin Jackson) too, because DJ loved him. Everybody loved him."

Ed was one of the sharpest, wittiest men I ever knew in baseball. Really sorry to hear about his passing. He was a reader and a thinker and a great companion over many a press box dinner. Rest easy, Farmio. https://t.co/RcYlkE2fqc

Ed Farmer was incredibly funny, deeply knowledgeable, and intense in his love of baseball. Loved talking with him. What awful news.

Farmer was drafted in the fifth round by the Cleveland Indians in 1967, and made his MLB debut with them in 1971. He pitched in the big leagues from 1971-83 with nine different teams, but that career was almost much shorter, as Phil Rosenthal of The Chicago Tribune writes:

By 1976, he was out of the game and might have resigned himself to life without baseball if not for encouragement from his wife, Barbara. He was working in a warehouse in Southern California, which had become his offseason home and would be for the rest of his life.
While training in preparation for a tryout with an Orioles scout in 1977, Farmer was riding his bicycle when he was struck by a car, going through the windshield and losing his front teeth.

Farmer still impressed the scout and spent much of 1977 with the Orioles’ Triple-A team in Rochester, N.Y., making just one appearance with the major-league squad, a game in which he faced two batters. One walked. The other homered. The Orioles released him the following spring.

He had a hitch with the Brewers in ’78 and was with the Rangers in ’79 before landing with the White Sox later that season on the recommendation of Jerry Krause, then a Sox scout before becoming general manager of the Bulls, in a trade that sent Eric Soderholm to Texas.

Farmer found a lot of success with the White Sox from 1979-81, racking up 30 saves in 1980 and making the All-Star Game. He then had major-league stints with the Philadelphia Phillies and Oakland A’s in 1982 and 1983, and  pitched in the minors through 1986. He then joined the Baltimore Orioles in 1988 as a scout and  joined the White Sox in December 1990 as a special assistant to the general manager.

Farmer began filling in as a game analyst on White Sox radio broadcasts in 1991, then took that role full-time in 1992. He served as the team’s regular radio game analyst through the White Sox’s 2005 World Series win, then shifted into the play-by-play role the next year, replacing the departing John Rooney. Farmer held that play-by-play role from 2006 on, and was set to begin his 15th season in that role. The tributes show how much he’ll be missed by many, and White Sox broadcasts will be very different without him.