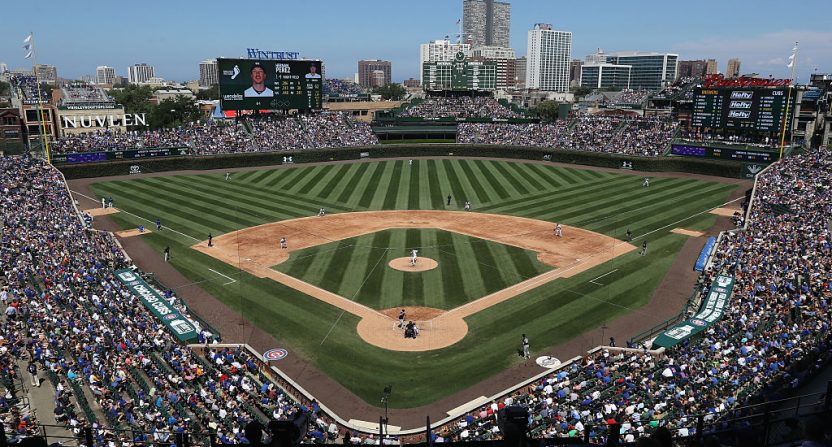 It’s a development that had been rumored for a while, but today the Chicago Cubs and Sinclair officially confirmed their partnership on the Marquee Sports Network, a cable channel set to launch in the spring of 2020 that will serve as the broadcast home of the Cubs.

The team confirmed the news in a release:

“We are excited to better serve our fans with expanded and exclusive programming showcasing our remarkable players, beloved ballpark and storied past,” said Cubs President of Business Operations Crane Kenney. “Our dedicated ‘Cubs-centric’ network will carry all available Cubs games and feature uncompromising, in-depth and behind-the-scenes coverage.”

It’s definitely a shift for the Cubs, who have worked with WGN in some capacity since 1948, and in recent years have seen game split across multiple networks, including local WGN and CSN Chicago.

This post from Bruce Levine of Chicago radio station 670 The Score offered a few more details:

Marquee will be a 24-hour all-sports cable station, Cubs president of business operations Crane Kenney said. The network will broadcast every Cubs game that’s not committed to the national television carriers — FOX, ESPN, TBS and MLB Network. Depending on the national broadcast schedule, there figures to be 145 to 150 Cubs games a season on Marquee.

Kenney and Sinclair CEO Chris Ripley will serve as the point men on the new network.

“This venture will be an all-sports station,” Kenney told 670 The Score. “I think this will be new and innovative, the way we handle our broadcast hours. We will hopefully begin with all of our spring training games being broadcast in 2020 — at the the very least, all of our home games from Sloan (Park). We don’t expect a broadcasting lull since we will broadcast baseball from February right through early November.”

If you follow the Cubs, you’ll recognize this as a very Crane Kenney statement, of course, especially given the trend of the Cubs on the field since they won the 2016 World Series. (Plus, though this should be obvious, Marquee isn’t going to be broadcasting a World Series anyway.) The Cubs will have production offices and a studio near Wrigley Field, and obviously hope to capitalize on their recent surge of fan interest. Of course, to get this deal, the Cubs had to opt out of their agreement with Comcast for CSN Chicago, which does raise the possibility of a carriage dispute in the Chicagoland area.

Distribution of the Marquee network will be the charge of the Sinclair experts. Selling the product to local carriers will be the task. The biggest hurdle figures to be with Comcast, which owns NBC Sports Chicago, which has its own regional sports partnership with the Blackhawks, Bulls and White Sox. Will there be a conflict of interest or any troubles in negotiations? Sinclair owns 190 stations throughout the country, so that may create some leverage.

As Levine notes, Sinclair being involved does afford the Cubs some leverage that other teams like the Dodgers didn’t have. It’s not hard to imagine a scenario in which Sinclair hints to Comcast that unless they carry Marquee at terms Sinclair wants, there could be issues all over the place. But the Cubs do have leverage of their own, locally, as they are easily the more popular Chicago baseball team.

Filling content for such a channel will be a challenge, though, regardless of what the Cubs are saying now. Baseball certainly provides plenty of inventory and opportunities for shoulder programming, but winter is winter, and a 24-hour network centered around just one team isn’t easy to pull off.

Maybe the Cubs can license the 2006 Rose Bowl.