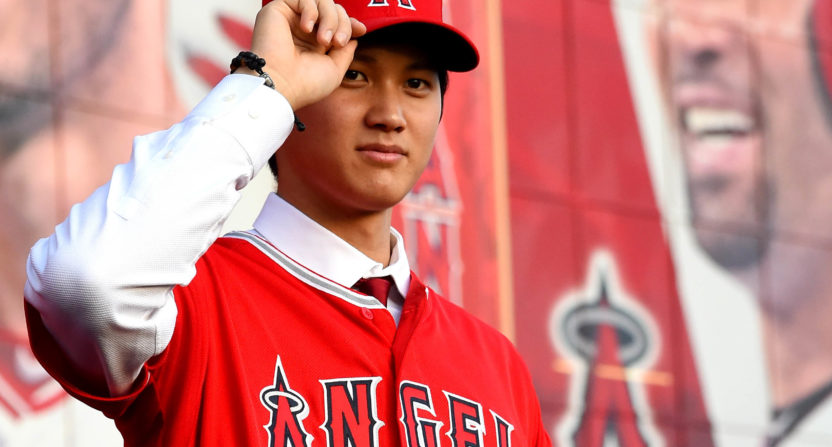 Shohei Ohtani is literally changing the game when it comes to fantasy baseball in 2018, and various fantasy platforms are going in different directions when it comes to how he’ll be used and utilized.

After doing a bunch of testing and prototyping, CBS Sports decided that Ohtani will occupy one roster spot when its 2018 fantasy baseball product launches at the end of this month, CBS told Awful Announcing. Ohtani will be eligible immediately as both a starting pitcher and as a utility hitter. Fantasy owners will then have to choose whether to use him as a hitter or as a pitcher for each game period, be it one week or one day.

“We wanted to provide the opportunity for fantasy players to really have fun with such a unique talent and a unique situation,” Brian Huss, CBS’ senior director of product development for fantasy, told Awful Announcing, “but also keep the integrity of the rest of the system and the rest of the game in place.”

CBS’ approach differs from Yahoo Sports’, which, as Awful Announcing reported last month, will be splitting Ohtani into two players, an Ohtani starting pitcher and an Ohtani hitter. An ESPN spokesperson said that the company is not yet ready to provide details on how its platform will use Ohtani at this time.

Yahoo’s decision did not specifically impact how CBS decided to approach Ohtani, Huss said. CBS explored every option they could think of, according to Huss, and gathered feedback from its fantasy sports analysts and users. Huss said that the one player approach was by far the most requested and what they were most comfortable with.

“This seemed to be the approach that was the most requested by the vast majority of users who we spoke with,” Huss said. “We just felt like it was the right approach.”

Returning CBS fantasy baseball users will only see Ohtani as a pitcher if they view the site right now, but that will change when their product goes live at the end of the month, Huss said.

In the end for CBS, Huss said having a single fantasy baseball player split into two roster spots “just felt strange to us.”

“The most important thing for us was to hear what our users wanted,” Huss said. “And as long as we were comfortable that we could accomplish that without compromising other parts of the system, that was what we wanted to do.”

Guy Lake, the product director at Yahoo Fantasy, told Awful Announcing that going with the two Ohtanis was “a matter of resourcing and effort” for the site.

“Technically, it is a lot more difficult to give a player both hitting and pitching eligibility,” Lake said. “To get our game open at a reasonable time and not move resources from other high priority projects, we opted for two Ohtanis.”

As we reported in December, the various fantasy sites had a nearly unprecedented dilemma about what to do with Ohtani, whom the Los Angeles Angels signed as the first legitimate two-way player since Babe Ruth.

“We realized that this was a tremendous change to the way fantasy has always worked,” Huss said. “We haven’t had to grapple with the idea of someone who’s going to create real value both as a pitcher and a hitter.”

It was not only a challenge from a baseball standpoint, but from the product and engineering side as well, having to account for a completely new scenario that’s never before been seen or implemented, work that Lake said was far from trivial to Yahoo.

“Both approaches are hard, but one-Ohtani is a few times more difficult.” Lake said.

What Ohtani is doing is something baseball hasn’t seen at a high level in decades, but he may not be the only two-way player for long. Brendan McKay, who the Tampa Bay Rays drafted with the fourth overall pick in last June’s draft, played 36 games as a first baseman and made six starts as a left-handed pitcher last season. Hunter Greene, who the Cincinnati Reds took with the second overall pick in June, also saw time as both a designated hitter and starting pitcher last season.

So with two-way players potentially becoming more of a trend going forward, Huss said that CBS wanted to make sure that the platform had a plan in place to account for players who were brought up as both hitters and pitchers.

“There really was that line for us between ‘this guy is a good hitter for a pitcher’ versus actually been developed,” Huss said, separating Ohtani and potentially McKay from someone like the San Francisco Giants’ Madison Bumgarner, a pitcher who happens to be very good at hitting, but was not brought up in Japan or the minor leagues as a two-way player. “We saw those as two very different use cases.”

Despite Ohtani’s two-way status being new for fantasy platforms, Huss said he did not envision CBS changing its stance on having Ohtani occupy one roster spot based on how the 2018 season progresses

“It took pains to set up the system so that we could be more flexible with this going forward,” Huss said.

CBS will keep gathering information from users as the season goes on, but they put a lot of research and thinking into its Ohtani decision and is comfortable that the site has taken the right approach in how it’ll proceed with two-way players in the future.

Yahoo will proceed in the same manner, with Lake saying that it’s possible the site could change its approach after seeing how 2018 goes with two Ohtanis, but it was unlikely.

While the offseason in Major League Baseball is progressing incredibly slowly, the buzz and excitement surrounding Ohtani’s potential impact on fantasy baseball means it will definitely be a major sports and sports media story as 2018 rolls on.

Berman will have a similar workload as in recent years.

Ferraro and Boucher are both long-time NHL media figures.

Mayne had been with ESPN since 1994, working on everything from SportsCenter to Sunday NFL Countdown to Kenny Mayne's Wider World of Sports.

Tebow last played in the NFL in 2015 with the New York Jets. He didn't play tight end in high school, college, or his previous NFL appearances, but that looks to be where he's headed.

"I am thrilled that the true story of the Lakers will finally be shared with the world -- and that we are in such capable hands with Hulu and Antoine, a director whose storytelling I’ve admired for years."

The site already has podcasts covering soccer and the WNBA.

Berman will have a similar workload as in recent years.

Ferraro and Boucher are both long-time NHL media figures.

Mayne had been with ESPN since 1994, working on everything from SportsCenter to Sunday NFL Countdown to Kenny Mayne's Wider World of Sports.

Tebow last played in the NFL in 2015 with the New York Jets. He didn't play tight end in high school, college, or his previous NFL appearances, but that looks to be where he's headed.

"I am thrilled that the true story of the Lakers will finally be shared with the world -- and that we are in such capable hands with Hulu and Antoine, a director whose storytelling I’ve admired for years."

The site already has podcasts covering soccer and the WNBA.