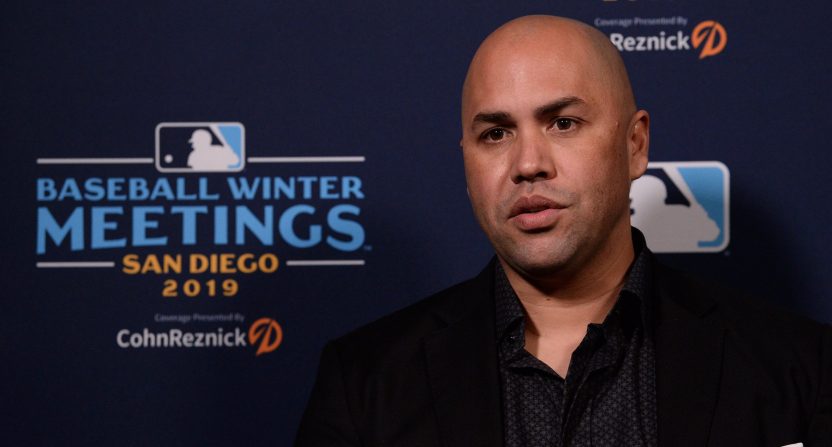 Carlos Beltran is a contributing analyst in the New York Yankees TV booth for the YES Network this season and he appears to have no shame.

Joining YES was the start of Beltran’s attempt to rehab his standing with Major League Baseball after he was briefly shunned for his role in the 2017 Houston Astros sign-stealing scandal. When the controversy was revealed late in 2019, Beltran was the newly hired manager of the New York Mets. But as more details surrounding the scandal were uncovered, the Mets fired Beltran before he was ever able to fill out a lineup card.

During the YES Network’s Thursday coverage of the Yankees and Los Angeles Angels, the broadcast discussed pitch tipping and picking up on pitchers’ tendencies. Ignoring his own controversial history, Beltran chimed right in.

Carlos Beltran acting like it’s not weird for him to talk about wanting to know what pitches are coming was baffling pic.twitter.com/wiNQAxqZ4C

“If you could find something that you could take advantage and use it to put your team in a position to win, you know, you’re gonna do it,” Beltran stated.

Yankees play-by-play voice Michael Kay asked Beltran if he would keep the information to himself, or share it with his teammates. Beltran didn’t hesitate to admit he would share the advantageous insight.

“I share my information, I want everyone to have success,” Beltran said. “A lot of times some guys, they like it, sometimes they say, ‘you know what? I don’t want to know.’ I said, ‘you don’t want to know? I want to know what’s coming!’ That would put me in position to feel good at the plate.”

Beltran was a member of the Astros in 2017, but he was also deemed to be a central figure in the creation of the franchise’s illegal scheme, reportedly telling the club their sign-stealing methods were outdated when he arrived.

“Derek Jeter was one of the guys that he didn’t want a part of it, he didn’t want to know,” Beltran divulged. Jeter and Beltran played together during the captain’s final season with the Yankees in 2014 and the Yankees traded Beltran one season before he supposedly implored the Astros to improve their sign-stealing methods.

Beltran did address the sign-stealing scandal when he joined the YES Network earlier this year, having done a sit-down interview with Kay where the former MLB All-Star admitted the Astros World Series is “tainted.”

The conversation on Thursday was more about pitch-tipping than sign-stealing. But considering Beltran’s affiliation with the sport’s most egregious cheating scandals in recent history, it was bizarre to hear him speak so openly about his desire to gain an advantage and willingness to share that information with teammates.