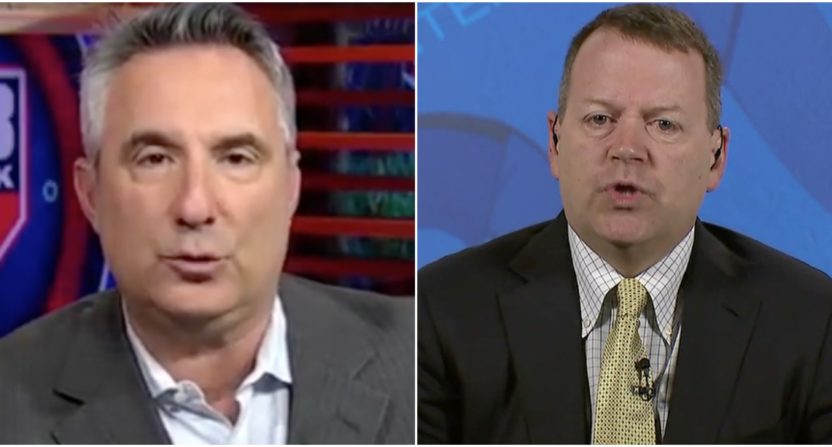 Breaking-news reporting in the internet era can be an exhausting and thankless job. Those who partake must be plugged in at all times, constantly working their phones for a scoop. Except that once a big scoop comes, the payoff is somewhat meager. Dozens of outlets aggregate the news, other reporters swarm to confirm the details and within minutes, few readers are paying attention to who had it first.

Every reporter who regularly breaks news understands these dynamics, which is largely why many of them so meticulously credit their colleagues for scoops. It’s also why some of them get grumpy if their own scoops go unrecognized.

And that brings us to the Boston Red Sox signing Eduardo Nunez on Thursday. At 6:28 p.m. ET, Robert Murray of FanRag tweeted that Boston had agreed to terms with the 30-year-old infielder, pending a physical. Twenty minutes later, ESPN’s Buster Olney reported the same news, without acknowledging Murray.

That did not please Murray’s FanRag colleague Jon Heyman, who not-so-subtly called out “some at ESPN” on Friday morning.

great job @RobertMurrayFRS on the nunez story. some at espn dont give credit, or dont think it's a story until they repeat what others have broken.

Olney was soon alerted to Heyman’s tweet and shot back that there is “too much irony in that ethics lecture to be unpacked.”

There is too much irony in that ethics lecture to be unpacked.

instead of throwing stones why don't you just give @RobertMurrayFRS credit, or at least apologize to robert, who's a hard-working young man? https://t.co/Irpnjt76rm

In a conversation with a fan arguing on behalf of Heyman, Olney said he did his own reporting on the Nunez signing and therefore did not need to credit anyone. He also pointed out that MLB.com reporter Ian Browne had, in fact, been first to tweet that Nunez and the Sox had “momentum,” and that it can be difficult to determine who was “first” when so many reporters are working incrementally.

Most provocatively, Olney seemed to accuse either Heyman or Murray of taking money from the entity they cover and even inventing stories for sources. The former allegation might (or might not!) refer to Heyman’s affiliation with MLB Network. As for the latter allegation… it’s probably better not to guess.

Didn’t take credit for anything. I don’t claim ‘exclusive,’ because I don’t fixate on timelines of reporters. Did my own reporting. I also don’t take money from the entity I cover, nor do I invent stories for sources.

Actually, if you go back and unravel the sequence, Ian Browne was the first to indicate they were gaining momentum. Not sure if he was credited. But I do my own work.

Which is why I do my own work. If you want to spend time unraveling the difference between ‘gaining momentum’ and ‘close’ and ‘really close’ and ‘agreement pending physical’ etc., go for it. Claiming scoops and credit seems silly if you’re paid by the people you cover.

id hope like most he'd just acknowledge robert had the story. i consider stealing his story the first stone

There is some personal history here, with Olney having blocked Heyman on Twitter years ago, months after the two bickered publicly over the Red Sox being “cheap,” so maybe this is little more than sparring between rivals. But ESPN has been accused of withholding credit many times before, and the subject of attribution is extremely important to many reporters, so it’s not exactly shocking that Heyman would raise a stink.

There’s no reason to doubt that Olney, an respected and reliable news-breaker, did his own reporting on the Nunez signing, and it’s hard to blame him for feeling exhausted by the game of attributing various incremental reports to seemingly everyone in the industry.

But at the same time, it’s quite understandable why Murray, a younger reporter who probably worked hard for the Nunez scoop, would feel spurned when Olney ignored him — and why Heyman would stand up for a colleague.

Nothing like a baseball reporter feud to liven up a Friday morning.