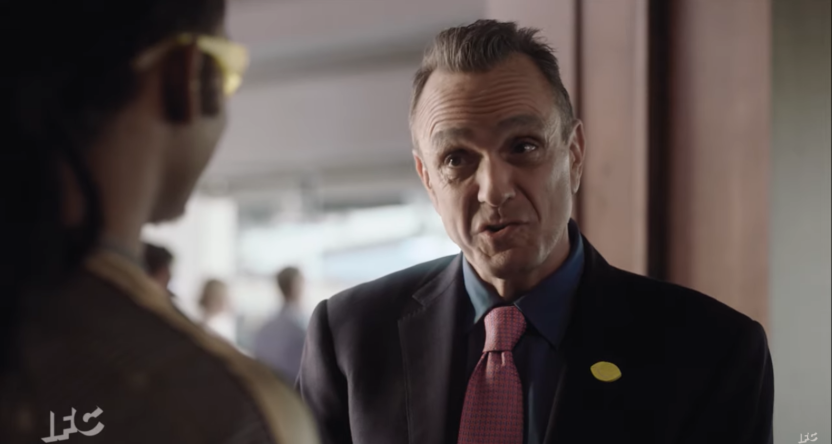 A lot of things in baseball have changed by the 2030 setting of season four of Brockmire, but apparently, the difficulty of finding the right owner for the New York Mets remains. A preview clip from Wednesday’s series finale, “The Long Offseason” (which premieres at 10 p.m. Eastern on IFC), includes titular character Jim Brockmire (Hank Azaria), now the MLB commissioner, trying to sell Charles (Tyrel Jackson Williams), the guy who started the series as the director of digital media for the minor-league team Brockmire was working with and has since become a billionaire tech tycoon, on stepping in to buy the Mets, starting around the 0:43 mark:

“How’s the zeppelin life treating you?”

“It’s pretty good. I actually went for a pre-owned dirigible, I didn’t want to overextend myself too much, but I’m enjoying sky swimming a lot. Now I’ve just got to figure out what to do with my days…and my nights.”

“Oh, please buy the New York Mets. Somebody should! Those people have suffered for long enough! And then you and I can hang out in New York all the time!”

“I hate baseball! I never once pretended to like it. I have never told you I liked baseball. When are you going to stop trying to convert me?”

“Never! I’m purposefully having my funeral at the end of a ballgame so you have to sit through the entire thing.”

That’s a sweet interaction between two characters who have gone on quite the journeys over the course of this show, from Brockmire’s struggles with alcohol and drugs in the minors through his journey to sobriety and to running baseball  and from Charles’ start as a minor-league baseball employee to his current status as a tech titan. Their friendship has survived just fine despite Charles’ dislike for baseball. But that does pose a challenge to selling the Mets. Perhaps A-Rod and J-Lo might still be interested in 2030?