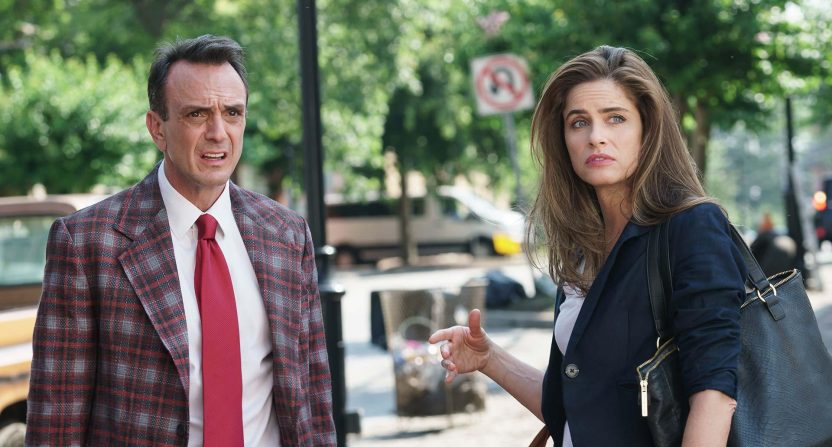 “Hey man……I wanted to thank you for recommending Brockmire.” I’ve heard this many times… because I’ve recommended the show many times. The show was uniquely hilarious, cynical,  crass , and at times poignant. It was often hard to convey how strikingly different the show was. It didn’t remotely resemble anything on television. Beneath Brockmire‘s facade of unflinching cynicism, sarcasm, and boundary pushing crassness, laid a deep deep reservoir of beautiful, messy, and complicated introspection. You’d often watch an episode and spend 90% of it with your eyes watering from nearly crying laughing only to break down and cry as the show would unexpectedly prod at some deeply-buried intimate unresolved emotion. The show wore me out. I’ll miss it dearly.

Last night, Brockmire started its fourth and final season, which once again moves the setting of the show and jumps well into the future. As I digested the final season (thanks to IFC who I imagine wanted me to write another positive review for this season), I found myself wrestling with where I landed on a lot of the creative decisions of the show. I generally adored the show, but often wondered what the show would be like if it didn’t seemingly have to break EVERY rule of television. Did the show have to move to a new city each season? Did the supporting cast need to be reshuffled every season? And perhaps the one I hear the most— did Brockmire need to get sober so early in the season?

As we say goodbye to Brockmire, I thought I’d go behind the scenes and get some answers to some of the many creative departures Brockmire made. Below is my interview with writer and producer Sheena Datt. I hope you enjoy as much as I did (the show and the interview).

What was the motivation for Brockmire to essentially move to a new city every season? Was there any thought to keeping the show in one setting for a season?

The head writer Joel Church-Cooper had always wanted to make each season feel different and new. Our challenge as writers was to come up with stories that stayed true to the character of Brockmire and served the fans of the show while also allowing Brockmire to have a realistic human journey. Each season has a different feel to it but I believe we were successful in making all of the seasons feel inherently “Brockmire“.

A somewhat common thought I have heard with fans is that they think Brockmire got sober too early in the show? Do you think that was necessary for the series or perhaps it could have been a later development?

We knew going into Season 2 that his drinking was not going to be the same as it was in Season 1, and that the season would end with him getting sober. In Season 1, his drinking was funny and stupid, but in Season 2, the reality caught up to him very fast. It was either sobriety or death for Brockmire and you know, the show is called Brockmire so he kinda needs to be alive in it. People did mention that they missed the crazy drunk Brockmire antics (Hank included) but we wanted to avoid doing multiple seasons of the same storyline per the question above—in this case Brockmire getting irresponsibly drunk and getting bailed out (also known as a “Hasselhoff”).

To us, his relationships became more of a focal point—where Season 1 was a love story between him and Jules (played by Amanda Peet) and they bonded over their shared alcoholism, Season 2 was a love story between him and Charles (played by the profoundly talented Tyrel Jackson Williams). Due to the opposite nature of Brockmire’s relationships with them, and how his relationship to alcohol was not only destroying his life but also his friendship with his only real friend, it was a natural move for him to get sober.

There are some episodes that are a bit shorter than others. Did IFC ever cut out or shorten scenes? If so, what do you wish would have aired?

Our stance when making this show—one shared by Hank, our director Mo Marable, and Joel Church Cooper, was that we are always making every effort to serve the story. If we are telling the whole story in a 20 minute episode, then we don’t really fight it. We didn’t want to touch the good spot so much we went blind. In writing, filming, production and post, we try not to let technicalities affect creative—episode length being a technicality. We were lucky to be partnered with IFC on this: they have never cut out or shortened scenes, they really just sat back and let us do our thing and trusted that the product we turned in was the best it could possibly be. And I think the work speaks for itself—we’re all incredibly proud of the show we ended up making.

From a supporting characters standpoint, the series really shuffled in and out a lot of different characters (Jules, Charles, his mom, Raj, his daughter, Shirley, Maggie, Gus). What was the motivation behind reshuffling the supporting cast as much as the show did?

From a strictly creative standpoint, not factoring in budget or schedules 🙂 —  just the nature of the way we told the story lent itself to meeting a bunch of different characters. Because Brockmire found himself in a new city every season, it stood to reason that he would create and build a new life for himself in each city, complete with new friends/well-wishers/enemies. Meeting his family was a big deal because of how much we wanted his mom to play into him realizing why he was the way that he was and why that wasn’t working. Charles and Jules were always meant to be staples in his life- in essence the family that he created when he started to put the pieces of himself back together post-Manila. It’s also just really fun to get to cast interesting talented people in new roles and watch Hank play off them. Every moment spent on set watching him and JK Simmons work together was incredibly special and amazing to watch, JK has big dick energy both in and out of character.

The final season jumps around a lot in terms of timeline. Why was the future attractive as the right way to end Brockmire?

I think we spent a lot of time exploring Brockmire’s past, and knowing that Season 4 was the final season we wanted to look ahead and see how he ended up and whether he ended up OK. There was a personal aspect to it as well—Joel Church-Cooper is a huge sci-fi fan and was able to find a way to play with a sci-fi dystopian world through his indie baseball comedy as only Joel Church-Cooper could do.

Do you think the show would have been any different if another network or streaming service had done it (more crass/raunchy, nudity, no commercials, longer eps, etc)?

Of course every network is different in process and content. We could have had a much raunchier show if we were on HBO, but we may have ended up with something more glossy or stylized. At the end of the day, IFC was the perfect partner in this show because of their unwavering support of the creative vision and their belief in the show. They really are true fans of the show- which makes the process run smoothly. They understood what Brockmire was, so our “fuck count” would go up every season. You could say they truly gave a fuck about the show.

This show has a love/hate relationship with baseball. What is the main takeaway viewers should leave with in terms of what the show says about the sport?

That there is something salvageable in that sport—because you can see how time, money, ownership and even a change in the way technology informs how we live can change and corrupt anything. But underneath all that, the spirit of baseball is still pure and beautiful and worth saving. Hank, Joel and Mo are all tremendous fans of both baseball and sports in general, so in their own way they were all looking to make a show that was a love letter to the thing they grew up watching. And even though you can see all the exterior flaws, if you look underneath you will find something really beautiful.

Were there any cameos of celebrities you were really really hoping to get but didn’t materialize? What celebrity cameos were your favorites?

We were lucky and happy to get all the cameos that we did! Joe Buck was always a joy to have on set. During season 1 when we filmed his stuff we were all blown away by his timing. He has better timing than a lot of trained comedy actors. So we ended up putting him in as much as we could just because we loved having him around and loved the way all his scenes turned out in the show—Season 4 he particularly sparkles. On a personal level (even though we ended up cutting the joke) it was fun watching Bob Costas ad-lib an F-bomb in his lunch scene with Brockmire.

How would you answer the question “What is Brockmire about and what type of person likes it?”

Brockmire is about a drunken baseball announcer who catches his wife cheating and melts down on the air—and he has to put his life back together after losing everything. But it’s also a story about a man who is terrified of how fast the world around him is moving forward—both because he’s not ready and because he’s not certain if he agrees that it’s moving in the right direction. It’s like watching your own subconscious pause and really assess what has been happening around you.

I genuinely think it’s a show that doesn’t have a typical fan—because it’s not a baseball show. It’s a human story that is packaged in baseball wrapping paper. I know a lot of people who watch it who would rather gouge their eyes out with their own thumbs that sit through a full game of baseball. So in essence—I don’t care who you are or what your story is, watch this show. You won’t regret it—and if you do, there will be no consequences for me so we’re good.

Our final question relates to the outcome of a particular relationship on the show. Read on at your own risk of spoilers.