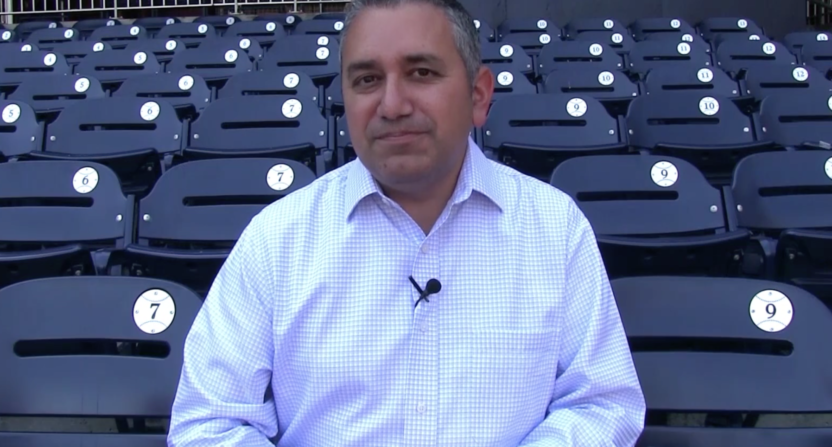 More often than you might imagine, especially with Facebook all over the news in recent months, Twitter users seeking to scold Zuckerberg wind up yelling at Zuckerman instead. Such confusion has led to an amusing running joke in which Zuckerman quote-tweets people angry with Zuckerberg, as if they’re actually frustrated with something regarding the Nationals.

“My attitude is, maybe this is a way to have a little fun with it and expose some of the nastier sides of social media,” Zuckerman said over the phone this week. “It’s turned into a nice little inside joke among my followers.”

I know it's only a spring training lineup, but some people do care about them. https://t.co/tIyuhISTu5

In one recent example of a Zuckerberg-Zuckerman goof, someone with the handle @trueprogressEP called Zuckerman “weak and spineless,” to which Zuckerman replied, “OK, I’ll go on the record and predict Reynolds makes the 25-man roster over Sanchez and Brignac.”

In another, @Debavallen accused Facebook of being biased against conservative outlets. Zuckerman responded, “Sorry, I’ve been watching baseball players hit blind golf shots over a bullpen.”

And so on. Scroll back through Zuckerman’s tweets and you’ll find hundreds of similar jokes, some better than others, all entertaining.

Zuckerman says he first received a tweet intended for Zuckerberg about five years ago. In the beginning, he simply retweeted the mistaken messages and moved along. But his followers seemed amused by the errors, so he began quote-tweeting the complaints with jokes, often ones related to the Nationals, and before long the quips were a distinct part of his Twitter identity.

Last season, MASN produced a video that was part public-service announcement, part mean-tweets segment, in which Zuckerman made light of the frequent mix-ups.

PSA: Our beat writer Mark Zuckerman is NOT Mark Zuckerberg! WATCH him read tweets directed toward the Facebook founder in our hilarious edition of "mean tweets."Hit LIKE or SHARE or spread the news that ZuckerMAN is not ZuckerBERG! #IBackTheNats ???

Zuckerman does not call out everyone who mistakes him for Zuckerberg, only those who lead him into a good joke. When the people he quote-tweets recognize their errors (which happens about half the time, he estimates), he assures them his crack was all in good fun and everyone gets a laugh.

But over time, the shtick has begun to get a bit less funny for Zuckerman. He says the tone of the tweets in his mentions has changed in recent years, with the 2016 presidential election representing a notable turning point.

“They were really infrequent at the beginning, and usually it was somebody complaining about the actual Facebook platform or some kind of technical glitch. A complaint about the website, not the person,” Zuckerman said. “But then during the 2016 election is when it picked up as Facebook was more in the news and Zuckerberg was more in the news. And that’s when it started getting a little nastier toward him, i.e., me.”

You are correct. There was no bottom of the 9th today because the home team was ahead. https://t.co/jkrALkWBtG

Back before Facebook became the bane of conservative and liberal internet-users alike, Zuckerman-Zuckerberg confusion on Twitter arrived only occasionally. But the election, Zuckerman says, caused a spike to about two or three a day, and the recent scrutiny of Facebook’s privacy practices has led to an unprecedented surge. Zuckerman says there was a day recently when he received 100 tweets meant for Zuckerberg.

Amid the recent barrage, Zuckerman decided to take a little break, and for a week or two, he ignored all anti-Facebook tweeters. But when fans began to complain in his mentions Wednesday about Facebook’s glitchy stream of the Mets-Phillies game, he couldn’t help himself.

“MLB games airing exclusively on Facebook = worlds colliding for yours truly,” he tweeted. “And not in a good way.”

As the anger toward Facebook ratchets up, Zuckerman isn’t sure how much longer he wants to wade through replies meant for Zuckerberg. The Facebook CEO will testify before Congress next week, and if the public response is too brutal, Zuckerman may call it quits. Zuckerman knows, meanwhile, that if Zuckerberg runs for president in 2020, his mentions will really light on fire.

I know Rob Manfred has talked about expanding to 32 teams, but I didn’t realize Eastern Europe was in play. https://t.co/r1GUz5msLU

He will not, however, choose a new Twitter handle or display name.

“To quote the great character Michael Bolton from ‘Office Space,’” Zuckerman said, “‘Why should I change my name? He’s the one who sucks’”

Asked what advice he would give the man whose haters he spends ample time fending off, Zuckerman suggests Zuckerberg “keep in mind what the common folks out there are concerned about, because they have a lot of complaints, and they seem to think you don’t really understand the problems in their lives.”