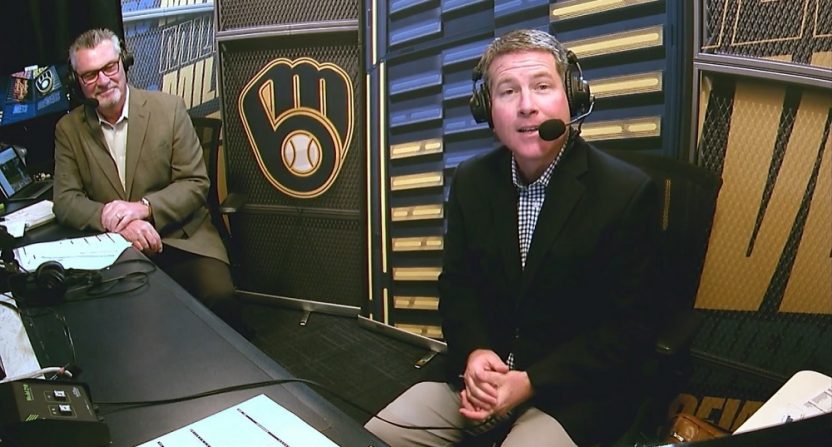 On Friday, MLB.com’s Adam McCalvy reported some news about the Milwaukee Brewers broadcast booth in 2022.

Specifically, McCalvy reported that play by play broadcaster Brian Anderson will only call 50 Milwaukee games next season on Bally Sports Wisconsin, with Jeff Levering taking over the bulk of the broadcasts. Additionally, Matt Lepay is leaving the organization after eight seasons due to his expanding work with the Wisconsin Badgers.

Some Brewers broadcasting news:
– Brian Anderson will do 50g on TV in '22 as his national profile continues to expand.
– Jeff Levering's TV role is expanding; he'll do play-by-play on all other Bally Sports WI telecasts.
– Matt Lepay's Brewers tenure is ending after 8 seasons.

On a more positive note, Bob Uecker’s role is expected to remain unchanged next season.

More re: Brewers broadcasting:
– With Levering's TV role growing, Brewers will begin the process of hiring another radio broadcaster to work road games with Lane Grindle when Jeff is on TV.
– The best news: Every expectation is that Bob Uecker's role remains unchanged for '22.

Lepay, who tweeted his thanks to the organization, confirmed he’d be doing more with the Badgers going forward. McCalvy also reported that the team wanted to bring Lepay back, but couldn’t make it work.

A huge thank you to the @Brewers for having me on the broadcast team the last 8 years. It was a blast. Long story short—-I’ll have a bit more on my plate with the Badgers, so it makes sense to step aside.

As for Anderson, it doesn’t appear that his role with Turner will completely take him away from the Brewers. Per McCalvy, Anderson signed a multi-year extension with the team in September.

No, I don't think that's correct. Brian Anderson announced in September that he signed a multi-year extension with the Brewers, and he has consistently said he loves it here and wants to stay. https://t.co/SpbZefqC91

Alright, so what *is* Anderson’s expanding role with Turner? The company has yet to announce its plans for its 2022 MLB broadcasts (which makes sense, given that the 2021 MLB season ended three days ago), but it’s the company’s first year of a new seven-year rights deal, and Turner’s weekly game is moving from Sunday afternoon to Tuesday evening. Anderson will presumably be the voice of that broadcast, which would make it impossible for him to continue to work a full schedule with the Brewers. Additionally, Anderson has been one of Turner’s main NBA voices, and will presumably continue on in a just as prominent role following Marv Albert’s retirement. That’ll take him out of an even more significant chunk of Brewers broadcasts in the first half of the season.

This is the crappy part about having an awesome local broadcaster: more often than not, a national network is eventually going to come in and try to poach them. Anderson’s a great broadcaster, and as such, his role at Turner has only been growing since he joined the company. With the company’s new MLB deal starting next spring, getting Anderson on more games seems like a sensible move for them. Unfortunately for Brewers fans, that means he’ll be on fewer of their broadcasts going forward.